TERRORIST WALKS: POSADA FREE TO BE IN MIAMI 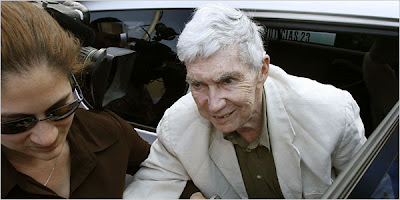 They did it. They released known terrorist Luis Posada Carriles.

Around the world there is nothing but anger at this hypocritical action of the Bush regime.

Lawyer Jose Pertierra, who represents the Venezuelan government in the request to extradite the terrorist, said from Washington that the decision makes a mockery of US justice.

Guatemala's Presidential Commissioner for Human Rights, Frank La Rue shortly before the release became a reality stated, "It would be a scandal for the international justice system and an insult for victims and their relatives if Posada Carriles is freed." Director of the Legal Action Center for Human Rights, Edda Gaviola condemned Washington's decision and criticized their stand as the champion against terrorism while protecting men like Carriles. Hector Nuila, general secretary of the Guatemalan National Revolutionary Unity, demanded that the US fulfill its international obligations and try Posada Carriles or grant the extradition request from Venezuela.

The Mexican press in dozens of headlines reported the release of the international terrorist and condemned it roundly.

El Salvador wants nothing to do with the guy. Salvadoran President Tony Saca said his country would not open the doors to the aging anti-Castro Cuban militant Luis Posada Carriles. Saca said that if Posada arrived in the Central American nation he would be arrested on document falsification charges dating back to 2000, when he allegedly entered Panama on a false Salvadoran passport. Posada lived in Salvador during the nation's 1980s civil war.

Nicaragua will request the extradition of Luis Posada Carriles, President Daniel Ortega announced Thursday, while he condemned the terrorist's release by US authorities.

Wayne Smith, a retired U.S. diplomat and Cuban affairs analyst said, "Posada's release shows the Bush administration's position against terrorism for the cynical sham it is. It takes us back to one man's terrorist being another's freedom fighter."

Under the Patriot Act, Atty. Gen. Alberto R. Gonzales has had the option of declaring Posada a terrorist and detaining him indefinitely.

Secretary of State Condoleezza Rice also is empowered to keep Posada imprisoned by declaring his release a threat to stable international relations.

An editorial in the Los Angeles Times declared,

"WITH A MISGUIDED decision upholding bail for Cuban-born terrorist Luis Posada Carriles, the U.S. 5th Circuit Court of Appeals in New Orleans has done more than free a frail old man facing unremarkable immigration charges. It has exposed Washington to legitimate charges of hypocrisy in the war on terror.

... Posada is the Zacarias Moussaoui of Havana and Caracas. Moussaoui is serving a life sentence without parole in a federal prison in Colorado for conspiracy in the 9/11 attacks; Posada is free to live in Miami.

The U.S. government has done many odd things in 46 years of a largely failed Cuba policy, but letting a notorious terrorist walk stands among the most perverse yet."

Posada traveled to Miami after his release. His arrival there yesterday afternoon set off mixed reactions among the area’s many Cuban exiles, who see him as both a patriot and an embarrassment.

“We have been fighting this war on terror, and here we are releasing a man who has a history of terrorist acts and is a fugitive of justice in other countries,” said Elena Freyre, executive director of the Cuban-American Defense League, a moderate exile group in Miami. “It’s absolutely appalling.”

In Havana, Camilo Rojo, the son of a Cubana de Aviacion official who died aboard the bombed plane, told the Agence France-Presse news agency that Posada's released showed "a lack of respect for all the victims of terrorism, not only in Cuba but throughout the world."

The following is taken from La Demajagua (Cuba)

Statement from the revolutionary government of Cuba

Cuba condemns the shameful decision to release terrorist Luis Posada Carriles and points to the United States government as the only one responsible for this cruel and despicable action, which seeks to buy the terrorist’s silence regarding his crimes in the service of the CIA, particularly during the time when Bush Sr. was that agency’s general director.

With this decision, the U.S. government has ignored the clamor that has arisen throughout the world, including in the United States, against the impunity and political manipulation involved in this action.

This decision is an insult to the people of Cuba and other nations who lost 73 of their sons and daughters in the abominable 1976 attack that brought down a Cubana de Aviación civilian airliner off the coast of Barbados.

This decision is an insult to the people of the United States themselves, and a categorical refutation of the so-called "war on terrorism" declared by the government of President George W. Bush.

The U.S. government had only to certify Luis Posada Carriles as a terrorist to prevent his release and, in line with Section 412 of the U.S. Patriot Act, to acknowledge that his release would "threaten the national security of the United States or the safety of the community or any person."

The U.S. government could also have implemented the regulations enabling Immigration and Customs Enforcement to detain a foreigner who is not admissible to U.S. territory and subject to deportation.

For that, it would have sufficed for U.S. authorities to have determined that Posada Carriles is a threat to the community, or that releasing him would involve a flight risk on his part.

Why did the U.S. government allow the terrorist to enter U.S. territory with impunity, despite the warnings sounded by President Fidel Castro?

Why did the U.S. government protect him during the months he remained illegally in its territory?

Why, having all the elements to do otherwise, did it limit itself this past January 11 to charging him with lesser crimes, essentially immigration-related, and not with what he actually is: a murderer?

Why is he being released, when Judge Kathleen Cardone herself, in her April 6 ruling ordering the release of the terrorist, admitted that he was accused of "...having been involved in, or associated with, some of the most infamous events" of the 20th century? Some of the events include "the Bay of Pigs invasion, the Iran-Contra affair, the 1976 bombing of Cubana Flight 455, the tourist bombings of 1997 in Havana, and even — according to some conspiracy theorists — the assassination of President John F. Kennedy."

Why is the U.S. Homeland Security Department’s Immigration and Customs Enforcement agency not using the mechanisms it has at its disposal for maintaining the terrorist in prison, with the irrefutable argument, already used by the U.S. Attorney General’s office on a date as recent as this past March 19, that if he were released, there is a risk that he could flee?

Why has the U.S. government ignored the extradition application submitted, in line with all relevant requirements, by the Bolivarian Republic of Venezuela?

How is it possible that today, the most notorious terrorist who has ever existed in this hemisphere is being released while five Cuban men remain in cruel imprisonment for the sole crime of fighting terrorism?

For Cuba, the answer is clear. The terrorist’s release has been organized by the White House as compensation so that Posada Carriles will not divulge what he knows, so that he won’t talk about the countless secrets he holds in relation to his long career as an agent of the U.S. special services, in which he acted as part of Operation Condor, and in the dirty war against Cuba, Nicaragua and other nations in the world.

The full responsibility for the terrorist’s release and the consequences deriving from it, fall directly on the United States government, and most particularly on the president of that country.

Even now, after his release, the U.S. government has all the information and legal mechanisms to re-arrest him. All that is lacking is the political will to seriously combat terrorism, and to recall that, according to President Bush, "if you harbor a terrorist, if you support a terrorist, if you feed a terrorist, you will be as guilty as the terrorists."

Translated by Granma International
Posted by Oread Daily at 11:21 AM