STILL WITH US, BUT BARELY 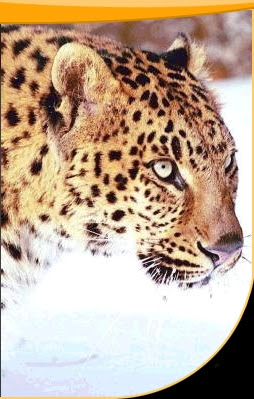 The Amur leopards are listed in international, federal and regional levels as critically endangered and are in immediate danger of extinction. With maybe no more that 34 left on the planet, the future of this beautiful cat seems extremely bleak.

Recognized as one of eight leopard subspecies and named for the Amur River that forms much of the border between China and Russia, it has a long winter coat and is easily distinguished from other leopards by its large rosettes. Many specialists consider it to be the most beautiful of the leopards. It certainly is a remarkable large cat, in some ways reminiscent of the snow leopard. In the sixties and seventies the Amur leopard was still found in considerable numbers in former Manchuria in China, on the Korean peninsula and in the southern part of Primorye in the Russian Far East. The Amur leopard is now restricted to a small patch of habitat in Southeast Russia along the Chinese and Korean borders

Major causes of the Amur leopards decline have been due to:

Habitat destruction caused by wildfires which burn unattended and out of control.

Elimination of its prey, hunting both legal and illegal (poaching) have all played a role in reducing the leopards to a fragment of its former habitat.

The Amur leopard is also being poached for its beautiful coat and for its bones.

The following is a release from the World Wildlife Fund.

Amur Leopard Remains on the Brink of Extinction, Scientists Say

Vladivostok, Russia—A new census of the world’s most endangered cat, the Amur or Far Eastern leopard (Panthera pardus orientalis), shows that as few as 25 to 34 are left in the wild, renewing fears for the future of the species.

In February and March, World Wildlife Fund along with the Wildlife Conservation Society and the Pacific Institute of Geography of the Russian Academy of Science, conducted a routine snow-track census of leopard numbers.

“The recent census confirmed once again that the Amur leopard survives on very shaky ground,” said Pavel Fomenko, biodiversity conservation program coordinator at the Far-Eastern branch of WWF in Russia.

“From my perspective, the leopards’ exact number is not the big question.” Fomenko said, “What is really important is that the predator is on the brink of extinction. And still a unified protected area with national park status has not been established, which is the most important thing for the leopards’ survival.”

At least four leopard litters were encountered during the census. This is a good sign because it means that the population is not completely depressed and is still able to restore itself. But for long-term survival, at least 100 animals are needed.

“Conservation of large predators needs vast territories with minimal anthropogenic changes, which is difficult,” said Dr. Dmitry Pikunov, the coordinator of the 2007 leopard census and head of the laboratory of animal ecology and conservation of the Pacific Institute of Geography of the Russian Academy of Science.

According to Dr Pikunov, a mature leopard needs 500 square kilometers of habitat with good forests and high and stable amounts of ungulates, including deer. Two to four female leopards would live in the same amount of land, reproduce and nourish their cubs.

“Maybe this is the reason why leopards practically completely disappeared from the Korean Peninsula and north-east China,” said Dr. Pikunov. “At the beginning of the past century, the Far Eastern leopard was a common species in the southern parts of Sikhote-Alin and in some Khanka lake areas. Right now it roams only in south-west Primorye.”

About 5000 square kilometers of land in the south-west Primorye region, close to the border between Russia, China and North Korea, were transected for the census and tracks left by the leopards in the snow were counted. Scientists were able to determine the number of the leopards by examining the shape, size and patterns of the tracks as well as determine the direction and time of the animals’ movement.

In all, 35 field workers took part in the census, working in more than 158 transected sections.

“The snow track census is an important method to monitor leopard numbers. We see that its population has been balancing on the edge of survival for many years,” said Dr. Dale Miquelle, director of the Wildlife Conservation Society’s Russia program and coordinator of the previous census in 2005.

“But to understand the reasons, we should research the ecology of the predator in a more profound way, using latest techniques such as automatic camera traps, radio tracking, genetic and veterinary research.”