ANTI-SEMITISM IN ISRAEL - SAY WHAT? 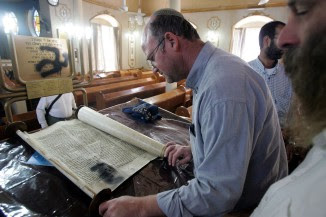 Below you are about to find an article that I had to read twice to believe.

The Jewish Telegraph Agency (JTA) reports that in recent years sporadic acts of anti-Semitism have hit Israel, most of them carried out by disaffected immigrant youths from the former Soviet Union. Although the youths came to Israel under the Law of Return, they are among those who identify not as Jews but as ethnic Russians.

Experts say the perpetrators of such acts feel rebuffed and marginalized by Israeli society, so they turn their furor into the same anti-Semitism with which they may have been tormented in their countries of birth.

Zalman Gilichinsky, who immigrated to Israel from Moldova, started a center for victims of anti-Semitic attacks or harassment.

"Neo-Nazism is the same development they see in Russia and they transplant it here," he said, referring to the youth.

Gilichinsky said he has been frustrated by what he sees as the relative lack of seriousness with which Israel has taken the issue.

Gilichinsky claims Israel is embarrassed by the issue, which he said stems from too many non-Jews being allowed into Israel under the Law of Return.

Roughly one-quarter of immigrants who have come to Israel since the major wave of immigration began from the FSU in the early 1990s are not considered Jewish according to halacha, or Jewish law.

"Israel wants to maintain its image as a refuge from anti-Semitism and neo-Nazism, so they don't want to publicize anything that would go against that image," he said.

Gilichinsky said that according to the calls his center receives, there are almost daily incidents. They are exacerbated, he said, by connections forged online between young immigrants here and their counterparts in the FSU through neo-Nazi Web sites and chat rooms.

David Zelventsky runs a museum at an immigrant club in Hadera about Jews who fought for the Red Army during World War II. He said much still needs to be done to tackle anti-Semitism around the world, including in Israel.

It was hard for him to see the swastikas and slurs against Jews spray-painted on the center's walls, but he was not necessarily surprised.

"I've seen many things in my lifetime," said Zelventsky, whose father was a World War II veteran. "What I know is that it is too early to lay down arms in the battle against anti-Semitism."

The following is from AFP.

Rabbi Avraham Levine never imagined that years after immigrating from Russia to Israel he would fall victim to a brutal anti-Semitic attack in the heart of the Jewish state.

But less than three months ago, he was beaten up by teenage skinheads as he walked home in the city of Petah Tikva on Tel Aviv's outskirts.

"They jumped on me, beat me and cursed my mother in Russian, then they returned with sticks and beat me up. My arm was broken but only God saved my life," said Levine, 38, who arrived in Israel from Russia in 1995.

"They shouted 'Zhids leave Russia!' In Russia, I would hit someone if he said 'zhid.' How can someone do it in Israel?" he said.

"Zhid" is a derogatory term in Russian for a Jew, roughly equivalent to north America's "kike."

The number of incidents with a neo-Nazi, fascist or anti-Semitic streak has increased dramatically over the past 15 years in the Jewish state, which prides itself of being a safe haven for Jews from all over the world, according to the Dmir Centre, which monitors and assists victims of such attacks.

Although the Jewish state is no stranger to anti-Israeli attacks, a new trend has developed since the 1990s -- anti-Semitic attacks carried out by "Jewish" citizens, says the centre's chief Zalman Gilichenski.

The vast majority of these incidents are thought to have been carried out by Russian nationalists who identify with anti-Semitic ideology, says Gilichenski.

"Nowadays it has become a phenomenon," says Gilichenski, a 40-year-old ultra-Orthodox who had emigrated from Moldova in 1989.

The nationalists came to Israel as part of the massive immigration wave from former Soviet states in the 1990s. While they are Jewish under Israel's law of return -- meaning that either they, one of their parents or one of their grandparents are Jewish -- they do not consider themselves as Jews.

Gilichenski receives reports of anti-Semitic incidents in Israel on a daily basis and he estimates there are some 500 incidents a year in Israel.

Official figures are hard to come by -- the police, and justice and interior ministries all refuse to provide statistics.

And Israeli police are reluctant to brand the incidents as anti-Semitic, instead using the term vandalism for racist attacks and desecration of graves and synagogues.

"The law does not provide us with the ability to even define an incident in Israel as being of an anti-Semitic character, and they all fall within the general term of vandalism," says one justice ministry official who asked to remain anonymous.

Petah Tikva police station closed Levine's case without finding the assailants, saying it was "an isolated case which does not reflect a trend", even though a series of similar incidents have occurred there in recent months.

Gilichenski says the authorities turn a blind eye: "Israel is very swift to criticise anti-Semitism abroad but remains silent in the face of anti-Semitism within."

There is no law explicitly banning anti-Semitism in Israel, because such a situation was never imagined by the lawmakers, he said.

According to Gilichenski, the increasing trend is partly due to the fact that out of the nearly 1.2 million immigrants who have arrived from ex-Soviet states since the early 1990s, over 300,000 do not consider themselves Jews, according to official figures from the Immigrant and Absorption Ministry.

"People who do not identify themselves as Jews arrive here, after learning about the Jewish people from the most extreme sources of anti-Semitism in former Soviet states," Gilichenski said.

"There is a group of several dozens anti-Semites in almost every Israeli city. All in all, there are several hundreds neo-Nazis in Israel," he says.

Despite the lack of official statistics, expressions of anti-Semitism and neo-Nazism in Israel are abundant.

Dozens of school and synagogue walls have been sprayed with swastikas and racist slurs in Russian in recent years. The most serious incident was recorded when the great synagogue of Petah Tikva was vandalised and desecrated with anti-Semitic slurs in May 2005.

The same month, military police arrested a soldier of Soviet origin who had a Nazi swastika tattooed on his arm and who said he hated Jews.

Shortly afterwards, another soldier was indicted for setting up the first neo-Nazi website in Israel, which included links to the text of Adolf Hitler's Mein Kampf and a photo of him and two other soldiers performing a Nazi salute in uniform. He was sentenced to 200 hours community service.

Avner Shalev, chairman of the Yad Vashem Holocaust memorial museum, says that the anti-Semitism in Israel reflects "popular anti-Semitic stereotypes in Europe, especially Ukraine, which are very hard to counter."

The extremists shy away from talking to reporters -- repeated messages left at an Israeli Russian nationalist website, the "Russian Nationalist Centre," went unanswered.

But the website itself offers a glimpse into the world of anti-Semites who live, work and are citizens of the Jewish state.

Among its goals is to "accustom Russian people living in Israel to Russian national culture and awaken national consciousness," to prevent "any and all forms of Russian people converting to Judaism," to help Russians in Israel return to the motherland, and prevent "Jews from returning to Russia."

In statements posted on the website, the nationalists say they choose to live among the people they despise because their duty is to help fellow Russians get in touch with their roots.

"If we don't help them choose their destiny, what kind of nationalists are we?" says the site, vowing that "in any case sooner or later we'll all return to Russia."

Faced with this grim reality, Gilichenski believes that "here in Israel the phenomenon is much more dangerous because there are many targets and potential victims."
Posted by Oread Daily at 2:35 PM