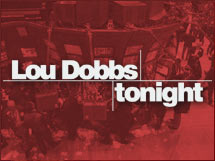 The following was written by Bill Berkowitz, our old pal, out in the Bay Area. It appears at the web site of Working For Change.

06.01.06 - On the May 23rd edition of Lou Dobbs' nightly CNN program "Lou Dobbs Tonight," the generally affable talk-show host, who has become the network's go-to-guy on immigration issues, repeated a racist conspiracy theory and ran a graphic provided by the white nationalist Council of Conservative Citizens to illustrate his point.

For quite some time, Dobbs has made immigration issues an integral -- some might say dominant -- part of his nightly program.

During a piece about "illegal immigrants" in Utah, reporter Casey Wian said, "Utah is also part of the territory some militant Latino activists refer to as Aztlan, the portion of the southwest United States they claim rightfully belongs to Mexico." At that point, the network ran a map of the United States with the states of California, Nevada, Utah, Colorado, Arizona, New Mexico and Texas browned out and labeled AZTLAN.

"For more than two years... Dobbs has served up a populist approach to immigration on... segments of his newscast entitled 'Broken Borders,'" the Southern Poverty Law Center's Heidi Beirich and Mark Potok reported in the Winter 2005 issue of the Intelligence Report. Dobbs, "has relentlessly covered the issue, although hardly from a traditional news perspective -- Dobbs favors clamping down on illegal immigration, and his 'reporting' never fails to make that clear. He has covered the same issues, and the same anti-immigration leaders, time after time after time."

Over the past several months -- perhaps in response to the massive pro-immigrant demonstrations held in dozens of cities across the country -- Dobbs seems to have gotten more emotional and has repeatedly crossed the line between fair-minded debate and outright fear-mongering.

In a recent press release, Fairness and Accuracy in Reporting (FAIR), a longtime media watchdog group, pointed out that anti-immigrant fervor was being stirred up on a regular basis by Dobbs on his nightly program. FAIR pointed out that "Dobbs' tone on immigration is consistently alarmist; he warns his viewers of Mexican immigrants who see themselves as an 'army of invaders' intent upon re-annexing parts of the Southwestern U.S. to Mexico, announces that 'illegal alien smugglers and drug traffickers are on the verge of ruining some of our national treasures,' and declares that 'the invasion of illegal aliens is threatening the health of many Americans' through 'deadly imports' of diseases like leprosy and malaria."

In addition to hosting his own program, Dobbs has appeared on other CNN programs. And he co-hosted, along with the network's lead anchor, Wolf Blitzer, the coverage of President Bush's prime time speech on immigration a few weeks back.

"Dobbs has run countless upbeat reports on the 'citizen border patrols' that have sprung up around the country" since the Minuteman Project's April 2005 "paramilitary effort to seal the Arizona border," Beirich and Potok pointed out.

In addition, during the run-up to the Minuteman's first campaign, Dobbs gave the organization "millions in free publicity, plugging it for weeks and turning over large segments of his air time to directly promoting the project," Marc Cooper, a contributing editor of The Nation told AlterNet.

And while Dobbs still has a fair number of guests opposing his position, "there's one thing Lou Dobbs won't do," Beirich and Potok pointed out; "No matter what others report about the movement, Dobbs has failed to present mounting and persistent evidence of anti-Hispanic racism in anti-immigration groups and citizen border patrols.

"It's not that Dobbs hasn't allowed a pro-immigration activist or two to complain about efforts like the Minuteman Project ('vigilantes,' according to President Bush), or even that he has made racist statements on his show. What the anchorman has done is repeatedly decline to present the evidence that links these groups to racism, calling the very idea 'mind-boggling.' On his July 29 show, he called the ACLU and the Southern Poverty Law Center, which he said he liked in other ways, 'despicable' and 'reprehensible' for saying otherwise."

The Southern Poverty Law Center's (SPLC) Intelligence Report catalogued a number of occasions when Dobbs overlooked controversial statements, inflammatory websites and white-supremacist connections of some of his anti-immigration guests:


Glenn Spencer, the head of the anti-immigration American Patrol, has been interviewed at least twice on the program. His website contains "anti-Mexican vitriol" and he "pushes the idea that the Mexican government is involved in a secret plot to take over the Southwest." Both the SPLC and the Anti-Defamation League lists Spencer's organization as a "hate group." Spencer has spoken at events sponsored by the white supremacist Council of Conservative Citizens and American Renaissance, a group that contends that blacks are genetically inferior to whites. Spencer has also predicted that "thousands will die" in a supposedly forthcoming Mexican invasion.

Virginia Abernathy served as the head of the national advisory board to Protect Arizona Now, the anti-immigration organization that sponsored Arizona's anti-immigration referendum. Dobbs, who repeatedly reported on the measure, never mentioned that Abernathy "was a long-time white supremacist... and an editorial adviser to the racist Council of Conservative Citizens.

Last year, during a segment on the Minuteman Project, Joe McCutchen, "who heads up an anti-immigration group called Protect Arkansas Now, [and] had written a... series of anti-Semitic letters to the editor and given a speech to the Council of Conservative Citizens" was quoted. Dobbs, who described the Minuteman Project as "a terrific group of concerned, caring Americans," made no mention of McCutchen's connections to white supremacist groups.

On Oct. 4, Dobbs hosted Paul Streitz, a co-founder of Connecticut Citizens for Immigration Control, on his program. "Streitz denounced Mayor John DeStefano Jr. for "turning New Haven into a banana republic" by favoring identification cards for undocumented workers. Two days later, newspapers revealed that two of the group's other founders had just quit, saying Streitz had led it in a racially charged direction. Dobbs has never reported this."

Barbara Coe, leader of the California Coalition for Immigration Reform, was quoted on a show last March bitterly attacking Home Depot for "betray[ing] Americans," mainly due to the fact that "Hispanic day laborers often gather in front of the store looking for work." Dobbs never reported that her group is listed as a "hate group" by the SPLC, "or the fact that she routinely refers to Mexicans as 'savages.'"
It isn't everyday that the Council of Conservative Citizens (CCC) is cited as a source by CNN, or any other credible news outlet. It was surprising that Dobbs would truck out a CCC-sourced graphic to illustrate the Aztlan conspiracy theory.

The CCC, which had its fifteen minutes a few years back when it was revealed that Senator Trent Lott (R-MISS) had a long-term relationship with the group, prefers to keep a relatively low profile.

The organization was founded in the mid-1990s as an outgrowth of the Citizens Councils of America -- groups formed in the mid-1950s as part of a white segregationist response to federally mandated integration of public facilities.

Leonard Zeskind, an author who has researched white supremacist groups for more than a quarter of a century, told the Kansas City Star that the CCC had "a several-year track record of successfully marrying the white supremacist fringe types with local and state Republican politicians and thereby having an influence in the mainstream discourse."

Zeskind pointed out that the CCC is kind of a "bridge group," connecting openly racist right-wing groups to pragmatic politics. Though there may be no evidence suggesting the CCC holds the violent views or intentions of racist groups such as the neo-Nazi Aryan Nation, its perspectives on race are much the same, Zeskind told the newspaper.

Dobbs is "revered in anti-immigration quarters and on the far right generally," Beirich and Potok reported. He won the 2004 Eugene Katz Award for Excellence in the Coverage of Immigration, given by the Center for Immigration Studies, an organization that "claims to be a 'nonpartisan research institute,' but in fact is a thinly disguised anti-immigration organization."

On May 25, the St. Louis CCC Blog posted a shout out to Dobbs -- discovered by The Huffington Post's Alex Koppelman -- with a headline saying: "Welcome Lou Dobbs" and text reading "I knew you were one of us all along. Also, thanks for the proper citation, on CNN, no less."

The CCC will be holding its annual conference on June 16 and 17 at the Holiday Inn in Clarksville, Indiana Holiday Inn, a suburb of Louisville, Kentucky. There's no word whether Dobbs was invited to speak at the event.

Dobbs only screams so loud because there are still so many people who have their fingers in their ears and won’t listen. There is nothing that he reports that is not factual; that you might disagree does not make it wrong. That the rest of the media only reports the pro-illegal immigration side does not make Dobbs wrong either, in fact it makes him a true journalist.