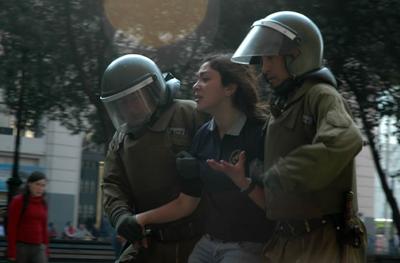 High School students in Chile have been demonstrating for weeks demanding education reform. Yesterday, they took it all up a notch with 600,000 taking to the streets.

The students began with modest demands such as reduced fares on public transportation and the elimination of a $38 fee for an exit exam that lets them apply for college. They demanded that three hours recently added to the school day be dedicated to sports, the arts or other activities.

The movement spread from Santiago to the provinces, and the demands expanded to include deep reforms of the country's education law - against the ‘Ley organica constitucional e Enseñanza’ (LOCE) issued by former dictator Augusto Pinochet in March 1990, a day before leaving power. Students say LOCE favors private school at the expense of public schools, which are run by the municipalities, increasing the gap between rich and poor in access to education.

The following is from the Santiago Times (anything but a leftist rag).

In the largest education-related demonstration in Chile in the past 40 years, an estimated 600,000 protestors took to the streets Tuesday to voice their complaints about the nation’s “unfair” and lackluster public education system. Much of the organizing of the protest was carried out over the Internet or by cell phone, organizational tools unavailable to previous generations of students.

Students at Chile’s public schools - where half the nation’s students are currently enrolled - score much lower on nationwide college entrance examinations than do students at private high schools.

Teacher salaries and prestige are low at public schools, and infrastructure oftentimes decrepit or lacking. Most parents with good incomes place their children in private high schools in an effort to secure the best possible education. They believe education at the nation’s public schools limits their children’s future options.

The demonstration was sparked by public school student demands for greater access to low cost transportation and free college entrance examinations. But when government officials failed to show great concern, the issue quickly took hold across the nation and drew greater and greater public support.

Perhaps spurring the student unrest are the well-publicized windfall profits the government now enjoys as a result of sky-high copper prices. The state-owned Codelco mining company will earn the State US$11 billion in 2006 – money President Bachelet said would mostly be invested abroad in order to keep the US$ dollar from further strengthening the Chilean peso and thus reducing Chilean fruit and wine exports (ST, May 22).

Tuesday’s manifestly peaceful student protesters were joined by uncontrollable street elements – bands of marauding youths not dressed in high school uniforms – who took advantage of the situation to vandalize stores and provoke the police. Police responded with water canons and tear gas to disperse protestors in some areas, especially in central Santiago where many protestors were heading toward the Ministry of Education.

By 3 p.m. Tuesday afternoon, police had arrested more than 300 people in the greater Santiago area.

Many of the protesting high school students remained in their high schools – either “on strike” (not attending classes) or engaged in “tomas” (taking over the school premises).

On Monday, student leaders said they hoped for the participation of more than 300,000 students in Tuesday’s protests, about 200,000 in the Santiago area and 120,000 in other parts of the country. Their goals appeared to have been exceeded.

Further south, in Concepción, 4,000 students gathered in the local Plaza de Armas in solidarity with the call for a nationwide strike. Students in Temuco, Valparaiso and Punta Arenas also participated in the strike.

In Santiago about 100 private high schools shut down to join the strike as well. Private school student leaders said they wanted to create a united student front. Also supporting the nation strike were members of the teachers’ union (Colegio de Profesores) and organized labor (Central Unitaria de Trabajadores, or CUT).

However, many university federations held a day for discussion and reflection about education issues on their own campuses instead of marching.

Tuesday morning President Michelle Bachelet convened a meeting with her cabinet to discuss the government’s response to the student strikers. Education Minister Martín Zilic met with students at the Biblioteca Nacional around 2 p.m. Zilic was harshly criticized by students for failing to attend a meeting scheduled Monday (ST, May 30)

Interior Minister Andrés Zaldívar met with senators Tuesday afternoon to discuss congressional support for reforming the Ley Orgánica Constitucional de Enseñanza (LOCE). The LOCE was one of the final laws passed during the dictatorship of Gen. Augusto Pinochet and went into effect just days before the Concertación government took power in 1990.

It made official the decentralization of most of the nation’s primary and secondary educational institutions, turning over a large part of public education at this level to the municipalities. It also permitted the beginning of partially state-financed private schools—“subvencionado” schools, in many ways comparable to charter schools in the U.S.—and private universities.

Former President Ricardo Lagos commented that efforts to reform the LOCE in the early 1990s, when he was Education Minister, failed because of the opposition of right wing political parties.

There are three problems with the LOCE as regards public schooling, said Loreto Engaña of the Interdisciplinary Investigation in Education Program (PIIE).

First, it introduced free market concepts—including profit-making—into the nation’s education system, and did little to improve the quality of the nation’s education. Second, it resulted in schools receiving government state subsidies without their having strong curriculum requirements and quality control.

‘’This is the only country in the world … that permits a profit from public funds with no greater control or accountability than the results of the SIMCE (national achievement test),’’ Engaña said. According to many education officials, there are insufficient ways for the government to punish bad schools.

Third, says Egaña, LOCE allows the subvencionardo high schools to “select” their students, which in practice leads to discrimination against students who, for whatever reason, cannot enter a better high school. Students who have learning disabilities or who are very poor end up in the worst schools because they will require the most resources to teach.

In response to the nationwide strike, ex-Minister of Education Sergio Bitar said that the coordination and maturity of the students is more advanced now than in previous years and ´´thus the response that should be in the society and the government should be more advanced and more complete as well.’’
Posted by Oread Daily at 11:29 AM