AND THE SHOW WENT ON 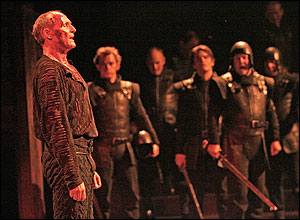 About 300 police officers from four southern Ontario forces and about a kilometre of fencing went around the perimeter of the Stratford Festival to ensure its gala opening-night show went on.

Protesters targeted the festival in a push for improved benefits for the poor, including a hike in Ontario's minimum wage from $7.75 an hour to $10.

In a bit of irony, perhaps, the play being staged was William Shakespeare's Coriolanus, an exploration of what happens to a country when an impoverished mob sets out to overthrow the well-fed establishment.

The following comes from the CBC.

Organizers had warned that the demonstration would be much bigger, predicting that 400 people would be on hand for an attempt to shut down the Shakespearean theatre festival for the evening.

About 300 police officers were on the scene to deal with problems. They staffed a kilometre-long fence surrounding the theatre. Protesters, shouting slogans such as "Make the rich pay," gathered by the gates where theatre patrons entered.

The protest was largely peaceful, with only a few runs at the fence to keep police busy. There were no reports of arrests.

The curtain rose without a hitch on the evening's play, Coriolanus, which stars Colm Feore and Martha Henry.

The protesters were calling for the Ontario government to raise welfare rates, increase the province's minimum wage from $7.75 to $10 an hour and reinstate the special diet allowance.

They said previously that they chose the festival's opening night because it usually draws prominent politicians, business leaders and celebrities. Last night's attendees included former Ontario premier Bob Rae and Karen Kain, chair of the Canada Council for the Arts and artistic director of the National Ballet of Canada.

Stratford Mayor Dan Mathieson told the London Free Press that he thought the protest was misdirected. The prominent festival provides many jobs in the southwestern Ontario community, he said.
Posted by Oread Daily at 11:45 AM