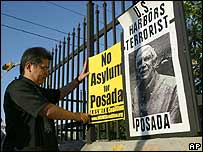 Chavez told a crowd: "We have requested extradition because it's been demonstrated that it was these two terrorists, manipulated and paid by the gringos and by the Venezuelan coup-plotting, terrorist opposition, were the ones that placed the bombs."

Former Army Lts. Jose Antonio Colina and German Rodolfo Varela were both freed Friday in Houston. They have denied any involvement in the Feb. 25, 2003, bombings at the Spanish Embassy and Colombian Consulate that left four injured. They said Chavez accused them because they belonged to a group of officers who occupied a Caracas plaza in 2002 and futilely called for rebellion against his government.

They had been detained by U.S. immigration officials since 2003 after they requested asylum in Miami. Neither were granted that request, but they instead will be placed under supervision requiring weekly telephone calls and monthly meetings with U.S. immigration agents, their lawyers said.

This, however, isn't the only case where the War Against Terror seems limited only to certain terrorists.

There is the pesky case of Luis Posada Carrile and Orlando Bosch who worked together to blow a Cuban passenger plane out of the sky. Last week Miami's Channel 41 provided a unique glimpse into the mind of a terrorist when it interviewd Bosh about the plane bomging.

Here are some excerpts from the television interview:

Orlando Bosch: If I tell you that I was involved, I will be inculpating myself . . . . and if I tell you that did not participate in that action, you would say that I am lying. I am therefore not going to answer one thing or the other.

Juan Manuel Cao: In that action 76 persons were killed (the correct figure is 73, including a pregnant passenger)?

Orlando Bosch: No chico, in a war such as us cubans who love liberty wage against the tyrant, you have to down planes, you have to sink ships, you have to be prepared to attack anything that is within your reach.

Juan Manuel Cao: But don´t you feel a little bit for those who were killed there, for their families?

Juan Manuel Cao: ¿And the fencers? The young people on board?

Orlando Bosch: I was in Caracas. I saw the young girls on television. There were six of them. After the end of the competition, the leader of the six dedicated their triumph to the tyrant etc etc. She gave a speech filled with praise for the tyrant. We had already agreed in Santo Domingo, that every one who comes from Cuba to glorify the tyrant had to run the same risks as those men and women that fight alongside the tyranny.

Juan Manuel Cao: If you ran into the family members who were killed in that plane, wouldn't you think it difficult . . . ?

Orlando Bosch: No, because in the end those who were there had to know that they were cooperating with the tyranny in Cuba.

Bush refuses to extradite any of these terrorists. Some "War on Terror."

The following comes from VHeadlines

So, why isn't Bush extraditing Posada Carriles back to Venezuela to face justice?

VHeadline.com commentarist Mary MacElveen writes: This past Tuesday at the Tribeca Film Festival, located in New York City, the special airing of Flight 93 occurred and, by all accounts, it was met with many different emotions. Jan Snyder who lost her daughter, Christine, on that fateful flight had this to say: ''It's time for this. The public needs to know, they need to remember and know what the families have gone through.'' She even stated that she sees these visions in her head everyday.

I can fully understand that since a child is not supposed to die before their parent.

According to the AP: "the screen went dark after the stomach-turning sequence showing the plane's nosedive. The theater was silent except for the gut-wrenching sobs and wails from the loge, where the relatives were seated together." That must have been so hard for those left behind to see what it was like just minutes before their loved ones died at the hands of terrorists.

When someone says "try walking in my shoes" in order to understand any loss they have gone through ... this one I cannot. While I have lost children, it was by an act of God, not at the hands of hateful people.

Ken Nacke whose brother Louis died on that flight had found himself "rooting for a different outcome." That is a very natural feeling to have especially as one live on going through the different levels of grief. It can take years to go through each and every stage, only to find through viewing a movie of how your loved one died, going through all the stages yet again.

I do not know how the psyche of the American people will fair once this movie is shown to a much wider audience on A&E (Arts and Entertainment) network here in the United States. Each person's reaction will be different since psychology can not state exactly how each and everyone of us will react.

But, I am of the opinion that all family members left behind of those killed on Flight 93 want some form of justice and so far the Bush administration has not delivered it by capturing Osama bin Laden. That is the most important thing we have to remember. Isn't his capture still important to the American people? If his capture means nothing to you, then you really need your head examined.

If we as Americans still want justice done for anyone who dies at the hands of terrorists, we do have a terrorist residing here in the United States and his name is Luis Posada Carriles.

In October, 1976, the midair explosion of Cubana Airlines plane flying out of Barbados killed all 73 people aboard.

He (Carriles) was later implicated in this bombing by two Venezuelans, Herman Ricardo and Freddy Lugo. Ricardo worked for Carriles security firm where he stated that it was Carriles who masterminded this bombing.

Sound familiar? When Luis Posada Carriles was arrested he was found with a map of Washington showing the daily route of to work of Orlando Letelier, the former Chilean Foreign Minister, who had been assassinated on 21st September, 1976. In 1985 Carriles escaped a Venezuelan prison with the help of Jorge Mas Canosa, the head of the Cuban American National Foundation (CANF), an organization created under Ronald Reagan.

Carriles is to Venezuela and Cuba what Osama bin Laden is to us.

While Bush has stated in the past of bin Laden: "I do not know where he is" those family members who lost loved ones thirty years ago and still go through their stages of grief know where their terrorist is. He (Carriles) is in Miami, Florida.

So, why isn't Bush extraditing him back to Venezuela to face justice?

The Sun-Sentinal reported: "In September, an immigration judge ruled that Posada should be deported, but said that the aging militant could not be sent to Cuba, where he was born, or Venezuela, where he is a naturalized citizen, because of the potential that he would be tortured."

So, here we are the United States whose pledge of allegiance states: "With liberty and justice for all" ... yet we also tortured alleged terrorists in Abu Graib and at Guantanamo Bay.

I first find that hypocritical to be worried if he will be tortured and he is a proven terrorist. Where is the justice for those who died on Cubana Airlines? I am sorry, but this does not make sense, but maybe it does and I am about to go out on a limb here. Are these American lives more precious than the lives of those on Cubana Airlines?

Answer that in your heart.

The Sun-Sentinal also reported of Carriles that he "was set to be interviewed Wednesday by immigration officials after he applied to become a U.S. citizen, his lawyer said."

Why are immigration officials even entertaining letting him apply for citizenship?

Why are they even meeting with him in the first place?
Bush once said after 9/11: "You are either with us or with the terrorists" and this action by the United States immigration department clearly shows that we are on the side of terrorists.

With the full airing of Flight 93: Will it bring forth our anger at terrorists?

If it does, the productive thing for all of us to do is to demand of our elected officials that Luis Posada Carriles is extradited back to Venezuela. We must also demand that Osama bin Laden be captured once and for all to bring justice for those on Flight 93.

Both Carriles and bin Laden took the lives of innocent human beings.

If this piece finds its way into the hands of anyone who lost a loved one on September 11th, 2001, you will see that you are connected with those who died on Cubana Airlines. I am asking you as a fellow American to use your voice to demand justice for those on Cubana Airlines. You are the voices that people in power will most likely listen to ... you are after all kindred spirits.

The thing that separates both groups of victims is that we know where Carriles is ... he is evading justice at the hands of the United States government.

The commonality is what Jan Snyder said: "they need to remember and know what the families have gone through.''
We must state in a united voice that this terrorist Carriles be sent back to Venezuela to face the justice he has evaded. Let that be our reaction when Flight 93 airs.