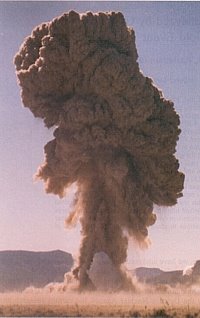 The following announcement is from the Western Shoshone Defense Project.

While this test is not nuclear in composition, its purpose, according to DTRA documents, is to “simulate a low-yield nuclear weapon.” Given that previous nuclear tests have occurred only a few miles away from where Divine Strake will occur, this test raises the specter of kicking up previous radioactive contamination and sending it downwind. We have been told too many half-truths and outright lies to believe in the “safety” of this test. Furthermore, no full environmental impact statement has been done to verify that there is no radioactive contamination at the particular site.

As tensions increase with Iran, speculation has increased in the media and elsewhere that this test, in conjunction with other military projects, is building up to an imminent attack on the peoples of Iran, possibly in the form of nuclear bombardment. This test is seemingly a “war game” to initiate a U.S. led invasion of Iran. Many media articles about Divine Strake and its possible role in the escalation of tension with Iran may be found on www.shundahai.org/divine_strake.htm and www.disarmamentactivist.org

Because our goal is to stop the test, and to not expose anyone to undue health risks from the actual blast, our focus will be an International Day of Action on Sunday May 28, 2006 (Memorial Day Weekend) at the Nevada Test Site Peace Camp, located across Highway 95 from the Test Site. We are looking for allied organizations to join our coalition, and either join us at the Nevada Test Site on the 28th, or stage actions in their own communities throughout the following week.

Some of our anticipated activities will be:
¨ Delivering eviction/deportation notices to the U.S. Department of Defense and Department of Energy as illegal, non-respecting immigrants to indigenous lands.
¨ A rally with speakers from indigenous, immigrant, nuclear abolition, and peace and justice communities.
¨ Non-violent direct action training
¨ Peacekeeper training
¨ Workshops on the history of the test site and radiation compensation, indigenous sovereignty, and the escalation with Iran.
¨ Spiritual ceremonies to remember those who have suffered or died as a result of war and nuclear weapons testing.
¨ Brainstorming workshops on what common actions folks can do later in the week in their respective cities
¨ Vigil activities at U.S. Federal Buildings and Bechtel Corporation offices on June 1 and June 2, if the test has not been canceled.


Some of our anticipated needs are:

¨ Getting the word out to sympathetic communities
¨ Development of fliers and other outreach materials
¨ Optimizing media participation both before, during and after the event
¨ Providing shelter, food and water to participants
¨ Organizing workshops
¨ Providing “peacekeepers” to keep the event on message and free of violence.

Ongoing activities – Please keep the phone calls, letters coming!
The test detonation can be cancelled. We call for the United States Government to do so immediately. Concerned citizens can call or write to express their opinions to their Congressional Representatives and: