Uganda, scary place, very scary place if you are gay.  In Uganda, they don't just talk about it, they do it.  They kill you.  Not subtle like here...

The following is from Can It Happen Here.

Some places, they just kill the queers

Since the Tucson shootings we've had the usual back and forth in the United States about whether hate rhetoric can really be blamed when some individual, with whatever unknowable stew in his brain, acts out the violence that others airily chatter about.

In Uganda, it's pretty clear that the verbal violence of homophobia became reality with the murder of David Kato. Kato was one of Uganda's most visible gay activists.


NAIROBI, Kenya -- An outspoken Ugandan gay activist whose picture recently appeared in an antigay newspaper under the headline “Hang Them” was beaten to death in his home, Ugandan police said Thursday.

David Kato, the activist, was one of the most visible defenders of gay rights in a country where homophobia is widespread and government leaders have proposed executing gay people. Mr. Kato and other gay people in Uganda had recently warned that their lives were endangered, and four months ago a local paper called Rolling Stone published a list of gay people, with Mr. Kato’s face on the front page.
He was attacked in his home Wednesday afternoon and beaten in the head with a hammer, said Judith Nabakooba, a police spokeswoman. But police officials said they did not believe this was a hate crime.
“It looks like theft, as some things were stolen,” Mrs. Nabakooba said.
Gay activists disagreed and said Mr. Kato was singled out for his outspoken defense of gay rights.
“David’s death is a result of the hatred planted in Uganda by U.S. evangelicals in 2009,” Val Kalende, the chairwoman of one of Uganda’s gay rights groups, said in a statement. “The Ugandan government and the so-called U.S. evangelicals must take responsibility for David’s blood!”
New York Times, 1/27/11

Cops seldom will admit that hate crimes occur in their jurisdictions: they too often share society's prejudices or just want to 'protect' against their city or country getting a 'bad' rep. 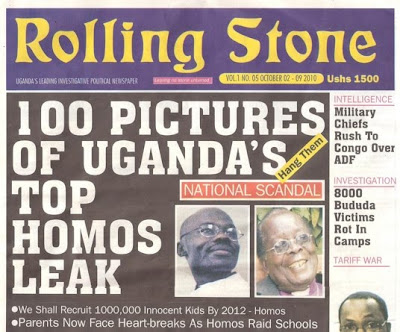 The tabloid newspaper that repeatedly fanned the flames of anti-gay hatred (which has no relationship to the US magazine with the same name) bills itself grandly as "Uganda's leading investigative political newspaper." They may be overdoing it making that claim, but there's no doubt that this sort of paper can be influential. See our own New York tabloids stoking outrage about the downtown Islamic Cultural Center last summer.

On the particular tabloid cover pictured above (there were a series of these inflammatory covers, I believe), that's Mr. Kato on the left and the Rt. Rev. Bishop Christopher Senyonjo, the former Anglican bishop of Western Buganda in Uganda on the right. Bishop Christopher has spoken out for years against attacks on gay Ugandans, simply pointing out that these despised people are human beings too. More on Bishop Christopher here.

Mr. Kato is dead -- and that's all the more reason why LGBT people and their friends in safer places need to demand that Ugandan authorities stop the violence. The notorious "Anti-homosexuality Bill" that would criminalize gay lives and even gay advocacy isn't dead; its author, M.P. David Bahati, who has been lionized by U.S. evangelicals, intends to bring it back after Parliamentary elections. President Obama and Secretary of State Hillary Clinton have denounced the legislation. They need to be heard again. In the United Kingdom, the government needs to look again at asylum claims from Ugandan gay people; for some people, this is a matter of life or death.
Posted by Oread Daily at 4:14 PM