Castro Has Something To Get Off His Chest About Copenhagen

Fidel discusses the failures of the climate summit where, "...the blind selfishness of a privileged wealthy minority tries to bring the burden of the necessary sacrifices to weigh heavily on the overwhelming majority of the inhabitants of the planet." Castro called the brutal attacks on protesters a reminiscent of the Nazi occupation of Denmark.

The following is from Earth Times. 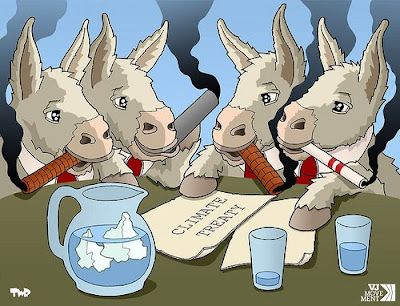 On 26 December 2009 European Council on International Relations published two letters by Fidel Castro analyzing the results of Copenhagen Climate Summit. The letters entitled The Moment of Truth and the second one The Truth About Copenhagen : The truth of what happened at the summit are a cold, full of valuable inside information and précised description of the causes the led to the failures of the Summit Climate. We present small selections from these important documents describing the atmosphere and the tension of the Copenhagen summit. In a press conference that presented to the public this letters Professor Anton Caragea, president of European Council on International Relations described the two letters as documents on the way that leaders of the world failed to agree on important issues regarding conservation of life on the planet, two letters of extensive information, powerful analytic skills and decisive stands wrote by a world renowned intellectual and political figure: Fidel Castro.

In this letters Fidel Castro writes: „ As it is widely known, the UN Agreement on Climate Change was signed in Kyoto in 1997. This instrument bound 38 industrial nations to cut down their greenhouse effect gas emissions to a certain percentage in comparison with those of 1990. The European Union countries committed to an 8% as of 2005, the year when most of the signatories had already ratified it. George W. Bush, then President of the United States, –the largest greenhouse effect gas producer country which is responsible for one-fourth of such emissions—had rejected the agreement since the midst of 2001. The other UN members continued their efforts. The research centers proceeded with their work. It is evident by now that a major catastrophe is threatening our species. Perhaps the worst could be that the blind selfishness of a privileged wealthy minority tries to bring the burden of the necessary sacrifices to weigh heavily on the overwhelming majority of the inhabitants of the planet. That contradiction can be perceived in Copenhagen where thousands of people are standing firm by their views.( …) The social movements will not be allowed to attend. After that show, the "Summit" will resume its works in the plenary hall until its inglorious closing. Since television has carried the images, the world has seen the fascist methods used against the people in Copenhagen. The protesters, most of them young people, have won the solidarity of the peoples. Despite the maneuvers and deception of the leaders of the empire, their moment of truth is drawing closer. Their own allies are losing confidence in them. In Mexico, the same as in Copenhagen or elsewhere in the world, they will be met by the growing resistance of the peoples that have not renounced the hope to survive. (Fidel Castro –The Moment of Truth).

In the second letter Fidel Castro is even more clear in pointing the finger to the responsible of the Copenhagen failure : " If anything significant was achieved in the Danish capital, it was that the media coverage allowed the world public to watch the political chaos created there and the humiliating treatment accorded to Heads of States or Governments, ministers and thousands of representatives of social movements and institutions that in hope and expectation traveled to the Summit's venue in Copenhagen. The brutal repression of peaceful protesters by the police was a reminder of the behavior of the Nazi assault troops that occupied neighboring Denmark on April 1940. But no one could have thought that on December 18, 2009, the last day of the Summit, this would be suspended by the Danish government –a NATO ally associated with the carnage in Afghanistan– to offer the conference's plenary hall to President Obama for a meeting where only he and a selected group of guests, 16 in all, would have the exclusive right to speak. Obama's deceitful, demagogic and ambiguous remarks failed to involve a binding commitment and ignored the Kyoto Framework Convention (….) A small number of countries firmly insisted on the grave omissions and ambiguities of the document promoted by the United States, particularly the absence of a commitment by the developed countries on the reduction of carbon emissions and on the financing that would allow the South countries to adopt alleviating and adjustment measures (…) After a long and extremely tense discussion, the position of the ALBA countries and Sudan, as President of the G-77, prevailed that the document was unacceptable to the conference thus it could not be adopted. In view of the absence of consensus, the Conference could only "take note" of the existence of that document representing the position of a group of about 25 countries".( Fidel Castro-The Truth about what happened at the Summit )
Posted by Oread Daily at 1:20 PM