THE LAWSON FILE: VIRGINIA CITIZENS IN FIGHT OF/FOR THEIR LIVES 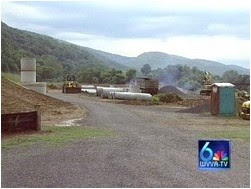 It all began back in the spring of 2006 when the Cumberland Park Project resulted from an agreement between the Giles County Partnership for Excellence (GCPE) and American Electric Power. The proposed project was expected to ultimately result in a commercial site built upon a coal combustion waste (CCW) structural fill within the 100-year floodplain of the New River in Giles County, Virginia.

Well, guess what, some locals weren't all that thrilled with the deal after they did a little research. They discovered amongst other things similar structural fill sites have contaminated streams in Pennsylvania and groundwater in Maryland, and one site in neighboring Roanoke County has even become a Superfund site.

These citizens formed the Concerned Citizens from Giles County (CCGC). They believe that the health and safety of their community are at risk due to inadequate state and federal regulation of wastes.

The Cumberland Park Project is a planned coal combustion waste structural foundation fill. It is located in the flood plain of the New River, a National Heritage River, and it will not have a landfill liner. Despite its legality, it is clearly a threat to human and environmental safety.

Ordinarily, reports the Roanoke Times, those disposing of it would have to protect nearby groundwater sources from contamination. The storage site would need to be lined and monitoring wells would be required to make sure the metals weren't leaching into nearby streams, rivers or the underground water table.

But because the fill proposed for Giles has a "constructive purpose," those requirements are waived, even though the site is just off the New River and the potential for contamination is high.

"Coal combustion wastes release toxic heavy metals when they come in contact with water. The National Academy of Sciences has found that this effect wreaks havoc on aquatic ecosystems, often causing fish kills and debilitating mutations. The EPA has even published data that identifies cancer risks for humans drinking this contaminated water to be orders of magnitude above their suggested risk limits."

Environmental groups have been alarmed at the groundwater contamination by heavy metals from coal fly ash. The Appalachian Voice reports that incidents have taken place all over the country where old fly ash deposits have broken loose, contaminating neighborhoods, threatening health and reducing property values. Fish and other species die quickly when directly exposed to fly ash, and those exposed indirectly accumulate heavy metals in their bodies, harming the ecosystem and posing a serious health risk to anglers among others.

Undeterred, the coal and utility industries keep insisting that fly ash is harmless.

However back in 2003 the EPA identified over 70 sites nationwide where fly ash and similar coal power plant waste has contaminated surface and groundwater. The next year, 130 environmental groups petitioned the federal government to stop allowing fly ash to be dumped where it could come into contact with drinking water supplies.

The cancer risk from arsenic is one of the biggest issues with fly ash. People drinking groundwater contaminated by a landfill that did not use a plastic liner had a 10,000 times greater than allowable risk of cancer, the EPA said. Other risks include high levels of mercury, lead and other heavy metal contaminants.

At the time, EPA put off a decision on new regulations for 18 months. Five years later, regulations have yet to be written, although two years ago, a National Science Foundation report urged EPA to begin regulation.

Again let me say communities in Indiana, Pennsylvania and Maryland have already experienced severe fly ash problems. Water supplies had to be shut down in 2004 in the town of Pines, Indiana, and families were provided with bottled water after molybdenum showed up the town’s drinking water

In November 2007, some 34 residents of Gambrills, Maryland, filed a class action lawsuit against a power company, saying that their water was contaminated by a fly ash disposal site. The suit was filed because the claimants felt that a previous $1 million fine, levied against a utility by the state environmental agency, was inadequate.

Keep this crap out of my neighborhood.
CCGC filed an unusual lawsuit asking for a grand jury investigation into the controversial coal waste project on the banks of the New River. The suit was based on a section of Virginia code that allows court-appointed citizens to investigate public nuisances.

“You’re just looking at a catastrophe waiting to happen,” said Britt Stoudenmire, one of the participants in the lawsuit. “Fly ash is fairly benign if it’s controlled – but when you put the stuff near groundwater, it is a much bigger issue.”

The Grand Jury was formed and ruled IN FAVOR OF THE BAD GUYS.

None of the petitioners who filed suit in the case was interviewed, said their lawyer, John Robertson.

The jury foreman read the seven-member group's 112-page report aloud in Giles County Circuit Court at a brief hearing Wednesday morning. When he was finished, Circuit Court Judge Colin Gibb said, "The court is of the opinion that that concludes the matter."

I don't think so, your honor.

The citizens are still riled up. they still say the waste project is a threat to public health and property values because fly ash which will be placed on the site has high levels of heavy metals, arsenic and other toxic materials. In addition, the design of the project is not likely to protect against groundwater contamination, the citizens group keeps trying to tell anyone who will listen. They plan further action to try to stop this project.

By the way the people in CCGC are not the only ones concerned.

The Virginia Tech chapter of the American fisheries society has said that the plan poses an “unacceptable risk to the fishery of the New River.” Fisheries biologist Than Hitt, writing on behalf of the society, also said he worried that there were “no plans for a temporary cover or cap on the fill site during the three years that (fly ash) will be disposed of” at the site.

“The plans for the project seem to assume that there will be no rain, snow or other major weather events like hurricanes, tropical storms or nor’easters for the three year disposal period. This is a recipe for potentially major leachate problems.”

Hitt also said that due to poor quality of the leachate data provided by Appalachian Electric Power, “there is inadequate analysis of the true potential for contamination.”

Ironically, one of the stated purposes of the project is to benefit the county's schools. The partnership is a nonprofit 501(c)(3) organization whose primary exempt purpose is "educational enrichment," according to its tax forms. It claims it will sell Cumberland Park as commercial property (the "beneficial end use") and donate the proceeds of the sale to the Giles County Vocational School.

But the school board says it has nothing to do with the project or the partnership and maintains that there is no arrangement for the funds to go to the school system.

However, the school board has not taken action that it could.

Five members of the partnership's board of directors are supposed to be school board appointees.

The number, however, is ZERO.
The board could right now demand its five seats on the board of directors. It could then put the breaks on the ash site and address public concerns about it.

Alternatively, says the Roanoke Times, the schools can formally split with the partnership. Thank it for whatever services it provided over the years, but clearly inform it that it no longer may claim association with the county's public education mission.

Did I mention that more than a year ago a broad coalition of 27 environmental and public health groups, led by Earthjustice, Clean Air Task Force, and the Environmental Integrity Project, submitted a proposal to EPA detailing ways to protect against pollution from the millions of tons of coal ash disposed annually by U.S. coal-fired power plants. The groups also requested that EPA take immediate action to investigate and abate pollution at coal ash dump sites.
They're getting nowhere just as fast as those 130 environmental groups did back in 2004.

The question is if some folks in some small town somewhere in America succumb needlessly to poison, does anyone notice?

The Oread Daily cares and so should you!

The Concerned Citizens of Giles County had brought a public nuisance lawsuit against the Giles County Partnership for Excellence which owns the land.

We reported to you that on June 18th, the jury decided that the fly ash was not a public nuisance and you heard what lawyers for both sides had to say, but today we spoke to the people actually involved in the case.

"Our jury's decision really did not change the danger that this site poses," says Cunningham.

"We are confident that it is environmentally safe," says Spencer.

Two completely different opinions about the same piece of land.

The debate is over fly ash and its use as the structural fill for a construction project on the site.

The concerned citizens say they understand that all of the permits and regulations have been followed. That's not the problem. Their issue is with the site being located right next to the New River.

"Fly ash is most dangerous when it mixes with water, so what worse location could you possibly choose?" says Cunningham.

The concerned citizens are also upset that the Partnership is not required to monitor the water, but even though they're not required, Spencer says they are doing them four times a year.

So far, no problems.

But the concerned citizens say they have found some areas where people believe fly ash is causing health problems, such as the Town of Pines in Indiana.

"Their water supply is poisoned. It is contaminated," says Cunningham.

But Spencer says that's different because it was a landfill and this is a structural fill.

He also says this isn't the first place in the county they've used fly ash.

"This is a structural fill that we did here in Glen Lyn. We know that it works," says Spencer.

The Concerned Citizens disagree, and although they lost their recent lawsuit, they're not giving up just yet.

"Our lawyers are discussing our next step. We are determined to continue fighting for the health of people in Giles County and communities, other communities that depend on this river," says Cunningham.
Posted by Oread Daily at 4:28 PM