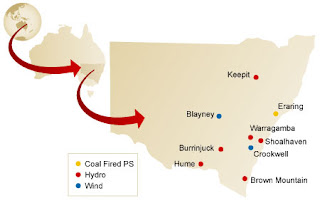 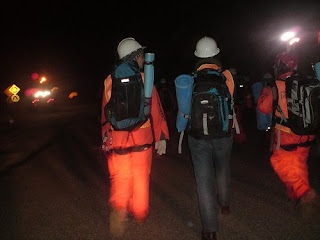 The 27 activists (three of whom are pictured here entering the plant) include an ex-miner from the Hunter, Australia. They have stopped coal supply. Every hour we stop the coal supply, we're preventing 2000 tons of CO2 from being released (Note: the latest bulletin from Greenpeace Australia reports 12 activists are still locked on. Fifteen have been taken into custody. Coal supply is still being stopped).

"We have to stop fuelling climate change when creating electricity," says Greenpeace climate and energy campaigner Simon Roz. "Eraring, an old and inefficient plant, is one of eight coal-fired power stations in New South Wales. These plants are responsible for half the state’s and 13% of Australia’s greenhouse pollution."

Last November Australia's energy industry representatives admitted Australia does have some of the world's dirtiest power stations and is the world's worst per capita greenhouse polluter.

According to the study by the Washington-based Center for Global Development, Australian power plants produce more carbon dioxide emissions per person each year than the United States, and almost five times as much as China.

The Eraring plant in the Hunter Valley, New South Wales has been identified as one of the top 100 greenhouse gas emitters in the world.

During an occupation of a nearby power plant last November Greenpeace energy campaigner John Hepburn said, “We can't just sit back and watch while scientists measure how quickly humans are killing the planet. We should not be opening new coal fired power stations, nor extending the life of old ones, when we need to cut carbon emissions right now by making the switch from coal to cleaner, smarter energy."

"As global warming continues then there is a significant risk that the uptake of carbon by the oceans and terrestrial ecosystems will decline and as a result a greater proportion of each unit of emissions will stay in the atmosphere," he said.

"Now that's bad because it will result in a higher concentration of carbon in the atmosphere and as a result, greater warming."

"Decision makers often rely on data that do not fully account for this information," he said.

Macintosh states the current target of a 60 per cent cut by 2050 is unlikely to be effective.

"So clearly outside of the bounds of what a large number of people are now saying is the trigger for dangerous climate change."

The following is just in from the Australian Broadcasting System.

Environmental group Greenpeace is this morning escalating its campaign against climate change, with almost 30 activists chaining themselves to a coal conveyor at a Lake Macquarie power station.

The action is aimed at preventing coal from feeding generators at the Eraring power station.

Climate and energy campaigner Simon Roz says it is part of an ongoing campaign for a reduction in carbon emissions in the lead up to the release of the Federal Government commissioned Garnaut report into climate change.

"We make no apology at all for the fact that our action is highlighting the urgent need to address greenhouse pollution," he said.

"Coal is responsible for a third of our national emissions and we simply must replace coal with renewable energy if we're to have any hope of averting dangerous climate change."