GUNBOAT DIPLOMACY RETURNS TO LATIN AMERICA WITH THE US FOURTH FLEET 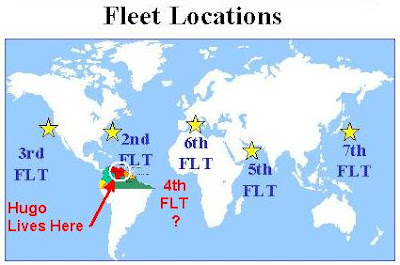 Venezuelan President Hugo Chávez Tuesday joined a growing group of Latin American leaders who view the reactivation of the US Navy Fourth Fleet to patrol Latin American seas as unnecessary and a threat to sovereignty.

Chavez says one of the reasons behind this action is Venezuela's huge oil reserve.

"I do not have any doubt about it. It is a threat. There is no need to make any questions. I am sure you feel it that way too," he told reporters.

He urged the member countries of the Common Market of the South (Mercosur) to ask the US administration for an explanation on the deployment of the fleet.

The Fourth Fleet was created during the Second World War to combat German U-boats targeting merchant shipping lines in the South Atlantic.

However, I haven't heard any recent reports on those U-boats bothering anyone lately.

The US Department of Defense says the measure is aimed at building confidence and trust in the region by focusing on common threats.
Yeah, right.

Lieutenant commander Pat Paterson, who is the liaison between the US, Andean and Southern Cone navies disputes Chavez's contention that the fleet is a threat to his nation. However, Paterson did concede that "there is concern that President Hugo Chávez may revert the great progress his country has made toward democratic principles and institutions [...] and may threaten his peaceful neighbors or destabilize the region."

The Fleet’s rebirth, in truth, it seems to me implies a return to gun boat diplomacy and represents a new call to arms.

Some guy named Raymond Zbylut out in Omaha, Nebraska (always a hotbed of commie agitation), I think, expressed what would be the feelings of many regular old A-mer-iii-cans (if they happened to hear somewhere about this reactivation of imperial might) at Guampdn.com's Voice of the People (don't ask me why he wrote this at a Guam cite):

"The U.S. Navy, under orders from the Bush administration, has reactivated its Fourth Fleet, which had been decommissioned for 43 years. I believe its mission is to sow terror and enforce a deadly 21st century "gun-boat diplomacy," starting in South America, now that the price of crude oil has gone up considerably. I have written to U.S. senators and congressional leaders regarding the issue."

The elite power circles in Washington, D.C., have desired to control Venezuela's oil reserves for years, as it is the second largest deposit on earth. With China and India entering a more modern stage of industrial development, the United States -- desperate to retain its global hegemony and enforce its ideals worldwide -- wants to maintain a stranglehold on the world's oil supply for this purpose."

The U.S. military industry and oil interests seem to be ready for yet another military invasion of a peaceful nation, to deny the Venezuelan people of their oil and eventually their lives should they refuse to kowtow to a massive invasion force. It was announced on April 24, 2008 that Rear Adm. Joseph D. Kernan, current commander of the Naval Special Warfare Command (SEALs) and the Special Operations component of the Navy, will assume the command of the re-established U.S. Fourth Fleet and U.S. Naval Forces Southern Command."

The head of the U.S. Southern Command, Adm. James Stavrides, said the U.S. needs to work harder in "the market of ideas to win the hearts and minds" of the region's people. Where have we heard that line before? When we slaughtered millions to win their hearts and minds of people in the Philippines, Vietnam, El Salvador, Nicaragua, Grenada and Iraq."

Soon we will hear catch phrases of how the people of Venezuela, Ecuador, Peru, Argentina are being enslaved by dictators. We will hear the rhetoric that the people are desperately hoping for Uncle Sam to free them and bring them U.S.-style democracy."

I'm taking a stand now. My children and grandchildren will not learn to hate our neighbors to the south, nor kill fellow human beings so that the elite can steal the property of Venezuela."

I ask all peoples of the world to rally publicly with me in this condemnation of the re-activation of the Fourth Fleet, and this prelude to yet another war of aggression against our brothers and sisters in Venezuela, Ecuador and the entire southern hemisphere."

It is our children and grandchildren who will once again be asked to die for this murderous aggression that is bound to occur. Our time to take a stand is now, not later."

I don't think he's crazy. When I heard the news the other day about gas prices maybe hitting $7 or $8 a gallon in the none to distant future, I couldn't help but think the old idea of seizing the oil fields couldn't be far away either.

Now the Bushies wouldn't want to mess with their friends in Saudi Arabia, but hey, what better target then Venezuela.

Can't you just see some domestic turmoil popping up there, someone ousting Chavez, and the US in the interest of "stabalization and human rights" sending some folks in and putting some big boats just off shore?

Summing it all up the Council on Hemispheric Affairs writes:

"Washington’s Fourth Fleet initiative is mainly not a welcomed development in U.S. Latin American policy relations. While raising apprehensions of covert U.S. military and intelligence ranks to the armed forces of hemispheric leftist regimes, as voiced by Correa of Ecuador in April 2008, the Fleet’s presence could also lead to the diminishment of local funding for broad social and humanitarian needs as Latin America’s defense establishments will seek to bolster their budgets in response to the growing threat posed by neighboring militaries which are building up their armed forces. The return of gun boat diplomacy is only a confirmation to Latin America that the U.S. is unaware of some of the new realities as the region seeks out its destiny without the White House at its helm."

The following is from the Missionary International Service News Agency (MISNA). I know it's an odd name for an OD source, but MISNA covers lots of stuff from the ground level. I find it a good source of information.

“What we need to ask is what need is there for military deployments in areas where there are neither nuclear weapons nor wars among states? In the measure in which a similar decision implies hegemonic pretensions to use military force or to threaten its use against any Latin American country, one cannot but reject it categorically”. So said the president of the National Cuban Assembly, Ricardo Alarcón, concerning Washington’s announcement that it shall imminently reactivate, in the Latin American area, the IV fleet, which was assembled in 1943 and dissolved in 1950; the move has raised concerns in the region and Alarcón has discussed the matter during his meeting with Brazilian president Luiz Ignacio Lula da Silva in Brasilia. “We want explanations from the USA, because we live in an entirely peaceful region” said Lula, who had already expressed his reservations at the Mercosur summit in Argentina; Venezuela’s president Hugo Chávez also opposed the IV Fleet redeployment describing it as “a threat to peace and natural resources in the region”. Fidel Castro was the first to voice concerns over the IV Fleet last May. He said that the decision betrays new “interventionist goals” in Latin America, especially as far as Venezuela, Ecuador and Bolivia are concerned.[
Posted by Oread Daily at 4:15 PM