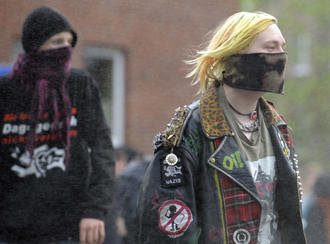 Germans leftist and anarchists took to the streets across Germany for May Day demonstrations aimed at confronting right wingers and racists.

Anti-fascists fought with police in Hamburg and Nuremberg where members and supporters of the neo-fascist National Democratic Party attempted anti-immigrant marches.

Charlotte Knobloch, the head of the Central Council of Jews in Germany, said Wednesday in Munich, the right wing march in Nuremberg is a sign of civic failure. Two members of the party's anti-foreigner initiative were elected recently elected to the Nuremberg City Council.

The developments reveal a "broadly distributed right-wing extremist atmosphere in an entire milieu that is obviously coursing through Nuremberg," Nobloch said.

"Even 75 years after the National Socialist seizure of power, we are forced to say it again: Don't let these seeds take root," said Knobloch, who has argued that the National Democrats should be banned as an anti-democratic party.

In the Thuringian city of Erfurt, a march of 1,300 right-wingers was blocked by a similar number of leftists. Police made 60 arrests after they were attacked and cars were damaged.

In Leipzig in the states Saxony, following a rock concert against right-wing extremism Monday night, 1,000 people assembled on a square and threw missiles, injuring 18 police officers. Police made 25 arrests.

The article below is taken from Earth Times.

Violence in Germany as rightists hold May Day marches

Leftist radicals fought Thursday in two German cities with riot police who were thwarting attempts to disrupt May Day parades by the far-right National Democratic Party (NPD). In Hamburg, five cars were set on fire and volleys of stones shattered many windows. Police used water jets mounted on heavy trucks to open up a route for an estimated 1,100 far-rightists. Leftist leaders said they mustered 10,000 protesters at the scene.

The anti-immigrant NPD, which has sought to present itself as a voice of the poor, staged labour-day parades through an old-time working-class district of Hamburg and through Nuremberg, the city adopted by dictator Adolf Hitler as the home of his Nazi Party.

The NPD, believed to have 7,000 card-carrying members, has seats in two of Germany's 16 state parliaments, but none at federal level. Attempts to proscribe the NPD because of its alleged pro-Nazi views have never succeeded.

Thousands of police were sent to the two cities to prevent clashes between the NPD and the "Black Block," a loose movement of several thousand German anarchists who last June led violent demonstrations against the Group of Eight (G8) summit in Heiligendamm, Germany.

In both cities Saturday, the NPD marched between cordons of riot police ordered to enforce the NPD's right of free assembly. Anti-NPD protesters far outnumbered boot-wearing rightists in both cities.

Both NPD parades ended with the political enemies getting only a few chances to brawl, but dozens were injured in the mayhem.

Police officers bore the brunt of the attacks in Hamburg, scene of the day's worst rioting, as they hemmed in angry NPD youths and chased stone-throwing leftists who tried to ambush the marchers from nearby streets.

The Hamburg parade started hours late, after police had to clear roads of sit-in protests and fire brigades had to extinguish bonfires and suppress smoke from burning piles of tyres lit by the leftists.

In Nuremberg, 1,500 NPD supporters paraded on empty streets but were pelted with eggs and bottles during a final rally, as some of nearly 10,000 anti-NPD demonstrators managed to get within striking distance after scuffles with police lines. Four police were injured.

At the same time, mainstream labour and religious groups held peaceful rallies at more distant locations in the two cities to denounce the NPD. German Social Democrats and labour leaders called Saturday for renewed efforts to outlaw the far-right party.

Bavaria state's premier, Guenther Beckstein, who comes from Nuremberg, told a peaceful anti-NPD rally far from the clashes that his government would use undercover agents, court challenges and youth education programmes to undercut the NPD wherever it could.

Nuremberg has created a guided tour of Nazi crimes in the ruins of a former Nazi Party park on the city fringe.

Berlin, the capital city, where activists associated with the Black Block have rioted on previous May Days, remained largely calm. The "revolutionary" group held a peaceful march against "oppression and imperialism."
Posted by Oread Daily at 3:06 PM

More info on the past week in Germany here: http://drinksoakedtrotsforwar.com/2008/05/02/this-week-in-germany/