MASSACRE IN SOMALIA - SOMEONE MUST BE HELD ACCOUNTABLE 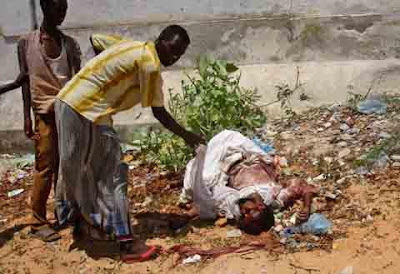 Amnesty International on Friday called on Ethiopia to investigate allegations that its troops killed at least 21 people, including 11 unarmed civilians, in a mosque in the Somali capital.

The rights group cited several sources which said Ethiopian troops carried out the killings on April 19. The Ethiopian government has rejected the claims.

At least 10 other people were killed by Ethiopian forces near the Al-Hidaya mosque in northern Mogadishu, bringing the death toll to 31, an Amnesty statement said.

"Deliberately killing civilians is a war crime," said Amnesty. "We call on the Ethiopian government to ensure an independent investigation is carried out into the raid on the mosque and the subsequent treatment of those detained by its forces."

"Seven of the 21 killed at the mosque were reported to have had their throats cut, a form of illegal execution practised by Ethiopian troops in Somalia," Amnesty said.

The report is based on several cross-checked, independent sources such as family members of victims, testimonies gathered at the location, including individuals present in the mosque while the killings took place, and local Amnesty International contacts.

"I personally do not believe that someone praying at a mosque was pulled out and killed, but I want to make clear that the [Transitional] Federal Government is investigating," the Interior Minister said in Mogadishu.

President Abdullahi Yusuf told the VOA Somali Service, "What is being said [about the mosque massacre] is completely untrue..The [Ethiopian and Somali] troops will defend themselves when attacked...but there is no incident where soldiers entered a mosque and slaughtered the people inside."

A witness named Omar disagreed. He told Garowe Online that he was inside al Hidaya Mosque in Huriwa district when Ethiopian soldiers stormed inside on Sunday.

"The first person they [Ethiopian soldiers] killed was Sheikh Said Yahya, the Imam [prayer leader]," Omar said, adding that the late Imam opened the mosque door after the soldiers knocked.

"I stood above 11 dead bodies, some with their throat slit and others shot to death," said the witness describing the gruesome scene. Of the 11 dead victims, nine were regular congregants at the mosque and reportedly were part of the Tabliiq wing of Sunni Islam.

Witness Sheikh Mohamed Muse said the Ethiopian troops also arrested 21 boys who had taken refuge in the mosque during the fighting. “What they did was a gross humanitarian violation. They shot innocent clerics inside the house of Allah, I’m sure God will punish them,” Muse said.

Amnesty International also called on the Ethiopian military to release some 41 children held after the mosque massacre.

"The safety and welfare of the children, some as young as nine years old, must be paramount for all parties," said Amnesty International.

The attack on the Al Hidya mosque occurred during two days of fighting between the Ethiopian military and TFG against armed groups opposed to them, in which the Elman Human Rights Organisation documented 81 deaths and more than one hundred injured. It is not known how many of these were civilians. The attack also followed increasing attacks by armed groups opposed to the TFG on towns in southern and central Somalia, including an attack on Beledweyne by Al-Shabab militia on 13 April, where local residents reported that militia members killed four teachers. An Al-Shabab leader has claimed the teachers were shot in crossfire.

Also, last week the United Nations independent human rights expert for Somalia denounced the killing of civilians amid the fresh escalation of fighting in the war-stricken east African country. Ghanim Alnajjar, the UN special rapporteur on human rights in Somalia, called for an immediate ceasefire between Ethiopian-backed government troops and Islamist insurgents. "The use of heavy weaponry in areas where civilians are concentrated left reportedly 81 civilians dead and more than 100 wounded," he said in a statement.

And Muslim leaders yesterday accused the African Union and the UN of failing to take action as innocent citizens are being killed in the Horn of Africa nation.

In a signed statement, the officials, who had called a press conference at Nairobi's Jamia Mosque, accused the Ethiopian army of abusing the rights of Somali Muslims by bombing and storming mosques.

The attack on the Mosque was not the only action specifically denounced at the press conference.
"The soldiers also stormed a hospital and killed patients before looting drugs and other medical equipment. They further ambushed a madrassa and abducted 40 children." said Abdi.

The leaders demanded the immediate withdrawal of the Ethiopian troops from Somalia to give room for dialogue between the warring communities and political forces.

He said the Somali people should be given an opportunity to determine how best they wanted to govern themselves.

Abdi said the "killers" should be arrested and charged in The Hague.

The following is from MISNA.

“We have not had a chance to speak to those seized at the al Hidaya mosque, but we are conducting investigations to reconstruct the entire episode”, said to MISNA Zahir Ali of the ‘Sean Devereux’ aid agency a few days from the massacre in the northern Mogadishu mosque, in which some twenty people were killed and 41 students – many children – were abducted and released after six days of questioning at the headquarters of Ethiopian troops deployed in the country in support of the Somali transitional federal government (TFG). “What occurred is unclear, given that the government excludes that the Ethiopian troops entered the mosque and killed the twenty faithful and Imam. What we are certain of is the discovery of the lifeless bodies and eyewitnesses speak of a cold blood execution”, added Ali. According to the source, “the children were detained because believed to be young militants of anti-government groups, which used the mosque as a recruiting centre, and released after the military failed to link them to any criminal activities”. According to the local press, at least 10 members of the Alliance for the Re-Liberation of Somalia, which groups different exiled opposition movements, have arrived in the southern Middle Shabelle region for consultations with local groups ahead of the first meeting on May 10 in Djibouti between the transitional government of Nur Hassan Hussein Adde and Asmara-based opposition. The appointment is part of reconciliation efforts launched by the prime minister and supported by the UN secretary general’s special representative, Ahmedou Ould-Abdallah.
Posted by Oread Daily at 2:38 PM