MAY DAY: A CALL FROM THE WORKER-COMMUNIST PARTY OF IRAN 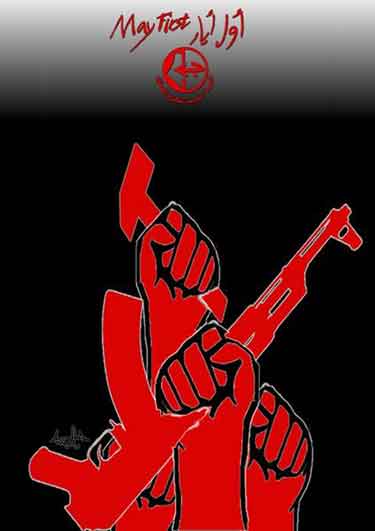 The following is from the web page of Maryam Namazie. Maryam Namazie is a rights activist, commentator and broadcaster on Iran, the Middle East, women's rights, cultural relativism, secularism, Humanism, religion, Islam and political Islam. She is the Spokesperson of the Council of Ex-Muslims of Britain; National Secular Society's 2005 Secularist of the Year award winner and an NSS Honorary Associate; spokesperson of Equal Rights Now - Organisation against Women's Discrimination in Iran; Central Committee member of the Worker-communist Party of Iran and co-editor of WPI Briefing. She is also involved in the Third Camp against US militarism and Islamic terrorism among other things.

May Day is the hope of the world!

This year’s international workers’ day is arriving at a time when there are signs of a global financial and economic crisis. The World Bank warns governments about the threat of food riots. And the prospect of crisis and catastrophe makes a bleak world - already reeling from the shock of the New World Order and the global war of terrorists - even bleaker.

The hope of changing these conditions lies in the struggle of a class that makes up the majority of the world’s population. This inverted world has been founded upon the wage slavery of this class, and for the preservation of this slavery. May Day, the day of international solidarity and struggle of the working class, is at the same time the day of unity of repressed humanity to change this inverted world. We call on the people of the world to stand up on May Day to capitalism and the catastrophes it causes, to starvation and war, terrorism, ignorance and domination of religion, to deprivation and inequality and in support of freedom, equality and human identity.

In Iran the working class faces the same conditions as May Day approaches. The difference is that in Iran the Islamic regime of the bourgeoisie is facing a deep economic, political and cultural crisis and there is an ongoing powerful anti-regime and revolutionary movement. The slogans “We Don’t Want Islamic Regime” and “You’ve Been Wasting our Time since 1979” which the youths in Tehran chanted recently, clearly depict the essence of the political situation in Iran. The working class is the backbone of this revolutionary movement. This is not only because of the numerous strikes and protests by workers, which are getting even more radical each day, as in the case of Kian Tyre workers, which ended up in barricades and direct clashes with the security forces, but also because the slogans and demands of the working class such as “Freedom, Equality, Human Identity,” “Socialism or Barbarism,” “End Sexual Apartheid,” “Abolish the Death Penalty,” “Woman’s Liberation is Society’s Liberation,” and “Human Life is Our Certain Right”, are echoed in mass demonstrations of teachers, women and youths on different occasions. Public executions, the attacks on millions of women for not observing Islamic veiling, punishing gays by throwing them down from heights, stoning to death, amputating hands and feet as a form of punishment, brutal attacks on leftist student activists, jailing workers’, teachers’ and women’s rights activists, flogging worker leaders for celebrating May Day - these are all a reflection of the Islamic Republic’s efforts to stop this unstoppable movement. May Day in Iran is in the frontline of this massive social confrontation, and it terrifies the Islamic regime more than anything else. The government’s “Workers’ House” has not even dared to organise the state-sponsored rally for this May Day in Tehran because in the past years they lost control of these masquerades, and the puppetry turned into workers’ march chanting socialist slogans.

This year’s May Day should be celebrated stronger and in greater numbers than ever before. Great masses of workers and all those yearning for freedom should be mobilised for May Day. In recent years, the workers’ movement in Iran has been supported internationally more then ever before, acknowledged as a political force that can change society. These are strong foundations upon which to build a powerful May Day. This May Day in Iran should attract massive sections with the call for “Freedom, Equality, Human Identity” and should be made the hope of the working people of the world.

WPI calls upon all workers, students, women and youths to mobilise for a magnificent and powerful May Day.