SANTORUM'S FILMAKING JIHAD AGAINST THE LEFT 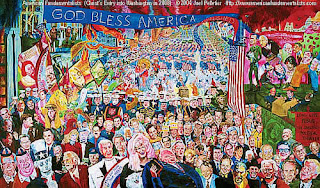 The following piece was written by our friend Bill Berkowitz. It appeared on Talk to Action. "Talk To Action is an online publication, and a forum for discussion, that is focused with unparalleled intensity on the rise of the Christian right as a social and political force - and on what those who are opposed to that movement can do to counter it."

Santorum's Filmmaking Jihad Against the Left
By Bill Berkowitz

According to recent published reports, former Pennsylvania Republican Senator Rick Santorum - thoroughly defeated in November by Bob Casey, Jr. -- is planning two documentary film projects to "tell the other side of the story." What story is he talking about? According to The Morning Call Online, the projects are aimed at "counter[ing] what [Santorum] characterized as the stream of left-wing documentaries coming from Hollywood and independent filmmakers."
The newspaper reported that Santorum first project "would explore the relationship between radical Islam and the radical leftists in various countries around the world, including Latin America. It would be about an hour in length. The second would be a longer, broader documentary that he said would aim to 'change the culture of America.' He declined to go into specifics about the proposal."

Santorum, who has also signed on with Fox News as a regular contributor, also announced in an e-mail to supporters on Thursday, April 12, that his political action committee will soon launch a new Web site with "thought-provoking and sometimes controversial video," the Associated Press reported.

According to AP, "the videos will focus on `our nation's enemies and the threats they pose to us,' said Santorum....The site will also inform viewers of what presidential and congressional candidates he supports, he said.

Now ensconced as a Senior Fellow at the Washington, D.C.-based Ethics and Public Policy Center, Santorum spent the final weeks on his campaign delivering a speech titled `Gathering Storm of the 21st Century." "In it," AP reported, "he described alleged terror plots and said the U.S. must pay attention to escalating threats from countries such as Iran, Venezuela and North Korea."

In the e-mail Santorum wrote:

We cannot underestimate the threats we face from those who wish to do us harm. Hugo Chavez in Venezuela, Mahmoud Ahmadinejad in Iran, and North Korea's Kim Jong-il are committed to destroying the West and the freedoms we hold dear. Many would rather ignore these obvious realities, but I will not. And now that I am out of elected office, I have found that there is more than one road that I can walk down in order to raise awareness about these issues.

Santorum also "criticized the Democratic-controlled Senate for passing legislation that he said would force retreat from Iraq without regard for conditions on the ground," AP reported. "I will not sit back quietly as weak senators continue to take positions simply to satisfy the liberal left."
Americas-Foundation.org "will also be the place where you can stay informed about what I am up to on all fronts," Santorum wrote. "You were a steadfast friend and supporter during my campaigns and I hope you'll stay connected to America's Foundation in the months and years ahead. I promise that this will be the place where you'll see serious and stimulating video about the challenges confronting our country, read blog posts from me on politics of the day and find interesting `must read' articles."
Posted by Oread Daily at 11:40 AM