MINING OPERATION SHUT DOWN BY PROTESTS IN AUSTRALIA 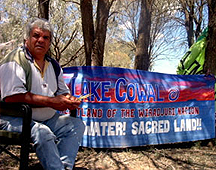 A report on IndyBay says Canadian mining giant Barrick Gold's Australian mining operation in Lake Cowal was shut down Saturday by protesters. There have since been numerous arrests.

In the lead up to Barrick's annual shareholder meeting, over 80 people occupied the mine site to bring attention to land justice and water equity issues surrounding the open-pit mine, which has just passed its first year of full operation.

This precious wetland is threatened by a cyanide leaching gold mine project. The project includes a 1 kilometre wide open pit on the edge of the Lake.

Lake Cowal / The Bland is a very important sacred region for the Aboriginal Traditional Owners and is often called "the Heartland of the Wiradjuri Nation". When explorers first came to Lake Cowal they recorded tribal Aboriginals who used the area as a campsite and sacred site. There are thousands upon thousands of artefact and relics at the Lake Cowal site that are testimony to this useage. Barrick Gold have not properly consulted with many Aboriginal traditional owners from the region, many of whom have declared their opposition to the Lake Cowal gold mine project. The gold mine at Lake Cowal has already destroyed parts of this Aboriginal Sacred Site including Aboriginal artefacts, scar trees and other cultural objects.

Australian Student Environment Network’s national convenor, Nicola Ison says, “In the lead up to Barrick Gold’s AGM on 2nd May, Wiradjuri and their supporters are presenting an eviction notice to the gold mining giant.”

“Barrick is transporting over 6000 tonnes of cyanide annually from Gladstone, Queensland to Lake Cowal, New South Wales, creating risk of spill and lethal contamination of waterways along the 1600 km transport route” says Ison.

Friends of the Earth campaigner, Holly Creenaune says, “While Australian communities are in the grip of devastating drought Barrick draws up to 17 million litres of fresh water each day at Lake Cowal. In the last 2 years, the water table has dropped 35 m due to Barrick’s mine.”

The following is from the Lake Cowal Campaign.

Fourteen protestors have been arrested at a demonstration in support of Wiradjuri Traditional Owners who want the Lake Cowal Gold Mine stopped.

Around 100 Aboriginal and environmental supporters demonstrated at the Lake Cowal Gold mine, 47 kms from West Wyalong over Easter to protest against the desecration of traditional Wiradjuri lands and environmental damage caused by gold mining.

Some of the demonstrators locked themselves onto pieces of machinery, shutting down mine operations, while others occupied the mine's offices.

West Wyalong police charged the protestors with entering 'inclosed land' under the obscure Inclosed Land Act 1901. The protestors were released on bail on the condition that they did not come within 10 kilometres of the mine.

Wiradjuri Traditional Owners have been holding convergences at Lake Cowal for a number of years as part of their campaign to raise awareness about the destruction of their ancient cultural heritage and their demands for the mine to be closed.

During yesterday's protest, a Barrick Gold mine manager refused to accept an eviction notice from Traditional Owner, Neville "Chappy" Williams. Mine
Manager, Bill Shallvey, rudely refused to take the notice, the fourth issued to Barrick since 2002, shouting that Williams and his supporters were "misleading people".

"Our Aboriginal People are being denied access to our sacred ground. Protestors from around the world are here to support our claim for access to our ancient lands. Australian Aboriginal Peoples have the oldest continuing living culture in the world. We Wiradjuri People are also being denied the right of spiritual and religious freedom under s.116 of the Australian Constitution," Mr Williams said.

"Barrick is desecrating our sacred site and Dreaming Place and denying us access to our traditional lands. The company has moved or destroyed more than 10 000 artefacts including marked trees, damaging the integrity of the area forever.

"The company did a deal with five unauthorised Wiradjuri, who signed away the ancient inheritance of over 30 000 people of the Wiradjuri Nation. After signing the secret agreement with Barrick they discontinued their Native Title Claim over the area. Our Mooka and Kalara united families' claim is still active in the Federal Court and is proceeding towards determination. Our claim group is more than several thousand people who have bloodline back to Country over thousands and thousands of years.

"Despite Barrick's assertion that we are misleading people, what we are doing is our ancient cultural duty to protect our sacred Country for the generations to come. We are also raising awareness of the dangers of cyanide leach gold mining and the mine's excessive use of precious water in the middle of the worst drought on record. The fullest dams, in the very parched countryside between Condobolin and the mine, are the toxic tailings ponds west of the open cut pit, which extends into the lakebed.

"I am proud of the courageous and brave protestors who entered the mine, occupied its office and locked onto the conveyor belt, shutting down operations. They had my authority to enter our traditional lands."

The Easter Sunday protest was the climax of the weekend of actions that included a Saturday morning demonstration in Condobolin outside the offices of the Wiradjuri Condobolin Corporation funded by Barrick under the secret agreement.

Attended by environmentalists from Bolivia, Canada, the United States, England, France, Germany, Iraq, Papua New Guinea and Switzerland as well as most Australian states, the campaign to protect Lake Cowal continues to gain international recognition as momentum grows in the fight to stop the desecration of Indigenous lands and the environmental destruction resulting from gold mining on all continents.

Activists are working towards international solidarity against Barrick on 2 May 2007, the day of its Annual General Meeting.