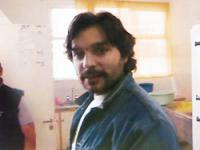 A nationwide strike called by teachers is underway today in Argentina. The strike was called to protest the death of a chemistry teacher during a protest last week. Carlos Fuentealba (see accompanying picture) was killed by a Neuquén police officer who fired a tear gas canister at him at almost point-blank range during a teachers’ protest.

"Those responsible for these criminal acts must be punished," said Hugo Yasky of the CTA, whose union is one of two main columns in the larger General Labor Confederation in Argentina.

As of 9am, hospitals are only treating emergency cases. There won’t be classes at at public schools and universities today.

In addition, Argentine workers blocked highways throughout the country to demand that a regional governor -- and potential presidential candidate -- resign following the killing of the teacher last week.

The CTERA teachers’ union lead a demonstration of several thousand that marched from the Obelisk in the capital to the Neuquén Province House, located on Diagonal Norte corner Maipú The march has the support of political, social and human rights organizations.

Marcelo Gugliardo, chairman of the union said that the tragedy demands that “minimally officials from the areas of Security and Education must go”, and called on provincial legislators to “impeach” Neuquén governor Jorge Sobisch.

``Nobody is paying attention to health and education,'' said Marta Auger, 77, a social worker with a photo of Fuentealba pinned to her shirt. ``People are forced to live in the slums because rents are so expensive.''

Buenos Aires City declared a day of mourning and Buenos Aires province ordered flags in schools to fly at half-mast on Monday for the killing Fuentealba.

For further information scroll on down to Friday's OD news.

The following is from Reuters Alert.

Argentine school teachers went on a one-day nationwide strike on Monday after a high school chemistry teacher was killed by police last week during a protest over pay in the southern province of Neuquen.

In the capital, Buenos Aires, workers at banks, hospitals, government offices, and public transportation joined the strike for one hour on Monday afternoon.

Carlos Fuentealba, a 41-year-old teacher, died on Thursday, a day after he was hit in the head by a tear gas cartridge when police broke up a teachers' protest and road block in Neuquen.

Protesters blame Neuquen Gov. Jorge Sobisch, who ordered police to break up the road blocks and marches. The death of the teacher has further complicated a bid by Sobisch to run for president in October against popular President Nestor Kirchner.

Recent polls showed Sobisch with support in the single digits.

"Professor Carlos Fuentealba's assassin has a name. His name is Sobisch, and he must pay. He must go, he must answer for his crimes," Hugo Yasky, president of the national teachers union, said at a rally of striking teachers in Buenos Aires.

The protest in Neuquen last week came after many provinces said they do not have enough money to give teachers raises decreed by the central government.

Base salaries for Argentine teachers were raised by 24 percent in a February government decree. Inflation last year was close to 10 percent and the base teachers wage was raised to some $334 from $270 a month, which was below the poverty level for a four-person family.

"They shot Carlos, but they shot not only him, they shot my entire family, and they also shot all those things he stood for," his widow, Sandra Rodriguez, told reporters.
Posted by Oread Daily at 2:43 PM

Thank you for posting about this important strike,