WORKERS TAKE TO THE STREETS TO SAVE JOBS 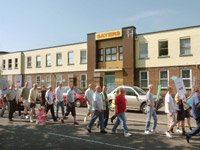 Renowed Liverpool bakers Sayers could shed half its staff only months after it signed a £2m deal to become a Capital of Culture partner and the staff isn't one bit pleased. Angry staff are now demanding to know why the company spent cash that could have saved their jobs on a deal with Liverpool Culture Company.

You may wonder what prompted me to cover this story. I may wonder, too. The truth is the world is overloaded with stories like this and each one is a tragedy for somebody.

The following is from icLiverpool.

Workers in protest march over threat to Sayers

DOZENS of protesters took to the streets in a last-ditch attempt to save almost 200 jobs at Liverpool bakers Sayers.

The company has said it wants to shed half its staff to save costs and will move some of the workload to its other bases.

Workers and their families marched through Norris Green, where the site is based, insisting they could compete with other UK factories.

They have called for the company to invest in the site to help improve efficiency.

Bob Wareing, Labour MP for West Derby, who took part in the demonstration, said: "About 75 to 80 workers and their families turned up to march against this decision.

"The workers are going to fight on in the hope of reversing the decision. Whether this will happen or not, I am not sure at this juncture. But I will certainly keep putting pressure on the Government to try to save these people's jobs."

Sayers also closed down its pension fund, a move which has angered the workforce.

The announcement was made in April, just months after the company signed a £2m deal to become a Capital of Culture partner.

The main union at the site, the Bakers, Food and Allied Workers Union (BFAWU), organised Saturday's march in a bid to show the strength of feeling among employees and to try to get the company to change its mind about the job cuts.

Parent company Lyndale Bakeries wants to axe 183 jobs at the Lorenzo Drive factory in Norris Green, and a 90-day consultation is under way.

Mr Wareing said it was the duty of government to step in to such disputes because of their wider-ranging effects on the economy.

He added: "All the Government is offering is to get Job Centre Plus to discuss the futures of some of the workers who could be made redundant. I don't think this is satisfactory.

"The Government won't interfere because this is a commercial decision. But it is also a social decision, because it is the taxpayers who end up footing the bill.

"When people are made redundant, they have to go on benefits and stop paying taxes.

"I think wherever there are redundancies, whether it is at Sayers, Peugeot or Vauxhall, the Government should step in and undertake a social audit."

It is understood that much of the Liverpool operation will now be carried out from Bolton. Managers told employees the company was suffering from the impact of Kwik Save's demise.

Kwik Save's owners announced plans for the disposal and closure of the business at the end of February. Half of the output from the Lorenzo Drive bakery went into Kwik Save stores.
Posted by Oread Daily at 11:37 AM