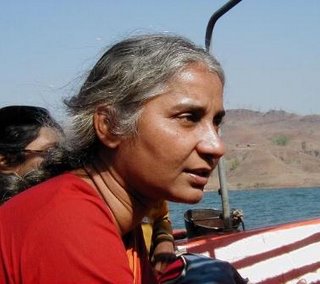 Police today arrested a top environmentalist, Medha Patkar, and scores of her supporters in India as they protested against their government's failure to rehabilitate people displaced by a controversial dam.

Criticising the government for not taking adequate steps to rehabilitate the displaced people, the activists demanding to meet Gandhi gathered in front of her residence and shouted slogans.

Medha Patkar, 52, has led a 20-year campaign to protect hundreds of thousands of poor farmers whose homes and fields have been submerged or will be threatened once work to raise the height of the Sardar Sarovar Dam in western India is complete.

You probably have not heard of Patkar, but she is well known and loved in her part of the world.

Medha Patkar, founder of the Narmada Bachao Andolan and the National Alliance of People's Movements, was born on 1 December 1954 in Bombay. Her father fought in India's independence movement and later was a trade unionist. Her mother works in a women's organisation named Swadhar. After earning an M.A. in Social Work from the Tata Institute of Social Sciences, she worked with voluntary organizations in Bombay slums for 5 years as well as tribal districts of North-East Gujarat for 2 years. She left her position on the faculty of Tata Institute of Social Sciences as well as her unfinished Ph.D. when she became immersed in the tribal and peasant communities in Maharashtra, Madhya Pradesh and Gujarat eventually organized as the Narmada Bachao Andolan. The Narmada Bachao Andolan began as a fight for information about the Narmada Valley Development Projects and continued as a fight for just rehabilitation for the lakhs of people to be ousted by the Sardar Sarovar Dam and other large dams along the Narmada river. Eventually when it became clear that the magnitude of the project precluded accurate assessment of damages and losses, and that rehabilitation was impossible, the movement challenged the very basis of the project and questioned its claim to "development."

Among India's most dynamic activists, Medha tai or Medha didi, as she is called by schoolchildren and police alike, knows the Narmada Valley hamlet by hamlet. Veteran of several fasts, monsoon satyagrahas on the banks of the rising Narmada, her uncompromising insistence on the right of people to life and livelihood has compelled the post-Independence generation in India as well as around the world to revisit the basic questions of natural resources, human rights, environment, and development. She had been beaten by police and jailed on numerous occasions. Yet, she has won over police and even government officers through her simple faith in justice and comprehensive analysis of the facts. At a recent occupation by the Narmada Bachao Andolan of the Ministry of Water Resources in Delhi, a police officer was heard saying on his mobile phone, "But this is not a law and order problem."

Linking the Narmada Bachao Andolan with hundreds of peasant, tribal, dalit, women and labour movements throught India, Medha Patkar is a Convener of the National Alliance of People's Movements - a non-electoral, secular political alliance opposed to globalisation-liberalisation based economic policy and for alternative development paradigm and plans. She has served as a Commissioner to the World Commission on Dams, the first independent global Commission constituted to enquire on the water, power and alternative issues, related to dams, across the world.

Taking up a two-pronged approach of sangharsh (struggle) and nirman (constructive work), Medha tai has worked with villagers and community groups to develop alternatives in energy, water harvesting, and education for tribal children. The Reva Jeevanshala, using both state and local syllabus taught by local teachers in the local language, is a system of 9 residential schools and 4 day-schools in the tribal villages of Maharashtra, Madhya Pradesh, and Gujarat.

The following is from Terra Daily.

India's top environmental activist Medha Patkar and dozens of her supporters were arrested Monday during a protest to demand rehabilitation for a controversial dam in western India.

Patkar and around a 100 supporters were on a sit-in protest outside the official residence here of ruling Congress party chief Sonia Gandhi.

Earlier this year, police removed the outspoken activist from a city pavement and moved her to hospital after her health started to fail during a protest fast.

Police on Monday said the activists had no permission to stage a protest in the high-security zone.

Patkar has waged a two-decade fight against the Narmada Valley dam project that advocates say will provide water and hydro-electricity to areas in desperate need.

But activists say about 35,000 people displaced by the project have not been resettled and given cultivable land.

Last month, the Supreme Court gave the go-ahead for continued construction of the dam to raise its height, a move that was bitterly opposed by Patkar and her supporters.

The court also urged the prime minister to ensure people affected by the project were adequately compensated.
Posted by Oread Daily at 12:51 PM