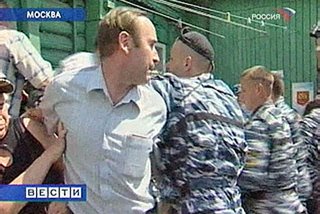 Residents of Butovo, 5 km outside the Moscow's ring road, set up a tent camp Tuesday, and several dozen people intend to keep a vigil there day and night, resisting forcible attempts by the authorities, bulldozers, and riot police to remove them.

Local authorities are trying to evict the residents from their houses, which they plan to raze to make way for high-rise apartment blocks. But promises of compensation and new apartments have been rejected, and residents say they were notified of the plan too late, and that the new housing on offer cannot compensate for the houses and land plots currently in their possession.

The evictees are determined to fight to the end. “This event has caused a lot of reverberations. We can even file a suit with the Hague Court,” one of the activists said, adding that there are only a few dilapidated houses in the village. All others are in good condition and people do not understand why they have to be demolished.

A convoy of seven trucks and a bulldozer arrived at the scene on Wednesday morning. They left 20 minutes later.

The following article is from the Moscow Times.

A ramshackle plywood house on a plot worth hundreds of thousands of dollars on the edge of Moscow is at the center of a fierce battle that is pitting its residents and several federal officials against the seemingly omnipotent Moscow government.

The outcome promises to show how far and for how long politicians are ready to support a real grassroots protest. The case could also help raise the status of the Public Chamber as a defender of public interests.

"This is the barbaric persecution of us here. My mom had to be treated by doctors and is now resting at the neighbors' after two sleepless nights," Mikhail Prokofyev, a 19-year-old student, said Tuesday. The frail house he shares with his mother in the village of Butovo, located some five kilometers south of the Moscow Ring Road, barely escaped being razed by authorities a day earlier.

Dozens of villagers whose houses were targeted for demolition fought off riot police officers and court marshals who tried to clear the way for bulldozers Monday. Television footage showed police clubbing and beating men and women, shocking viewers across the country.

Lawyer Anatoly Kucherena and television anchor Nikolai Svanidze, both members of the Public Chamber, spent a sleepless night with the villagers in the Prokofyevs' yard, ready to deflect any new attempt to raze their house with three tiny, dingy rooms.

On Monday, the marshals managed to break in and move all of Prokofyevs' belongings to a one-room apartment on Ulitsa Kadyrova, a Butovo street named after the slain Chechen president.

City Hall has long angered residents by evicting them from their homes and resettling them, usually in new apartments far from the city center. But rarely has an eviction turned violent.

The Butovo saga began several months ago when the authorities began moving residents from their houses, offering them new apartments and $50,000 in compensation, said Viktor Damurichev, head of the City Hall department for land resources. The city wants to build high-rise apartment buildings on the land.

Some people agreed to move, including Prokofyevs' neighbors, the Semyonovs, who received three apartments for their extended family. In April, City Hall filed a case against those who were refusing to leave in Moscow's Zyuzino District Court. The court ordered the residents to move and told the city to provide them with housing, without specifying any details about the quality of the housing.

Zyuzino prosecutors unsuccessfully appealed on behalf of the residents to the Moscow City Court last month.

On Monday, dozens of riot police and marshals stormed Prokofyevs' house, the first on their eviction list.

Prokofyev, an athletic teen wearing a red baseball cap, showed a reporter the bare rooms of his home. He said he and his mother, Olga Prokofyeva, had not been given keys or ownership documents for the new apartment their belongings had been moved to.

About 60 people wandered around their yard of trampled grass, offering emotional interviews to dozens of reporters.

"I am ready to die on my land, and I will not go anywhere," said Nikolai Ryzhenkov, 58. "It is enough that my parents got evicted by Stalin."

Most residents of the village lived in central Moscow until the 1930s, when they were moved to Butovo for various reasons, such as the resettlement of communal apartments.

A teetering fence in front of the Prokofyevs' yard was serving as a makeshift barricade, aided by old tires, planks and round brushes from a street-sweeper. Four colorful tents stood in the yard for residents to keep watch at night.

Three policemen sat lazily in the sweltering heat in their patrol car outside the Prokofyevs' home.

The residents said they had lived there for about seven decades, and some built houses and registered them with the authorities. All said they paid taxes for their homes and the land. A few said they had tried to get ownership rights for the land over the years but that local municipal authorities had blocked their attempts.

When Moscow decided to tear down the houses, the residents had no documents to prove in court that they owned the plots. The land at the center of the dispute is worth several million dollars today.

Kucherena would not criticize the court decision Tuesday, focusing instead on its poor implementation. He accused the riot police and marshals of being cruel and the authorities of acting in negligent haste.

"Local authorities do not have any documents justifying why the Prokofyev family -- the mother and son -- should move from their place in Butovo to their own apartment," he told reporters. "It appears that they are being evicted from their home in exchange for no-one-knows-what."

Alexander Lebedev, the billionaire State Duma deputy who ran against Mayor Yury Luzhkov in 2003, called for a parliamentary investigation into the eviction, saying it violated the constitutional right of Butovo residents to housing.

Lebedev, who arrived in the village in a sleek black Mercedes, told residents that court decisions should be respected "but Moscow courts -- against the law and the Constitution -- are being financed by the city authorities."

"In this situation, people who find themselves in a legal conflict with them should have the right to seek justice in other places," he said.

Lebedev has repeatedly accused city authorities of corruption, and he made those allegations the centerpiece of his mayoral bid.

A group of Butovo residents drafted a letter to President Vladimir Putin and the Brussels-based European Court on Human Rights on Tuesday, saying the courts had violated their constitutional rights and acted "in the interests of corrupt Moscow officials."

He said most residents had willingly moved and that those who had thought the compensation was unfair had lost their cases in court. "The judicial system treated them tougher than the Moscow city government," he said.

City Hall spokesman Sergei Tsoi told Ekho Moskvy radio that the court, not the city, had ruled to evict the people. He also called on Public Chamber members not to encourage people to disobey the law. Putin set up the Public Chamber in January to provide public oversight of the authorities. Critics have said the chamber will serve as little more than democratic window-dressing.

The country's ombudsman, Vladimir Lukin, also stepped into the fray Tuesday, slamming Moscow officials for "improper use of force" and for "the soulless treatment of people." He urged them to negotiate with the residents.

"Butovo residents should be resettled in proper housing and not in the intensive care wards of the nearest hospitals," Lukin said, Interfax reported.
Posted by Oread Daily at 11:16 AM