STUDENTS TAKE ON THE GOVERNMENT IN GREECE 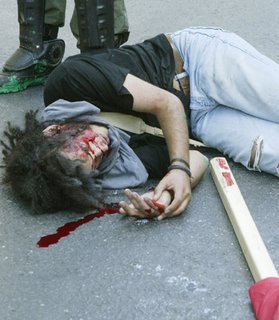 Greek Police attacked students in central Athens during a student rally yesterday protesting proposed "reforms" in education. There were many arrests and injuries.

Ironically, one of the issues is whether or not to maintain universities as "asylum" sites - under present Greek law, police cannot go onto university grounds to arrest students, a concession granted after the bloody 1974 protests at Athens' Polytechnic University.

Students held rallies in Athens and Thessalonica on Thursday to protest government measures for changes in education. Also taking part in the rallies were trade unionists in a show of solidarity to the students.

The students demand the full withdrawal of all governmental proposals for higher education. They demand free public education for all young people. They also demand the government secure the universal character of the degrees and take action to reduce unemployment for young people.

Students and trade unionists argue according to the Athens News Agency that their social and labor rights are "under attack" by the government measures, such as "through the privatization of public services, the abolition of the eight-hour working day and changes in the social insurance system." They deemed necessary "the joint confrontation of the problems, in accordance with the example set in France."

Students are also unhappy with other reforms being planned by the ruling parties, especially their intention to revise article 16 of the Greek Constitution that establishes the right of every citizen for free, public education. Therefore, private commercial universities will be established and private vocational training institutions will be officially recognized by the state. The students want more money invested in public education.

The protest march Thursday was the second big students demonstration in Athens in recent weeks. During the first one, about 10 days ago, clashes between the demonstrators and riot police also broke out. After the last protest march about 1,000 students from all over the country met in a plenary coordination meeting in Athens and called for a continuation of the actions against the government policy.

Occupations are underway at 219 universities around the country. In addition, 127 technical colleges had been taken over by protesting students. The standoff is likely to lead to this summerÂ’s exams being postponed.

In the Greek Universities, a report from Anarkismo explains, "...there is a long tradition of the students movement. Though less than in the 70s and 80s, a large number of students is interested in politics. There are organized students elections every year and the participation rates reach 70-80%. There is one students union in every department and assemblies are held a few times every year. Thus, a picture of hundreds of students in a hall debating on local and political issues is not uncommon for Greece. Occupations of universities and protest marches of thousands of students are the most usual actions for the students movement....Despite the fact the groups and organizations of the radical left are powerful in the movement, the assemblies and the open coordination meetings "calls the shots" in the movement. And these groups and organizations of the radical left have strongly supported this development and they take credit for it."

The following is a direct report from Indymedia-Athens on yesterday's action.

This morning (Thursday) 25.000 students demonstrated in Athens against the new laws that the government is planning to implement in the Greek universities. Also in Thessaloniki a demonstration will be held in the evening, as well as in other Greek cities

This morning 25.000 (Thursday) students demonstrated in Athens against the new laws that the government is planning to implement in the Greek universities. Also in Thessaloniki a demonstration will be held in the evening, as well as in other Greek cities. At the moment approximately 320 out of 350 university schools are occupied all over Greece, while the teachers are on strike for the same reason. Although big unrest in the Greek universities is taking place during the last months the Greek press is continuously ignoring them, or misinforms the public. It's characteristic that today popular Greek TV channel announced only 5.000 students in the demonstration. In today's demonstration the police attacked the students seriously, by throwing tear gases, noise bombs and hitting anyone, even journalists that were trying to film the violent attacks . At least 10 student's are injured, while one of them seriously in the head. Also, at least 10 are arrested. After the violent end of the demonstration thousands of student's from all over Greece were gathered in the Polytechnic school to further organise their struggle. The building was surrounded by police and fascists that were throwing stones inside. The hole scene reminds of what happened in November 74, when the dictatorship in Greece was ended after the student's fights.
Posted by Oread Daily at 10:47 AM