THE DISMAL SITUATION FOR THE WOMEN OF IRAQ 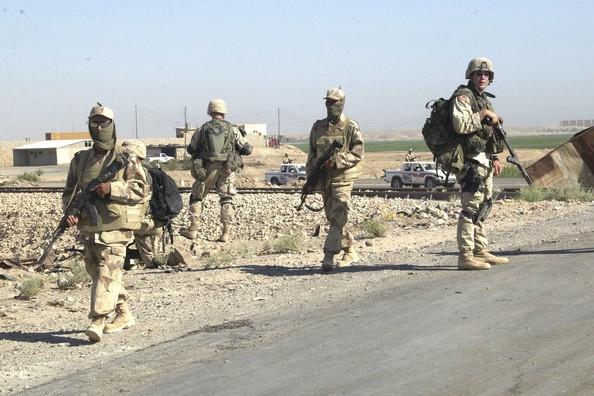 Last April a poll, conducted by the Integrated Regional Information Networks, a U.N. news agency covering sub-Saharan Africa, eight countries in central Asia, and Iraq of leaders of Iraqi women's-rights groups found that women were treated better and their civil rights were more secure under deposed President Saddam Hussein than under the current government.

IRIN reports the survey findings as follows: " ... women's basic rights under the Hussein regime were guaranteed in the constitution and more importantly respected, with women often occupying important government positions. Now, although their rights are still enshrined in the national constitution, activists complain that, in practice, they have lost almost all of their rights."

Moreover, leaders of women's groups say that in Iraq's new government, more men in power follow conservative Sharia (to wit, Islamic law) on women's rights and on their role in society. Senar Muhammad, president of the Baghdad-based non-government organization Woman Freedom Organization, is quoted by IRIN as saying, "When we tell the government we need more representation in parliament, they respond by telling us that, if well-qualified women appear one day, they won't be turned down. ... Then they laugh at us."

A view of this fact of life from the ground is given in the article below from The Independent (UK).

For the women of Iraq, the war is just beginning
By Terri Judd in Basra
Published: 08 June 2006

The women of Basra have disappeared. Three years after the US-led invasion of Iraq, women's secular freedoms - once the envy of women across the Middle East - have been snatched away because militant Islam is rising across the country.

Across Iraq, a bloody and relentless oppression of women has taken hold. Many women had their heads shaved for refusing to wear a scarf or have been stoned in the street for wearing make-up. Others have been kidnapped and murdered for crimes that are being labelled simply as "inappropriate behaviour". The insurrection against the fragile and barely functioning state has left the country prey to extremists whose notion of freedom does not extend to women.

In the British-occupied south, where Muqtada al-Sadr's Mehdi Army retains a stranglehold, women insist the situation is at its worst. Here they are forced to live behind closed doors only to emerge, concealed behind scarves, hidden behind husbands and fathers. Even wearing a pair of trousers is considered an act of defiance, punishable by death.

One Basra woman, known only as Dr Kefaya, was working in the women and children's hospital unit at the city university when she started receiving threats from extremists. She defied them. Then, one day a man walked into the building and murdered her.

Eman Aziz, one of the first women to speak publicly about the dangers, said:"There were five people on the death list with Dr Kefaya. They were threatened 'If you continue working, you will be killed'."

Many women are too afraid to complain. But, fearful that their rights will be eroded for good, some have taken the courageous step of speaking out.

Dr Kefaya was only one of many professional women murdered in recent months. Speaking to The Independent near Saddam's old palace in the middle of Basra, Mrs Aziz, reeled off the names of other dead friends. Three of her university class have been killed since the invasion. "My friend Sheda and her sister. They were threatened. One day they returned to their house with two other women. They were all shot," she said. Her language is chillingly perfunctory.

"And my friend Lubna, she was with her fiancé. They shot him in the arm and then killed her in front of him," she explained. Then there were the two sisters who worked in the laundry at Basra Palace base. With a shrug, she briefly detailed each life cut short.

Under Saddam, women played little part in political life but businesswomen and academics travelled the country unchallenged while their daughters mixed freely with male students at university.

Now, even the most emancipated woman feels cowed.

A television producer Arij Al-Soltan, 27, now exiled, said: "It is much worse for women in the south. I blame the British for not taking a strong stand."

Sajeda Hanoon Alebadi, 37, who - like Mrs Aziz - has now taken to wearing a headscarf, said: "Women are being assassinated. We know the people behind it are saying we have a fatwa, these are not good women, they should be killed."

Behind the wave of insurgent attacks, the violence against women who dare to challenge the Islamic orthodoxy is growing. Fatwas banning women from driving or being seen out alone are regularly issued.

Infiltrated by militia, the police are unwilling or unable to crack down on the fundamentalists.

Ms Alebadi said: "After the fall of the regime, the religious extremist parties came out on to the streets and threatened women. Although the extremists are in the minority, they control powerful positions, so they control Basra."

To venture on the streets today without a male relative is to risk attack, humiliation or kidnap.

A journalist, Shatta Kareem, said: "I was driving my car one day when someone just crashed into me and drove me off the road. If a woman is seen driving these days it is considered a violation of men's rights."

There is a fear that Islamic law will become enshrined in the new legislation. Ms Aziz said: "In the Muslim religion, if a man dies his money goes to a male member of the family. After the Iran-Iraq war, there were so many widows that Saddam changed the law so it would go to the women and children. Now it has been changed back."

Mrs Alebadi estimated that as many as 70 per cent of women in Basra had been widowed by the constant conflicts. "You see widows on the streets begging at the intersections."

Optimists say the very fact that 25 per cent of Iraq's Provincial Council is composed of women proves women have been empowered since the invasion. But the people of Basra say it is a smokescreen. Any woman who becomes a part of the system, they say, is incapable of engineering any change for the better. Posters around the city promoting the constitution graphically illustrate that view. The faces of the women candidates have been blacked out, the accompanying slogan, "No women in politics," a stark reminder of the opposition they face.

Ms Aziz said: "Women members of the Provincial Council had many dreams but they were told 'With respect, you don't know anything. This is a world of men. Your view is good but not better.' More and more they just agreed to sign whatever they were told. We have got women in power, who are powerless."

Many of the British officers in Basra say they feel "uncomfortable" with the situation but a spokesman for the Foreign Office would only say: "As part of the new government's programme, they do say in their top 10 items to be looked at that women constitute half of society and are nurturers of the other half and, therefore, must take an active role in building the society and the state. Their rights should be respected in all fields."

In the villages around Basra, the shy women who peer round doorways are uncomplaining. For one Marsh Arab, Makir Jafar, the fact she has been given enough education to help her 10-year-old son with his homework is enough. "Life is nice. There is the river. I do not want for anything," she said.

There is a growing fear among educated women, however, that the extreme dangers of daily life will allow the issue of women's oppression to remain unchallenged. In Mrs Kareem's words: "Men have been given a voice. But women will not get their part in building this country."
Posted by Oread Daily at 2:09 PM