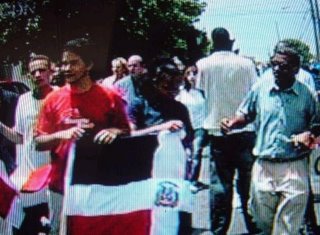 Social organizations, political institutions, movements and independent activists from Dominican Republic and other countries are holding an alternative summit to the one by the Organization of American States (O.A.S.) which started yesterday.

The "First Alternative Summit of the Nations" is taking place in the Santo Domingo Autonomous University’s (UASD) "Pedro Mir" library, organized by, among other entities, the Alternative Social Forum, the church San Romero of the Américas, the Woman and Health Collective, the Dominican Popular Movement, the Continental Bolivarian Coordinator, Dominican Republic chapter and the New Patriot Revolutionary Movement.

The OAS Summit comes as the organization itself remains relatively ineffectual. Perhaps the biggest problem the OAS faces, according to some analysts, is that it is still very much controlled by Washington at a time when the administration of US President George W. Bush remains caught up with Iraq, the "war on terrorism" and Iran. Indeed, the OAS has been described as an institution with 33 mice and one very large cat."

And the "large cat" could care less about the institution as a whole at the moment.

US Secretary of State Condoleezza Rice had been expected to attend the meeting. But in what is sure to be seen as evidence of US inattention, Deputy Secretary of State Robert Zoellick will go instead. Rice is focusing on other issues, a senior State Department official said.

Another US official said Thomas Shannon, the top US diplomat for Latin America, had also canceled plans to attend.

Anyway, The following comes from Dominican Today. The second and somewhat related article comes from Granma.

SANTO DOMINGO. - At mid-morning heavily-armed security forces, trained dogs and water cannons prevented representatives from more than 30 social and political organizations and other people from reaching the place where the Summit was taking place to submit a document, elaborated after the staging of "an alternative" Summit in the campus of the Santo Domingo Autonomous University.

In their document, which was received by an O.A.S. representative several blocks from the Dominican Foreign Ministry, where the Assembly is taking place, the demonstrators demand the inclusion in the agenda of talks of its 36th General Assembly, points including the elimination of the foreign debt as well as the sovereignty of the different nations and peoples over their petroleum, gas, coal mines, water, maritime, fauna, flora and conservation of the biodiversity.

Granma (Havana): Venezuela is to present a resolution on the extradition of "terrorists" ... an implicit allusion to the case of Luis Posada Carriles, currently detained in the United States ... to the General Assembly of the OAS, in session until Tuesday in the Dominican Republic.

The text calls on "all member states to bring to trial and, in due case, extradite… any individual who participates in the planning, preparation, commission or financing of acts of terrorism," according to a draft published this Sunday in Santo Domingo, the venue of the OAS Summit.

The resolution also calls on countries in the hemisphere to "take the corresponding measures… to ensure that the conditions of refugee or asylum seeker are not recognized in the cases of persons concerning whom there are founded motives to consider that they have committed a terrorist crime."

The text drafted by Venezuela also asks for "actions to strengthen hemispheric legal cooperation in extradition matters" and calls on countries of the region to "ensure that no person received after being extradited is subjected to serious violations of their human rights."

Venezuelan justice is demanding the extradition of Posada Carriles ... who confronts migratory charges in the United States ... for the 1976 sabotage of a Cubana Aviation passenger plane, which was plotted in Venezuela, but which the United States has still not granted.
Posted by Oread Daily at 2:11 PM