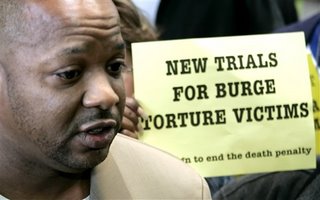 Despite a protest today demanding the release of a report about torture carried out by Chicago cops, a judge in Cook county delayed that release once again.

Biebel isn't promising to release the results of the four-year investigation in two weeks, but he scheduled a June 30th hearing to discuss it again.

Two special prosecutors were appointed in 2002 to look into claims that 192 black men were tortured in the 1970s and 1980s by a unit led by former Chicago Police Lieutenant Jon Burge.

Burge has denied any misconduct but was fired in 1993 for mistreating a suspect.

(An earlier article on the torture accusations can be found at http://oreaddaily.blogspot.com/2006/05/activists-and-un-calls-for-action-on.html)

The first article below is from WQAD in Moline, Illinois. The second is a press release announcing the protest which took place today.

CHICAGO Dozens of protesters have turned out at the Cook County criminal courts building today to push for the release of a report on allegations that Chicago police tortured suspects.

They're gathered outside the courthouse where Chief Criminal Court Judge Paul Biebel (BEE'-buhl) is scheduled to hold a hearing on the status of that report. Earlier this month, Biebel delayed the report's release pending Illinois Supreme Court action on an appeal.

Two special prosecutors were appointed in 2002 to look into claims of torture by a unit led by former Chicago Police Lieutenant Jon Burge. He's denied any misconduct but was fired in 1993 for mistreating a suspect.

The Campaign to End the Death Penalty and family members of victims of police torture will rally to demand full disclosure of torture under former Chicago police Commander Jon Burge, criminal indictments against the officers responsible and new trials for torture victims. The event is to take place Friday, June 16, 2006 at 9 a.m. at Cook County Courthouse, 2600 S. California.

Who: The Campaign to End the Death Penalty and family members of victims of police torture.

What: Activists will rally to demand full disclosure of torture under former Chicago police Commander Jon Burge, criminal indictments against the officers responsible and new trials for torture victims.

Activists and family members of inmates who say they were coerced into false confessions will rally Friday to demand justice for victims of police torture under former Commander Jon Burge. The rally outside the courthouse will take place just prior to a hearing on efforts by special prosecutors Edward Egan and Robert Boyle to release the findings of their four-year, $7 million investigation into the torture. Judge Paul Biebel already has ruled that Egan and Boyle could release their report, but an appeal by a former Assistant States Attorney who served under current Mayor Richard M. Daley has delayed its release. In an article last week in the Chicago Reader, reporter John Conroy revealed the likely identity of the former prosecutor as Larry Hyman, who took a statement from Andrew Wilson in an Area 2 police station but failed to ask him whether his confession was given voluntarily. Burge was fired for Wilson’s torture in 1993 but still collects a pension.

“The same cops and prosecutors who have been covering up torture for 30 years want to cover it up today,“ said Julien Ball, an organizer with the Campaign to End the Death Penalty (CEDP) in Chicago. “We say enough is enough. We need the report to come out, we need the names of torturers released and we need criminal prosecutions.”

"Torture is happening in our very own back yard. For years, Jon Burge systematically tortured African American men in police stations on the South Side of Chicago. You don’t have to believe me. The Office of Professional Standards (OPS) the Chicago police’s own investigatory agency found that physical abuse did occur and that it was systematic. Yet many of Burge’s victims remain behind bars. Without a doubt, they deserve new trials. My question is, why isn’t Jon Burge doing time?" said Alice Kim, National Organizer of the CEDP.

Burge and his detectives have been dogged by over 190 allegations of torture using techniques such as electroshock, Russian roulette and suffocation to extract false confessions from African American men on the South Side of Chicago while in police custody. Some of the torture victims, known as the Death Row 10, were sentenced to death, while many others still are serving long prison terms. Madison Hobley, one of the Death Row 10, was pardoned based on innocence by former Governor Ryan in 2003. “I can’t understand why these prosecutors want to keep the truth from the public,” he said. “They are supposed to serve the public, and we have a right to know what happened under their watch.”

Family members of police torture victims are available for interview.
Posted by Oread Daily at 11:50 AM