THE ATOMIC BOMBING OF INDIAN COUNTRY: "I AM BECOME DEATH, THE SHATTERER OF WORLDS" MADE REAL 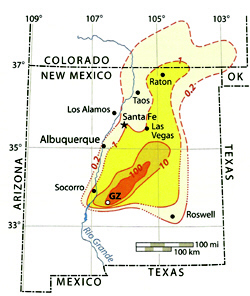 The USA still had to kill tens of thousands of Japanese civilians and all that, but World War II effectively ended one day in New Mexico.

On Monday morning July 16, 1945, the world was changed forever when the first atomic bomb was tested in an isolated area of the New Mexico desert.  The test known as Trinity took place on the Alamogordo Bombing and Gunnery Range, about 230 miles south of  Los Alamos, New Mexico.  As reported at the Trinity Atomic Web site:


The nuclear blast created a flash of light brighter than a dozen suns. The light was seen over the entire state of New Mexico and in parts of Arizona, Texas, and Mexico. The resultant mushroom cloud rose to over 38,000 feet within minutes, and the heat of the explosion was 10,000 times hotter than the surface of the sun! At ten miles away, this heat was described as like standing directly in front of a roaring fireplace. Every living thing within a mile of the tower was obliterated. The power of the bomb was estimated to be equal to 20,000 tons of TNT, or equivalent to the bomb load of 2,000 B-29, Superfortresses!

After witnessing the awesome blast, Oppenheimer quoted a line from a sacred Hindu text, the Bhagavad-Gita: He said: "I am become death, the shatterer of worlds." In Los Alamos 230 miles to the north, a group of scientists' wives who had stayed up all night for the not so secret test, saw the light and heard the distant sound. One wife, Jane Wilson, described it this way, "Then it came. The blinding light [no] one had ever seen. The trees, illuminated, leaping out. The mountains flashing into life. Later, the long slow rumble. Something had happened, all right, for good or ill."

For good or ill?

You be the judge.

Well, you and those who were made ill.  You and the many who have suffered the consequences over the years.

You see, nobody thought it might be prudent to evacuate or even warn local residents in advance - or following - the test. The military, the State had to keep this a big secret...and their was a danger of law suits. Those people, those unwarned people, were exposed to massive amounts of radiation.  They inhaled it in from the air, they ingested it from contaminated food, they drank it in from water and milk. General Leslie Grove wrote in a memo to the War Department on July 18, 1945, following the test:

The cloud traveled to a great height first in the form of a ball, then mushroomed, then changed into a long trailing chimney-shaped column and finally was sent in several directions by the variable winds at the different elevations. It deposited its dust and radioactive materials over a wide area.

Several ranchers reported that fallout resembling flour was visible for 4 to 5 days after the blast, and residents living as close as 19 km from ground zero collected rain water from metal roofs for drinking.

As cows and goats grazed in fallout-contaminated pastures, iodine 131 contaminated their milk. Children received higher thyroid doses because they drank much more milk than adults, and because their thyroids were smaller and still growing.

Fallout was discovered 200 miles from the test site.  In fact an article published in 1997 in the Bulletin of Atomic Scientists says:

The Trinity test also resulted in at least one hot spot in Indiana, over 1,000 miles away. One month after the test, the customers of the Eastman Kodak Company complained of buying fogged X-ray film. After an investigation, a physicist at Eastman Kodak determined that packing material that had been made from corn husks at a plant in Indiana had become radioactively contaminated. He deduced that the origin of the contamination was from an atomic explosion. The physicist's knowledge of the secret project was not altogether surprising: the Kodak Company ran the Tennessee Eastman uranium processing plant at the Oak Ridge National Laboratory.

Nobody told anybody living in New Mexico...anything.  The War Department said everything was fine.  Not to worry.

Currently, the Nuclear Regulatory Commission states that members of the public should not receive more than 2 millirem (about 0.002 Roentgen) of radiation in any one hour from external radiation sources in any public area. The exposure rates following the Trinity test were more than 10,000 times this recommended dose level.

Did I mention that Los Alamos National Laboratory (LANL) lies in the midst of New Mexico's Indian Country  - where by the way  LANL for the next 70 years still designed, built, tested, and disposed of radioactive and other toxic waste in what was once a pristine environment filled with sacred sites and rich grazing lands that for hundreds, if not thousands, of years supported (but no longer can) a subsistence lifestyle for Pueblo peoples and other later-coming immigrants.

Research conducted and reported on in Health Physics notes as of the of 2010, "Evaluations of Trinity fallout published to date have not addressed internal doses to members of the public following intakes of contaminated air, water, or foods."

No one gave a hoot what happened to a bunch of Indians, Mexican  Americans, ranchers, and other desert sorts scattered about the New Mexico plains and plateaus.  No one with any authority gave a damn.


They pretty much still don't.

The following is from Indian Country Today.


Trinity Site explosion, 0.016 second after explosion, July 16, 1945. Note that the viewed hemisphere's highest point in this image is about 200 meters high.