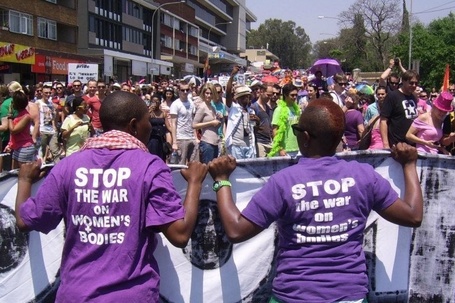 This past weekend they had a gay pride march in Johannesburg, South Africa.  This gay pride march ended up telling us more about racism, white supremacy, and white entitlement then about anything else.  This march was organized by an all white board with an all white agenda.   This was an all white board with an all white agenda that I seriously doubt even realized what they were doing.  Well, I would have said that except for the fact that their actions ended up exposing that they knew exactly what they were about..  It seems that in a country where attacks  on and murders of black lesbians have become a horrible reality this all white board didn't get it...didn't seem to see any reason why this bit of reality should have anything to do with their happy day of pride.

This gay rights parade, too typical by far, was more of a party with corporate sponsors then any sort of political event.  Too many, if not most, gay pride marches have taken this turn.  Times Live summed it up this way:

The de-politicisation of such a festival is disturbing, because it has become a mere party for people who are out and proud, not an act of protesting against discrimination, and protest against the fact that unlike the (mostly white) liberal minority, there are (mostly black) people who suffer – sometimes with fatal consequences – at the hands of their homophobic communities.

So in the midst of all the fun comes this group of folks from the "One in Nine" campaign...and they aren't smiling and laughing.   Women's Net explains,


..The One In Nine Campaign was established in February 2006 at the start of the rape trial of Jacob Zuma, to ensure the expression of solidarity with the woman in that trial as well as other women who speak out about rape and sexual violence. The Medical Research Council (MRC) study on sexual violence (2005) indicated that only one out of every nine rape survivors report the attack to the police....The One In Nine Campaign works with organizations and institutions involved in HIV/AIDS, violence against women, women's rights, human rights, and lesbian, gay and bisexual activism to ensure that the issue of the sexual rights of all women is addressed...

The women from the group confronted the marchers with leaflets and even civil disobedience demanding that a minute of silence for those who have been killed because of their sexual orientation or gender expression.  They protested the white, (gay) male agenda pushed forward for the march.  In response they were attacked by the overwhelmingly white, gay male marchers verbally and physically.  A One in Nine Campaign member said: “We have a right to be here...  This is a march for LGBTI people. Are we not gays and lesbians?”

A different sort of apartheid is alive and –literally – kicking in the gay community.


The personal choice to be outwardly gay as opposed to secretly is a political act, defying society and narrow-mindedness. The choice to ignore the plight of a fellow member of this community is a political statement, saying loud and clear that you don’t care.


Organizers and marchers refused to see the reality of the women who are far less fortunate than them, and turned a blind eye or turned hostile toward this reality presented to them. The suffering of others is ignored for a mere now quite insignificant parade, which has proven to make no difference.

They did not want their pretty pink parade marred by people presenting a harsh truth.

It is, in fact, more than that.  This sort of crap  is a white supremacist, racist statement made by people who gay or not consider the color of their skin the most important factor in their lives and consciously or not are more than happy to accept the privileges that come with that decision.

There was nothing to be proud of in this Pride march.

The following is from SACSIS.

Johannesburg's Gay Pride Parade: Not Much to Be Proud Of
By Gillian Schutte · 8 Oct 2012

This weekend at the Joburg Gay Pride parade, the One in Nine Campaign disrupted the parade to make a call for one minute of silence on behalf of the many black lesbians and transsexual individuals who have been murdered over the past few years because of their sexual orientation and gender expression. It was an act of defiance and civil disobedience.


The thing about civil disobedience is that it confronts and holds accountable the norms that exist in society today. So when Joburg Pride organiser and Chair, Tanya Harford toldMamba Online that the ‘incident’ at the Joburg Gay Pride parade on Saturday, October 6 could have been avoided if the Lesbian Feminist group One in Nine Campaign had just asked them for permission to attend the march, you can be sure she missed the point completely.


Although Joburg Pride adopted the slogan ‘protecting our rights’, the One in Nine Campaign engaged in this act of civil disobedience because the gay rights organisation clearly did not have the rights of the entire LGBT community in mind. Asking permission to intercept an event that has become more of a sponsor-driven party than a movement with a social justice or gay rights political agenda would defeat the point. If the One in Nine Campaign had asked permission it would have been slipped into the programme as an afterthought and given political legitimacy to a movement that does not deserve this legitimacy since it did not even consider the issue of a minute of silence to commemorate those murdered black lesbians of its own volition.


It was entirely necessary that the One in Nine Campaign ambushed the depoliticised Joburg Gay Pride Parade and forced a point. What transpired also served to reveal the deep malady of racism in South Africa.


Let me describe what happened when the Joburg Pride Parade encountered a group of about twenty black lesbians and gender non-conforming feminists who had blocked the road with banners and bodies.  The banner carried by One in Nine said “No cause to celebrate”.  They handed out pamphlets to explain why they were there. They laid their bodies on the ground to prevent the parade from continuing. And mostly they called out clearly for one minute of silence.


A social media video recorded the entire protest so those who were not there got to witness the scene. What unfolded, though horrifying, was perhaps not that surprising, given that this is South Africa.


When the pride movement, comprised of mainly white individuals, reached the blockade of black lesbians, who stood their ground, they (One in Nine) were threatened with all manner of abuses.  They were told by Joburg Pride organiser, Jenny Green, that the route was hers. She was sitting in her vehicle and revved her motor in a manner that was construed as her threatening to drive over the protestors -- and many encouraged her to do just this.


“Go back to the location!” shouts one voice, as a white girl pulls both fingers at the camera operator.  “Drive over them.” “Get out of here,” are insults audible in the footage.


But One in Nine stood firm whilst LGBT revellers threw insults at them.


This was a fight divided along racial lines and it was nasty.


The nastiness came from the Pride organisers and participants. Those who did the attacking of One in Nine clearly did not care that they were physically abusing a group of women.  It seems clear to me that this was based on the fact that they were black – and they were getting in the way.


It did not seem to matter that what they were asking for was one minute of silence for an issue that has serious implications for the gay community. Except that this is not a white issue because it is mainly black women and black transsexuals who are victims of this particular crime statistic.


And looking at the board of Joburg Pride – they are all white. Therefore, it is the white agenda that matters more to the current Gay Pride in Johannesburg...whatever this is. The right to beat up on black lesbians and gender non-conforming feminists perhaps? Or possibly the right to braai?


The violence and hatred shown to the One in Nine protestors was another example of white entitlement. Not a jot of embarrassment was shown by the abusers. This was just another form of black-bashing, another manner in which to show just how little most white people empathise with black issues, black bodies and black emotionality.  The inherent mantra of ‘white is right’ was written all over this event and these white moderates were quite prepared to do grievous bodily harm to the black female bodies that stood defiantly before them.


The implications are too horrible to consider – and yet we must. We must confront this racism head on and stamp it out.

Should black people boycott white initiatives and disengage from white struggles completely to protest this vile occurrence? Why should black support continue to rubberstamp movements that claim to be representative and yet push a white privileged and racist agenda?


The fact that Joburg Pride failed to adequately address the issue of hate crimes against black lesbians in a year where at least eight black LGBT people were slaughtered in the wave of homophobia that recently swept South Africa, is telling. More telling is the fact that they failed to adequately address any pertinent issue for the LGBT community at all because, it seems, what began as a representative human rights movement for LGBT rights in 1990 has descended into a commercialised event that is more about float building and parading than highlighting political issues.


This is not to say that celebration is frowned upon. To the contrary, when coupled with a political agenda, celebration and carnival are very effective means of destabilising draconian laws and social intolerance. Devoid of an agenda that seeks to change societal views or call for human rights, celebration holds no sway.


Most infuriating for me is the fact that Harford does not even offer an apology to the One in Nine protestors when explaining her side of the story. She is caught on camera abusing and assaulting the protestors, yet she remains righteously indignant and puts the blame in their court. Speaking to Mamba Online, Harford insists that the protest was "absolutely inappropriate and illegal". She goes on further to say, "They had none of the necessary permissions. They also embarrassed the entire LGBT community. The campaign wasn’t explained nor was it clear about what their purpose is."

Did this give her the right to physically assault the black lesbian protestors? It seems similar to the logic applied to the massacre of the 34 miners in Marikana.


It has become way too acceptable for the South African public to witness the assault on black bodies and somehow normalize it. Harford should make a public apology and resign with immediate effect. After all, it is she who has embarrassed the global LGBT movement. If she doesn’t, then we will never break the white hold over the narrative of this country – an ominous and distasteful narrative that says abuse of black bodies is acceptable, while white issues remain supreme.


As the narrator says in the social media video of the incident, “Pride has stopped being a movement that charters new futures and has, with a few exceptions, been stripped of all political content.”


"The depoliticisation of most 'prides' has allowed old racial apartheid to be translated into a new economic apartheid, which is clearly evident in many pride celebrations."


I don’t see that we have any other choice. We need more civil disobedience from organisations and movements if we are to confront and hold accountable these racist norms that exist in our society.


The history of Gay Pride has its roots firmly in a political agenda.