NOTHING NEW UNDER THE SUN IN AFGHANISTAN FOR WOMEN

Violence against women is mostly caused by people's poor awareness of women's rights, forced marriages, traditions, and shortcoming in law enforcement as well as security challenges

More than 4,000 incidents of violence against women have happened in nine months last year in Afghanistan, a senior official in Ministry of Women's Affairs said. 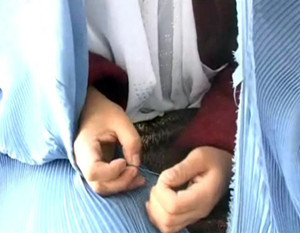 TOLOnews, Feb. 2, 2011: Fauzia, a girl in her twenties, claimed she was raped by local security forces belonging to a commander named Ghafar in Herat. Her father said that security forces in the district arrested one of the rapists, but after he was identified to be a bodyguard of the district chief, he was released without punishment.
Officials in ministry of women's affairs strongly condemned stoning of a newly-wed couple in northern Kunduz province and rape incidents in western Herat province.
"We have called that those behind such cases must face punishment," Deputy Women's Affairs Minister Palwasha Kakar told local media.
Violence against women is mostly caused by people's poor awareness of women's rights, forced marriages, traditions, and shortcoming in law enforcement as well as security challenges, officials said.
More than 2,400 cases of women's violence had taken place in the capital Kabul and the rest of the violence cases had happened in different other provinces.
Violence against women is believed to be even more than it looks in Afghanistan.
Council of religious clerics in western Afghanistan urged the government to bring the rapists of the young girl to justice.
A young girl, in her twenties, was raped by provincial security forces after being abducted from her house in western Herat province.
Some Afghan parliamentarians criticised Women's Affairs Ministry for not being able to defend women's rights.
"They should have a serious approach and they must take to the streets to defend women's rights," Ms Nilofar, an Afghan MP said.