Trying to figure out what the heck is going on in Tunisia.  These posts may help.
The  first post below provied some current information and is from al-bab.com .  The second is a bit more analytical and is from ZNet.org by way of The Indypendent... 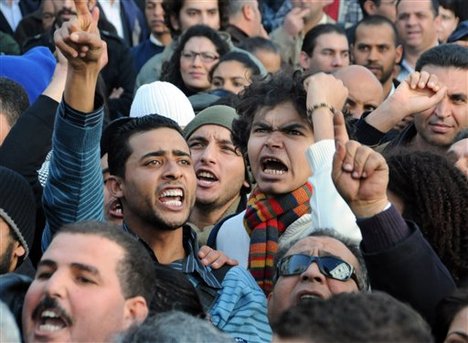 TUNISIA: THE LAST DAYS OF BEN ALI
Today is exactly four weeks since the start of the Tunisian uprising and I was planning to write another summary of the day's main events. But, honestly, I can't. There's so much going on, so much chaos.
Let me just point to two things which, basically, say it all.
One was the demonstration today in Kairouan. I've been there on holiday and it's not an especially big town. But look at the video: that protest is huge, huge, huge.
The other is this report from the New York Times: "Tunisia Rioters Overwhelm Police Near Capital". Referring to today's events in Hammamet, it says:

The police on Thursday all but abandoned this exclusive Mediterranean beach town — haven to the capital’s rich and powerful — as rioters calling for the ouster of Tunisia’s authoritarian president swarmed the streets, torched bank offices and ransacked a mansion belonging to one of his relatives.

That is not the only place where the security forces are fighting a losing battle.
Regional commanders are no doubt bracing themselves to deliver the bad news to President Ben Ali if they haven't already done so: they can no longer cope and the only way to restore order now is through a political solution.
Ben Ali is speaking as I write this. In any normal country it would have been his resignation speech. Instead, he has  promised to stand down in 2014, but the thought in many Tunisians' minds must surely be: why wait till then?
In the meantime, he seems to be offering a bit more freedom and promising to stop shooting demonstrators. But even that seems too late now and, anyway, after 23 years of repression who is going to take him at his word? The Muslim weekend is upon us and, I suspect, many Tunisians will judge that this is the moment to finish him off.
Unless the president has some totally unexpected tricks up his sleeve (which I doubt), he'll be gone well before 2014. If the protests continue on the same scale this weekend, I'd give him about three days.
++++++++++++++++++++++++++++++++++++++++++++