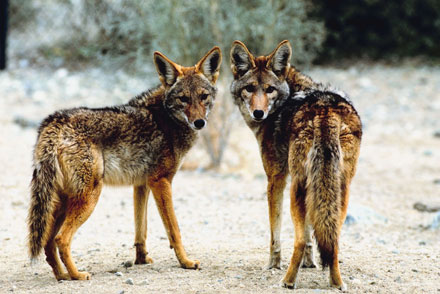 I find it odd how humans seem determined to kill everything that moves. Would it hurt to try and recognize that coyotes have a right to live? Coyotes, you say, who gives a shit about coyotes. Me, for one.

The following is from the Ottawa Citizen.

BY TOM SPEARS, OTTAWA CITIZENJANUARY 12, 2011 5:11 PM
OTTAWA — Three animal welfare groups are asking Ontario to ban coyote hunting contests, as two Ottawa hunting groups are taking aim at the animals for the second year.
The Osgoode Township Fish, Game and Conservation Club is running one hunting contest, with a new shotgun for a prize. And Al’s Corner Store in Kinburn runs a “weigh-in” for coyotes — not directly a hunting contest, the store owner says, but one that results in hundreds of coyotes being shot or trapped.
Ontario hunting laws say it is an offence “hunt for hire, gain or the expectation of gain,” or to “induce another person” to do so. And that, says Donna DuBreuil of the Ottawa-Carleton Wildlife Centre, means you can’t offer prizes for hunting.
“They’re illegal and we want the ministry to take action,” she said.
Her group, along with the Animal Alliance of Canada and the Canadian chapter of Born Free USA, have hired a lawyer to analyse the law and write to the Ministry of Natural Resources, asking it to intervene.
“This is not hunting. This is a cull,” she said. “This is essentially going out like the Wild West” and “uniformly killing animals.
“The coyote population has continued to expand and we have to learn to live with them.”
The owner of the Kinburn hunting supply store that runs one coyote event says that contest is not a hunting contest, but a chance to weigh coyotes and gather valuable data on their population.
Hunters and trappers bring in coyotes for weighing. In return they get a ticket in a draw, said Al Mills of Al’s Corner Store. He says the area suffers from an overpopulation of coyotes.
But he said this isn’t really a coyote hunting contest because contestants can bring in the coyote live. So far he said he has taken in “hundreds” of coyotes — one of them alive in a cage and the rest dead.
That contest continues until mid-March. Response among hunters “is amazing. We’re over last year’s numbers already.”
The draw prizes are donated by the hunting industry, he said, but he wouldn’t say what they are.
Last year both Ottawa coyote contests offered guns as prizes.
The Osgoode contest costs $2 to enter. It advertises a chance to “win great prizes and help to keep our region safe and prosperous.”
The Ministry of Natural Resources confirmed the lawyer’s letter had arrived but the minister hadn’t seen it yet.A spokeswoman said the ministry wasn’t aware of any data from weighing the carcasses, and hadn’t asked for any.
“Scientific research should really be done by scientists,” she said.
Coyote populations have expanded in North America in the past decade, and many of the animals are living closer to towns and cities than they used to.
© Copyright (c) The Ottawa Citizen
Posted by Oread Daily at 4:45 PM