COP IS BACK ON THE JOB INSTEAD OF IN JAIL

If you or I committed blatant perjury on the witness stand, you or I would land in the hoosegow.  That, however, is not what happened to Marysol Domenici, who was one of the first officers on the scene at the Fruitvale BART station in Oakland on Jan. 1, 2009, when an unarmed Oscar Grant was shot in the back.


Can't say I am surprised.


From the San Francisco Bay View. 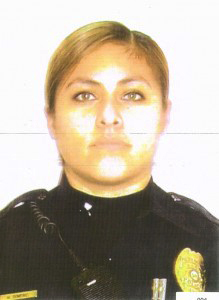 Marysol Domenici
Last week an officer who blatantly lied under oath was given her job back. We’re talking about Marysol Domenici, who was one of the first officers on the scene at the Fruitvale BART station in Oakland on Jan. 1, 2009, when an unarmed Oscar Grant was shot in the back by convicted former BART cop Johannes Mehserle.

Domenici was fired after an independent investigating law firm,Meyers Nave, concluded she had lied about what took place the night of Grant’s murder. Domenici, who had been on 15 months paid leave at the time of her firing, appealed, and the arbitrator ruled she be immediately reinstated with back pay. The arbitrator, William Riker, insisted that the prior investigation was flawed and that he saw no evidence that Domenici was untruthful.
Rulings like these have given people more and more reason to have little confidence in the justice system. What has taken place over the past two years around the killing of Oscar Grant is something all of us involved with social justice issues will have to study for years to come. How can one be so meticulous in following every “proper” step to seek justice, only to see it thwarted at every turn?
To hear an arbitrator say that Domenici didn’t lie is beyond outrageous. Here’s a few things that are glaring.
During the preliminary hearings, Domenici under oath emphatically stated that Oscar Grant had grabbed her arm. However, a video was showed of Grant holding on to the arm of Oscar’s friend, Jack Bryson. When confronted with the video, Domenici recanted her statement.
Under oath, Domenici claimed that there were 40-50 people on the BART platform, the scene was chaotic and she feared for her life. Those were her exact words: She feared for her life. However, when a video is shown, there is NO ONE on the platform. Where were the 50 people?
Not only does Domenici’s training as a black belt fighter suggest a disciplined and methodic approach toward dangerous situations, she claimed she feared for her life, yet never called for backup. She also said that she would’ve used lethal force and killed somebody.
During the actual trial, when Domenici took the stand, she was confronted with her lies about 40-50 people being on the platform. She tried to switch it up and say the train that was packed with passengers returning home from New Year’s celebrations was “an extension” of the platform. Yes, the train was packed, but no one was rowdy or jumping or confronting officers.
Domenici also claimed that Oscar’s friends caused his death by not cooperating. She made the claim they had struggled against her. But when questioned, she noted that Grant’s friends didn’t struggle. What was crazy was Domenici had pulled out a taser and had pointed it at the heads of some of Grants friends threatening to shoot them, which was not only against department protocol but also deemed unconstitutional by the 9th Circuit Court.
For folks in the Bay Area who have followed this case, from day one there was a call to have all the officers on that BART platform charged with crimes after Oscar Grant was murdered. While it was Johannes Mehserle who did the shooting, Domenici and her partner, Tony Pirone, who was also fired and is now appealing, set the hostile climate that led to Grant’s death. 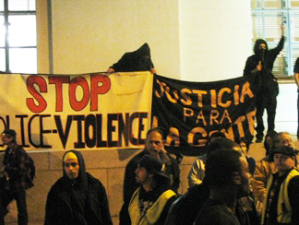 Justice for Oscar Grant activists demonstrate outside the courthouse in Los Angeles. – Photo: Davey D
By deliberately exaggerating and making it sound like things were out of control, Domenici described the police mindset that explained why anyone the officers grabbed that night was likely to be subjected to harsh treatment. This is what happened to Grant and his friends. Even after he was shot, he was handcuffed because the officers claimed the environment was hostile.

BART says the ruling to reinstate Domenici is out of their control. The ruling has left many in the Bay Area asking some hard questions: 1) How could Marysol Domenici be reinstated in the face of all her wrongdoings? 2) Why has she not been charged with perjury?
By all accounts, she lied on the stands. Her sworn accounts do not coincide with what was shown on videos. They also change from the preliminary trial to the trial. Why hasn’t Alameda DA Nancy O’Malley hit Domenici with perjury charges? The statute of limitations has not run out, has it? If not, O’Malley should bring this question to the feet of California’s new Attorney General Kamala Harris.
Many are vowing to keep pushing in the upcoming New Year. Thus far, two years of hard work have been stomped on by far right conservative judges – Robert Perry, who presided over the trial and sentencing, and now this arbitrator, who says he found nothing untruthful.
All one has to do is read her statements, look at the video and see clearly she lied. For some, the admission that cops could do something so egregious is unfathomable and thus even in the face of something this glaring, they give the police the benefit of the doubt. That has got to change in the New Year.
Listen to Davey D on Hard Knock Radio Monday-Friday at 4 p.m. on KPFA 94.1 FM or kpfa.org. He can be reached at mrdaveyd@aol.com. Visit his website, daveyd.com, and his blog, Davey D’s Hip Hop and Politics, where this story originally appeared.
Posted by Oread Daily at 5:06 PM