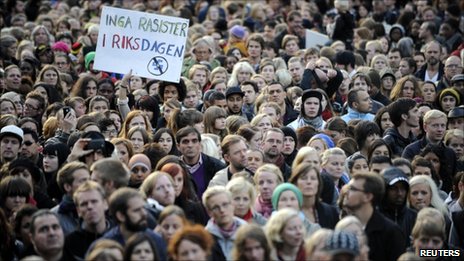 Anti-immingrant bigotry has been a good sale throughout much of Western Europe and the U.S. but Sweden felt immune from this crap since dealing with it in the early 90s.

As the Toronto Star reports, "Swedish leaders lashed out at Scandinavian neighbour Denmark for sharply tightening immigration in 2002, and reacted with horror to the anti-Muslim statements by leaders of the nationalist Danish People’s Party.

"That helped cement Sweden’s reputation as being a haven for immigrants, and was one the reasons the nation of 9.4 million attracted more Iraqi refugees following the U.S. toppling of Saddam Hussein than any other in the West."

When the anti-immigrant party gained a foothold in Parliamentary elections this weekend it came as a shock to many Swedes...and they responded rapidly.

A crowd of around 10,000 people gathered in central Stockholm on Monday evening to demonstrate against racism. The peaceful gathering was spontaneously organised by a 17-year-old girl from the Stockholm suburb of Sollentuna, Felicia Margineanu, who was so disappointed by the election results she posted a protest call on her Facebook page.

The following is from Bloomberg.
SWEDES PROTEST ON STREETS AS ANTI-IMMIGRANTS ENTER PARLIAMENT
About 10,000 people protested in central Stockholm late yesterday while in Gothenburg, Sweden’s second-biggest city, 5,000 took part in a “sorrow march against racism” after the Swedish Democrats got 5.7 percent of votes and their first seats in parliament. About 2,000 protesters gathered in the southern city of Malmoe.Thousands of Swedes demonstrated against the Swedish Democrats as Prime Minister Fredrik Reinfeldt struggles to form a government that doesn’t have to rely on the anti-immigrant party after Sunday’s election.

Protesters waved banners that declared their support for multiculturalism, including placards that said: “Refugees -- welcome!” and “No racists in our parliament.”
Reinfeldt, whose four-party coalition won 49.3 percent, has reached out to the Green Party, part of the three-party opposition bloc, to stop the Swedish Democrats from holding the balance of power. They have so far rejected his overtures. All groups in parliament have said they won’t work with the Swedish Democrats, who want to reduce immigration by 90 percent.
“The banner of tolerance has been hauled down and the forces of darkness have finally also taken the Swedish democracy as a hostage,” Sweden’s Expressen newspaper wrote in an editorial yesterday. “It’s a day of sorrow.”
‘Dismay’
Many Swedes prided themselves on the fact that anti- immigration parties had failed to get into parliament since 1994, in contrast with its Scandinavian neighbors, where the Danish People’s Party and Norway’s Progress Party are among the biggest groupings. Sweden has also criticized Switzerland’s ban on minarets at mosques and France’s deportation of Roma.
“While it’s hard to say that Sweden has woken up to a new self-image, one can say that this is more like a normal European situation and is similar to other western European countries with a proportional election system, where a populist right-wing party has seats in parliament,” said Carl Dahlstroem, a political science professor at Gothenburg University. “It’s the party that is the least liked among other voters, so it is not surprising that people have reacted with dismay.”
While Reinfeldt’s government will probably have to rule as a minority, it is only three seats short of a majority in the 349-member parliament. The ability of the Swedish Democrats to act as kingmakers may be diminished if Reinfeldt finds support among the opposition parties. The Green Party, which shares the government’s stance on business-friendly policies, may back some proposals and Reinfeldt may also find Social Democratic support in other areas, Dahlstroem said.
Minority History
Reinfeldt has a “relatively big” chance of securing a majority once all postal and foreign votes come in, Olle Folke, a political scientist at Columbia University in the U.S., told the Aftonbladet newspaper. The final count will be completed tomorrow, according to the Swedish Election Authority.
Sweden has been ruled by minority governments since the current one-chamber parliamentary system was introduced in 1971, with the exception of six years of majority coalitions starting in 1976, and the last four years under Reinfeldt.
“It is important to remember that a minority government is nothing unusual in a proportional election system and it is actually quite common in Sweden,” said Dahlstroem.
The country’s fiscal laws make it impossible to block a budget bill unless the opposition can muster a majority of lawmakers to back an alternative proposal. The other parties in parliament have said they will shun the Swedish Democrats, which also campaigned on promises to lower aid to foreign countries. It has called Islam the greatest threat to Swedish society since World War II.
Swastikas
In its election advertisement, an old lady with a zimmer frame walking toward a desk to get cash from the authorities is overtaken by a large group of women wearing black burqas pushing their kids in prams. A speaker says voters now have the choice to put the brakes on immigration, or on pensions.
Still, the party has improved its image. While swastikas and Nazi salutes could be seen at its rallies in the 1990s, the party’s leaders now dress in suits and ties and have distanced themselves from the early neo-Nazi roots.
Support for the party was strongest in the Skaane province in the southern tip of Sweden, where it got an average 10 percent of the vote and in neighboring Blekinge, where it got 9.9 percent.
That has angered many Swedes north of the region.
Some people are calling for Skaane to be cut off from the rest of Sweden and handed back to Denmark, where the anti- immigration Danish People’s Party is the third-largest party and has acted as an inspiration for the Swedish Democrats.
Support for the party in the south increased after an influx of immigrants in recent years, riots in immigrant- populated areas in Malmoe and after a Swedish pensioner was killed in a Landskrona parking lot.
It is “time for the Swedes to get themselves a new national self-image” as the election “created a new picture of Sweden,” Svenska Dagbladet daily said after the election in an editorial.
To contact the reporter on this story: Niklas Magnusson in Stockholm atnmagnusson1@bloomberg.net
To contact the editor responsible for this story: Frank Connelly at fconnelly@bloomberg.netTasneem Brogger at tbrogger@bloomberg.net
Posted by Oread Daily at 3:08 PM