CHERNOBYL: IT'LL NEVER BE OVER

The latest scientific studies suggest that the damage to wildlife and fauna continue unabitated in and around the Chernobyl exclusion zone - and far beyond.


In a report in the journal Ecological Indicators, they say they found evidence that radiation contamination has a "significant impact" on biodiversity.

"The truth is that these radiation contamination effects were so large as to be overwhelming," Mousseau said.
Professor Mousseau says the effects are particularly obvious in birds. Barn swallows, for instance, were observed to have tumours on their feet and necks and around their eyes.
Meanwhile, doctors at the Children's Cancer Hospital in Minsk, Belarus and at the Vilne Hospital for Radiological Protection in Eastern Ukraine are telling international media that they are seeing what they have no doubt is a spike in cancer rates, mutations and blood diseases among their patients linked to the world's largest nuclear disaster at Chernobyl
And then there are the radioactive boars in Germany.Boars are among the species most susceptible to long-term consequences of the nuclear catastrophe 24 years ago. Unlike other wild game, boars often feed on mushrooms and truffles which tend to store radioactivity and they plow through the contaminated soil with their snouts, experts say.  As the boar populaton explodes in germany it seems that so does the number of radioactive boars.
And finally there is Marina Sharpanova whose family still resides in an area deathly affected by the radiation.  An article in the Sydney Morning Herald reported on her campaign on behalf of the children still being horribly impacted there thusly: 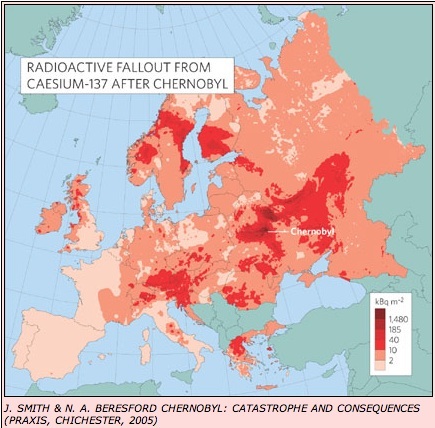 Sharapova grasps the pain of her family history and has read, voraciously, about the impact of the Chernobyl catastrophe.
She is keenly aware that 9000 people around Gomel will die prematurely because of their exposure to radioactive dust, and has not hesitated in her work as an ambassador to the region, on behalf of the United Nations Development Project.
''My dad's family still live here, so there are a lot of people I'm coming back to,'' she says. ''I was too young to appreciate all the details, apart from the fact that there had been a big disaster, but as I grew older I became more interested, wanting to help people who had been affected or been born here.
''Too many people have forgotten about Chernobyl, but I'm determined to remember. I'm trying to help the kids who have been born since, to find a way of their own, to give them perspective.''
Assuredly, the children of the ''Gomel Oblast'', as this area is known, need her care and the money the attention can bring - as she discovers in Chechersk District Hospital, there has been a 1400 per cent increase since the disaster of those being born with thyroid cancer.
The next time someone mentions how clean nuclear power is...ask them if this is what they mean.
The following is from IPS.chernobyl

KIEV, Aug 20, 2010 (IPS) - Almost 25 years after the world’s worst nuclear accident a series of new scientific studies have suggested the effects of the Chernobyl disaster have been underestimated.

Scientists last month published information that, contradicting previous claims, animal populations are declining in the exclusion zone surrounding the site of the former Soviet nuclear power plant, and that radiation contamination effects following the explosion had been "overwhelming".

The German government also reported that compensation payouts made to hunters capturing radioactive wild boar had quadrupled in the last two years as more and more animals were found to have high levels of caesium.

This came just months after doctors in the Ukraine and Belarus said they had seen a rise in cancer rates, mutations and blood diseases in patients they believe are linked to Chernobyl. And a separate U.S. study published in April claimed there had been a rise in birth defects thought to be linked to continuing exposure to low-level radiation doses.

Campaigners against nuclear power say that the studies show that people will be living with the devastating consequences of the disaster for decades, possibly centuries, to come.

Rianne Teule, a campaigner on nuclear issues at Greenpeace, told IPS: "This is a problem that will not go away in a few years, it will be here for hundreds of years to come.

"The new studies confirm that the problems, as presented in 2006 by the World Health Organisation and International Atomic Energy Agency, were really much bigger and will continue to exist and be shown up in other studies. It is not something that is going to go away soon."

When one of the blocks of the Chernobyl nuclear power plant in what is today the Ukraine exploded in April 1986, it caused the world’s worst nuclear disaster. It was estimated that the total radioactivity from Chernobyl was 200 times that of the combined releases from the atomic bombs dropped on Hiroshima and Nagasaki in 1945. The blast and following fires sent a huge radioactive cloud spreading across Europe, and 350,000 people in areas near the plant had to be evacuated.

The United Nations, World Health Organisation, International Atomic Energy Agency and other bodies later joined with the Russian, Belarus and Ukraine governments to set up the ‘Chernobyl Forum’ to undertake a major study into the effects of the disaster, and released their findings in 2006.

Their study claimed that there had been only 56 direct deaths (47 accident workers and nine children with thyroid cancer), and estimated a future 4,000 deaths due to the accident.

But the report was heavily criticised by other groups who said it grossly underestimated the deaths and potential future health effects of the disaster and had used selective reporting of data.

Some questioned the stance of the IAEA, which has backed the use of civil nuclear power for decades.

Alternative studies contradicted some of the Chernobyl Forum findings and suggested the health effects of the disaster had been much greater. One, the 2006-published TORCH report by British scientists Ian Fairlie and David Sumner which was commissioned by a German Green Party MEP, pointed out the uncertainty surrounding the health effects of low doses of radiation and of internal radiation doses through ingestion. It also said that amounts of some radioactive particles released into the environment were underestimated by as much as 30 percent.

Official figures from the countries worst affected by the initial accident – Belarus, Ukraine and Russia – also contradict the report’s findings.

The United Nations’ International Agency for Research on Cancer has said that there are more likely to be 16,000 deaths from Chernobyl while the Russian academy of sciences claims that to date there have been at least 140,000 deaths in Ukraine and Belarus and 60,000 in Russia. The Ukrainian national commission for radiation puts the figure much higher at 500,000.

Doctors in the Ukraine and Belarus told Ukrainian media earlier this year that there has been a recent rise in cancers, infant mortality and other instances they are convinced is caused by the continuing effects of the catastrophe.

Oksana Kostikova of the Children’s Cancer Hospital in Minsk said: "These figures cited by the WHO and the IAEA don’t even match with figures other UN organisations are predicting in terms of cancer deaths," adding that 16,000 deaths from Chernobyl predicted by the International Agency for Research on Cancer was "a more accurate assessment of what we see daily."

At the time critics attacked a statement in the Chernobyl Forum’s report that there was no evidence of an increased risk of birth defects in areas contaminated by the accident. And Dr Wertelecki says that the Forum’s findings need to be re-examined and comprehensive studies undertaken to gain a true picture of the health effects of the catastrophe.

He told IPS: "The official position is that Chernobyl and birth defects are not connected. That position needs to be reconsidered at the very least."

The same call has been backed by groups like the UK Chernobyl Children's Project, which helps affected children. It has said women in the Ukraine and Belarus are still giving birth to children with disabilities and genetic disorders but that no comprehensive research on this is being carried out.

WHO and IAEA officials continue to back their findings in the Chernobyl Forum report. The IAEA has also suggested that many illnesses claimed to be linked to Chernobyl were in fact down to stress brought on by radiophobia – a fear of radiation -- or poverty and unhealthy lifestyles.

But anti-nuclear power campaigners say international organisations such as the WHO and individual governments have an important role to play in ensuring the consequences of the disaster are examined in full and the public are protected.

Greenpeace’s Teule told IPS: "Outside the exclusion zone there are still areas that are highly contaminated but publicly accessible. Also, as seen with the wild boar being contaminated in Germany, there is still radiation in wild berries and other wild food which could be eaten by humans. More could be done to protect the public.

"There is also a role for the WHO to oversee a comprehensive international study of all the data."
Posted by Oread Daily at 3:17 PM