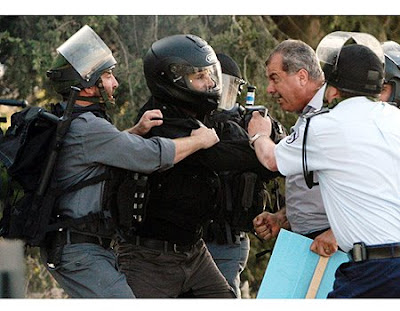 As Lebanon erupts into civil war, to the south the state of Israel was marking its 60th birthday today. While Israel celebrated the anniversary of its creation, the Arab world mourned the displacement of the Palestinians - referred to as the "Nakba," or catastrophe.

Nearly 2,000 Arab Israelis marked the "catastrophe" that befell them with the establishment of Israel in 1948. The main event of the day for them took place atop the ruins of Tzipori, an Arab town in the Galilee which was destroyed in 1948. There demonstrators led a procession in which some of the participants chanted "Palestine is Arab from the sea to the river," and "Zionists out!"

The march, traditionally marking the expulsion of Palestinian refugees from their land during the War of Independence, led protesters from Nazareth towards the deserted ruins of the village of Suffurriye – today's Zippori.

Among those injured was Balad’s MK Wasil Taha who told Y Net News how he was hurt, “It all happened when I tried to send the police away and calm the situation down. I saw a police officer in civilian clothing…He hit me three times on the head. They evacuated me to hospital. ..There were also provocations by the (Israeli) rightists, but the police did nothing to stop them.”

Hadash Chairman MK Mohammad Barakeh said that the riots were caused because the police did allow the rally-goers to properly disperse.

Barakeh said, “The police was nasty to the demonstrators, expecting them to simply vanish. I condemn the police’s behavior. The event was perfectly organized, only the police prepared itself for provocation against the mass.”

Israeli Northern Region District Commander Shimon Koren blamed the Palestinians,“When the rally was granted permission its organizers gave their explicit obligation to avoid provocation. Unfortunately, the organizers were not able to control the wild incitement."

According to him, the riots began when the If You Will group, Israel’s largest volunteer student and young adult movement, who was picnicking across the road, raised the Israeli Flag. The participants asked them to lower the flag and the two sides began to exchange words that led to a violent clash.

In other activities, Palestinian and black flags were raised on roof tops of buildings, a partial public strike was conducted by Israeli Arabs and demonstrations took place across the occupied territories.

At least 700 Palestinians from the southern West Bank district marched side by side next to the largest key in the world to mark the 60th anniversary of the Nakba. The event, which was organized by the Palestinian Committee for commemorating the 60th Nakba year, started at around midday from the Duhyisha Refugee camp located in the southern part of Bethlehem. The rally and march was lead by a truck carrying the largest key in the world, representing the Palestinian refugees displace in 1948 by the creation of the Israeli state.

The 700 strong march, reports Palestine Today, continued through Al Azah refugee camp then to Ayidah refugee camp where the key was installed on a concrete gate.

Palestinian Prime Minister Salam Fayyad was among the dignitaries who attended the inauguration of a tented "camp of return" in the West Bank town of Ramallah today. The exhibit features displays of photographs and documents dating back to the 1948 creation of Israel which turned hundreds of thousands of people into refugees.

In a statement issued today, the National Committee for Commemorating the Nakba called for all Palestinians to participate in protest actions at " the celebrations by the state of occupation [Israel] at its establishment on the remains of Palestinian cities and villages by expressing the clinging of the Palestinians of their 'Right of Return' which is a legitimate right."

The cultural centre of the village of Beit A'nan and a number of other organizations in the area of north west of Jerusalem will organize a rally on Friday afternoon. More than 500 children will participate, each wearing a uniform carrying banners, keys and Palestinian flags under the slogan " so that we will not live the Nakba twice."

The rally will set out from a local school in the nearby village of Beit Ijza to the adjacent village of Bedu, where a festival will be held commemorating the Nakba.

Meanwhile, the Palestinian News Network has reported that the Israeli military closed the Beit Iba Checkpoint “until further notice.” The western Nablus checkpoint is a central passing point for Palestinians moving between cities in the northern West Bank.

The Israeli authorities attributed the closure of the checkpoint to the visit of hundreds of Israeli settlers to the settlement of Shaveh Shomron.

It was vacated by the Israeli army for more than two years. But now it is being reopened for the Israeli 60 year celebrations.

Hundreds of Israeli soldier have been deployed in western Nablus, in addition to closing several roads. Flying checkpoints are now commonplace throughout the entire area. Hundreds of Palestinians and their vehicles are being detained and inspected.

As Palestinians remembered what happened to them six decades ago, hundreds of thousands of Israelis took to the streets and parks across Israel Thursday to celebrate the 60th independence day of the state of Israel. Across the country, during the day, after a night of fireworks and free entertainment in town centers, Israelis were out on family picnics in national parks and nature spots and visited open military installations and historical sites, museums and galleries. Air force aerobatics roared overhead up and down the country with no further incident, and the Navy put on a show opposite the beaches. Blue and white flags festooned many buildings and cars.

There were carnival events for children and in Haifa the Israeli army band marched with eight visiting military ensembles. Police leaves were cancelled after the receipt of 12 tip-offs of threatened terrorist attacks, especially in Jerusalem, where an array of foreign dignitaries attended state events.

High points of national history – tragic and joyous - were retold in radio and television programs and live interviews throughout the holiday.

Overseen by Knesset Speaker Dalia Itzik, members of the Israeli security forces raised the national flag from half to full mast, marking the end of Memorial Day for fallen soldiers and terror victims and the beginning of Independence Day in Jerusalem.

Thousands of other Israelis celebrated Independence Day by flocking to hilltop communities in Judea and Samaria (also known as the occupied territories) for a day of song and solidarity with settlers there.

For example, at least 2,000 people held picnics, barbecues and hikes at the settler community of Migron. They gathered at the mountaintop site to express their support for Israeli sovereignty in the region.

Participants streamed to the hilltop under the banner of, “We stand up for what’s ours – Migron!” According to Ynet, the IDF and police officially permitted the event.

While Israel was born on May 15 and that is the traditional date for Nakba, because the Jewish Calendar makes today Israel Independence day "both sides" were out doing what they were doing.

The following is from Haaretz.

Nearly a dozen people were injured on Thursday, including five police officers and two Israeli Arab Knesset members, in clashes that erupted at a demostration in the north marking the 60th Naqba Day, as Palestinians refer to Israel's Independence Day.

The clashes broke out at a demonstration in Kfar Safuriyah, near Nazareth. As the event was coming to a close, a group of youths gathered on Route 70 where a group of rightists were holding a counter-protest.

Police had blocked off the highway to prevent clashes between the two groups. A fight then broke out between police and dozens of the Israeli Arab youths.

According to Jezreel Valley police, officers used stun grenades to disperse the crowd.

Six protesters were also hurt, including Balad MK Wasel Taha, who sustained light head injuries and MK Mohammed Barakeh, who was struck in his legs during the demonstration.

More than a 1,000 people gathered at the demonstration on Thursday, including leaders of the Higher Arab Monitoring Committee, members of Knesset, Israeli Arab political leaders and social justice groups.

In Bethlehem, villagers marched with a huge key, to symbolize the hope of
refugees to return to their now-leveled villages in Israel. In
Nablus, people flew kites emblazoned with return. The 1948 refugees and their descendants number around 4.5 million and are scattered across the region
Posted by Oread Daily at 2:51 PM