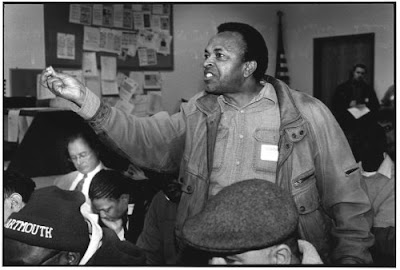 The following is from Phili IMC.

WHAT: Philadelphia Parking Authority Public Hearing
WHERE: Philadelphia Convention Center (12th and Arch St.) Rm. 108B
WHEN: Thursday, May 8 - 9AM-12PM

During these times of exorbitant fuel prices, the Taxi Workers Alliance (TWA) is strongly opposing 21-pages of newly imposed fines, fees and regulations the Philadelphia Parking Authority (PPA) is proposing at a public hearing tomorrow. The new fines and regulations will make it impossible for cabbies to feed and clothe their families forcing TWA and taxi drivers to seriously consider a citywide strike.

One example of a new fine the PPA is attempting to levy on drivers: A $525 fee for drivers who are either forced or choose to change radio dispatch companies. This completely new fee is added on top of the existing costs of changing companies which average $500. It is important to note that while the PPA incurs no costs when a driver changes companies, this $525 would go directly into the PPA's coffers. And, as recent news reports have shown, the PPA has not lived up to it's promise of using this money to aid the schools or vital services of the city.

Under the newly proposed rules taxi drivers will also be forced to make dispatch pick-ups regardless of where a fare is and how far that fare is going. This may seem reasonable, but it often means a cab driver in the NorthEast will be called to pick up a passenger in South Philly who is only going a few blocks. This does not make sense for consumers or for drivers, and with high gas prices drivers actually lose money on these jobs.

At the same time, in June the PPA will implement meter increases against drivers' wishes; costing passengers more money and hurting drivers' business. The PPA is using these increases to justify the new fees on drivers.

As Philadelphians are feeling the pain at the pump, imagine how rising gas prices are affecting cab drivers. Because of the seriousness of the situation, TWA calls on the community to join us on Thursday morning, as members of the taxi industry comment on the new proposals at a public hearing convened by the PPA. The PPA made these new proposals, it is holding this public hearing, and the PPA board will make the ultimate decision. While this is an opportunity for drivers to voice their opinions, it is questionable if their voices will be heard, unless it is clear to the PPA that Philadelphians are closely watching how they treat the hard workers of the city.
TWA Leader Tekle Gebremedhin is pictured above challenging the PPA in a photo taken by Photo by Harvey Finkle,
Posted by Oread Daily at 5:34 PM

Thank you so much for sharing this informative post.. Stay blessed!!
PHL Airport Taxi