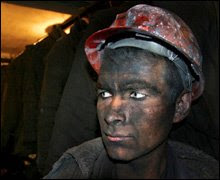 In Russia’s Sverdlovsk Region, a ten-day sit-in strike by 96 bauxite miners 800 metres below ground ended last Friday. The strike began on the evening of March 26, when, according to a local mine union source, 107 miners completing the night shift refused to leave the mine. Twenty-four hours later, they sent up their demands. They launched a hunger strike on April 1 and again refused to come to the surface until their demands, including funding for the construction of another mine, were met. Workers also demanded the restoration of previously suspended parts of the their welfare packages

The world’s largest aluminium producer – United Company RusAl – has now agreed to amnesty for all involved and pledged to meet the strikers demands.

The International Federation of Chemical, Energy, Mine and General Workers' Unions (ICEM) reports the company, privately-owned by Russian oligarch Oleg Deripaska, shut five other bauxite mines in the North Ural Mountains on 28 March, curtailing wages for 5,000 other miners in an effort to divide miners and pressure the striking union. That failed, with members of the other unions signing pledges of support for the strikers, as well as sending food and other supplies to them, until they started the hunger strike.

An annual pay increase put in place late last year for all the unionised miners of the region by RusAl paled next to the company’s vast profits and the 15% inflation rate of the region. The strikers of the Independent Miners’ Union sent a list of ten demands to the surface. Those demands included a 50% pay increase on top of the average salary of US$760 per month, an end to weekend work, resumption of a company halted social welfare programme that took effect 1 January, and investment in other mines of the region.

The blog Dance with Bears points out this was the first organized action by miners against a Russian metals oligarch for a share in the wealth he has been accumulating in the current commodity boom. It is also the first challenge by an independent miners’ union to overwhelm resistance from the company-favoured unions. The Independent Miners’ Union of Russia which led the strike is one of four unions at the mine. The larger unions at the mine began by officially denouncing the smaller union’s strike as illegal.

Local press reports said that the wildcatters were backed by other miners, and most of the population of a nearby town, who came out for a solidarity rally.

The following is from libcom.org.

After over a week of occupation of a mine shaft, the Russian miners returned to the surface, with the promise of compromise on key wage demands and the restoration of social programmes.

The occupation began on March 26th, with the workers producing a list of 11 demands including a 50% wage increase, and the restoration of previously suspended parts of the workers welfare packages. The occupation was part of a strike by 3000 workers against Severuralsk - part of the Rusal group, under the control of Oleg Deripaska, one of Russia’s richest Oligarchs, and is the first strike by unionised workers against Rusal.

While initially responding aggressively and threatening legal action against the occupation it claimed was illegal, Rusal backed down as all 5 shafts in the mine were shut down by workers. Attempts to bring in police were suspended, and negotiations have begun between Rusal and representatives of both unions involved. Demands for the restoration of certain social programmes have already been accepted, and wage increases of over 20% are anticipated.

The strike has attracted significant attention and sympathy from across Russia, as well as active solidarity from other unions and residents of the local town.
Posted by Oread Daily at 5:18 PM

Thank you for that interesting, inspiring report.