HAITIANS TAKE TO THE STREETS IN CRY AGAINST HUNGER 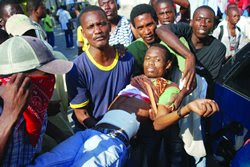 Witnesses said at least one person was killed by hotel security guards during a protest in the southern city of Les Cayes, where at least four people died last week in food riots and clashes with U.N. peacekeepers.

AFP says early today protesters crowded against the fence around the presidential palace throwing rocks toward the building guarded by police, on the second consecutive day of demonstrations in and around Port-au-Prince and six days after unrest first erupted in the city of Cayes.

The web site "We Haitians United We Stand For Democracy" reports thousands of people marched mostly peacefully past the National Palace in Port-au-Prince. "We're hungry," some called out. Others carried posters reading "Down with the expensive life!"

Some protesters threw chairs against buildings and shouted for the U.N. troops to leave the country, blaming them for the high price of rice.

By midday the whitewashed palace was completely blocked off as a dozen armored vehicles manned by Brazilian soldiers under the UN Minustah peacekeeping mission took position around the compound.

Witnesses said there was gunfire and that scuffles broke out with UN soldiers.

In other areas of the capital, barricades were erected on the streets.

"Living conditions are horrible. We are tired of hearing promises, we want fast action," said a protester named Wilson, 25.

Haitians are particularly affected by food prices that are rising worldwide. Eighty percent of the population lives on less than $2 a day.

"Some can't take the hunger anymore," the Rev. Gerard Jean-Juste told The Associated Press. "As a priest, I encourage all government officials to do their best to find ways to solve the near-famine situation."

The protests began after a sudden jump in prices for fuel and basic food commodities in the poor country of 8.5 million.

The cost of staples such as rice, beans, fruit and condensed milk has gone up 50 percent in the past year. Gasoline has seen its third price hike in less than two months.

Hedi Annabi, UN special envoy to the country said the UN was there to support the government. He later told reporters, however, that there was a need "for urgent assistance to alleviate the suffering of the population".

"...people can’t buy food. Gasoline prices are going up. It is very hard for us over here. The cost of living is the biggest worry for us, no peace in stomach means no peace in the mind. Although, many can’t pay taxi or tap-tap fares just from Delmas to the downtown of Port-Au-Prince, I wonder if others will be able to survive the days ahead because things are very, very hard. It is imperative that the government reopen food banks to save lives. In 2003 they had food banks in the popular districts. Now they are closed. The government must reopen them if they don't want people to die."

What is happening in Haiti is not and will not be unique.

The head of the United Nations World Food Program warned on Monday that a global surge in food prices could lead to further tensions.

"A new face of hunger is emerging; even where food is available on the shelves, there are now more and more people who simply cannot afford it," WFP director Josette Sheeran said in a statement.

The following is from Caribbean Net News.

A man was killed by gunfire as demonstrators took to the streets in the southern Haitian city of Les Cayes on Monday, raising the death toll to five in protests against rising food prices, officials and radio reports said.

Protesters also marched outside the National Palace in Port-au-Prince, the capital of the impoverished Caribbean nation of nearly 9 million people, expressing anger at the higher cost of food.

Four people were killed and 20 others were hurt in a riot in Les Cayes last week. UN vehicles were burned, peacekeepers were attacked and a food warehouse was looted by angry mobs on Thursday and Friday.

In response to the unrest, Prime Minister Jacques Edouard Alexis announced a multimillion-dollar investment program aimed at lowering the cost of living.


Haitians protest the high cost of living in front of the Haitian Parliament in Port-au-Prince. AFP PHOTO
Prices of rice and other essentials have doubled and in some cases tripled, sparking protests since Wednesday in Gonaives, Petit-Goave and other cities against the government of President Rene Preval, whose 2006 election brought relative calm after decades of violence and political upheaval.

"A new face of hunger is emerging; even where food is available on the shelves, there are now more and more people who simply cannot afford it," WFP director Josette Sheeran said in a statement.

Tensions remained high in Les Cayes, one of Haiti's largest cities. Gunfire erupted on Monday when protesters tried to storm the home of a senator, Gabriel Fortune, and two men were wounded, according to a city official.

One of the men died later at a hospital, he said.

"The government is solely responsible for what is happening today because it has failed to properly address the problems," resident Maxon Benoit said on Sunday. "Why don't they eliminate taxes on food products and give the population a break?"

Les Cayes Mayor Pierre Yvon Chery was attacked on Sunday by angry protesters when he went to the seaside neighborhood of La Savane to explain measures enacted by the government to help calm the unrest.

Residents said the violence was the worst Les Cayes had seen in years.

"This is a shame for us, inhabitants of this city known for its calm, its hospitality and its civility," said 45-year-old Marie Jeanne Occeant. "It is true the situation is unbearable. I have not seen such hardships my whole life, but the violence can only make it worse."

Over the weekend, UN and Haitian security forces helped clean streets in Les Cayes, where barricades of burning tires and the shells of wrecked cars were erected.

"We have reinforced our police contingents with specialized units from Port-au-Prince and a new battalion of Brazilian troops has also arrived in support," said Henriot Toussaint, police chief for the southern region. "We have the situation under control."
Posted by Oread Daily at 2:05 PM