THE LAWSON FILE: GUEST WORKER PROGRAM NOTHING TO BE PROUD OF 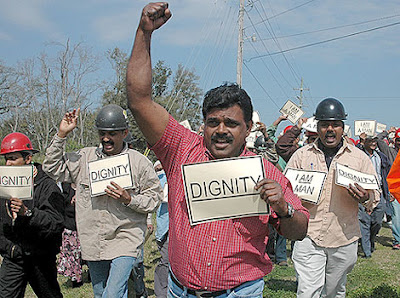 Chidanand Rajghatta writes in the Times of India today that hundreds of Indian workers caught in a human trafficking racket have asked the Indian government to protect their families in India from vengeful recruiters even as they filed a class action anti-racketeering lawsuit in the US against their American employer.

More than 100 the Indian guest workers at Signal International quit their jobs Thursday along the gulf coast, in protest and despair. It's been a year since hundreds of workers protested outside the offices of Signal International about the conditions they faced. Nothing changed.

Sometime in 2006, scores of welders and pipefitters from India responded to a series of advertisement placed by a recruiting company run by Mumbai-based Sachin Dewan promising green cards and permanent residency in the US. Over 600 workers from all around India and some from the Gulf paid Dewan up to Rs 10 lakh (about $ 25,000 in today’s rates), often selling their homes and raising loans, for the promised “American dream”.

When they arrived in US, they discovered that there were no green cards. Instead, the workers found themselves working for Signal International, a major marine construction company, on ten-month “H-2B’’ visa that bonded them to work for it.

The Ministry Of Overseas Indian Affairs has in response initiated an inquiry against two agents who had recruited workers for the Signal International shipyard in the US after the laborers quit the firm accusing it of exploiting them.

“We will present evidence that Signal International and recruiters in both countries conspired to exploit hundreds of Indians in a labor trafficking scheme,” said Sabulal Vijayan, a former employee of Signal and one of the rebelling workers' leaders, in a press release issued by Stephen Boykewich of New Orleans Worker Justice Coalition (NOWJC). “We also want (Overseas Indian Affairs Minister Vayalar) Ravi to direct Dewan (Dewan Consultants of Mumbai) and his associates to refrain from contacting the workers' families in India and intimidating them,” Vijayan added.

About 100 workers, supported by NOWJC, quit their jobs in Mississippi last Wednesday to protest their abysmal living conditions. Some 200 other Indians are still working under similar conditions at the Pascagoula shipyard. “They perhaps don't want to risk leaving at this stage, but will be welcome to join the action that other workers are planning,” Boykewich said.

Saket Soni, director of the NOWJC said the Indian workers lived “like pigs in a cage” in a company-run “work camp.”

One of the workers, Rajan Pazhambalakode, added, “I’ve been a guest worker all my life. I've never seen these kinds of conditions. We stayed 24 people to a room, for which the company deducted $1,050 a month from our pay cheques.”

The nature of their visas prevented them from working for any other company, leaving the constant threat of deportation hanging over their heads.

The workers were recruited by Dewan Consultants of Mumbai, and brought by Signal to the US over a year ago and made to live and work in abysmal conditions. “The workers demand the US to prosecute Signal for human trafficking and the Indian government to punish recruiter Sachin Dewan,” Soni, told the Indian media.

The NOWJC says by some estimates, close to 100,000 new migrant workers--Latino, African-American, Asian, Native-American, and Anglo workers either recruited to the reconstruction zones or searching on their own for better economic opportunities-- arrived in the Gulf Coast region after Hurricanes Katrina and Rita. NOWJC says those who came to help rebuild New Orleans like those in Mississippi got the shaft.

"Instead of being validated and rewarded for their role in this city's renewal, they find themselves locked into states of marginalization and transience. Across the city, workers are living in abandoned cars, working in toxic conditions, chasing after a web of subcontractors for their wages, and running from police and immigration authorities who have intensified their enforcement efforts while labor law enforcement is lax."

You can't tell me this is something most ordinary Americans ever even hear about. They would be outraged if they did. Those Americans want to be proud of their country, but come on, this is the sort of thing that takes away from their pride.

The Rush Limbaughs of the world would probably somehow make this into an anti-immigrant story instead of the corporate greed one which it obviously is.

But forget those anti-immigrant extremist for now. You tell me, do you believe hard working Americans think what happened to David Kurien is defensible.

Kurien, who hails from Kochi, was working in the Gulf when he saw newspaper advertisements from the recruitment firm.

He realised he was cheated when he reached the U.S. in 2006. He had been issued a H2B visa, which had only a 10-month validity. The visa, issued to “guest workers,” also bound him to the terms set by his employer.

Kurien said that for two years he has shared a 28-square meter room with 25 others. “If one of us caught fever, every one else had it in no time.” The workers had no access to health care and had to spend for medicines from their own pocket.

Food was bad and toilet facilities were inadequate. “To report for work at 6 a.m., I had to stand in queue before the toilet at least by 4 a.m. There were only two toilets for 30 people,” he said.

The company charged each worker Rs. 1,500 every day for frugal rice-based meals. The food lacked protein, which was essential for surviving in the cold clime, he said.

When workers complained about the food, a company official said the fare “was good enough for Indians.”

The situation was so despairing that many workers contemplated suicide, while one slashed his wrists. The conditions in the camp were “jail like and there was no freedom,” Kuren said.

Most Americans think this sort of thing ended back in the late 1800s.

Believe it or not Signal International is still recruiting Indians for work through another agent in Mumbai.

Signal International, LLC, is one of the largest marine and fabrication companies in the Gulf of Mexico providing repair, upgrade, new construction and fabrication services to the offshore and marine industry. Headquartered in Mobile, Alabama, Signal currently employs over 3,000 workers in its six production facilities, two in Mississippi and four in Texas.

The company denies all the allegations and says everything is just fine.

And while you're digesting all this keep in mind all those proponents of guest worker programs across the political spectrum. Pretty much every politicians votes and stances regarding the "guest worker program" have been anything but clear.

But whatever, the case may be, any guest worker program had better include clear guidelines for the treatment of those who get to be our guests. What is happening today along the gulf coast is not something unusual.

As SPLC Immigrant Justice Project Director Mary Bauer points out,"Guestworkers are usually poor people who are lured here by the promise of decent jobs. But all too often, their dreams are based on lies, their hopes shattered by the reality of a system that treats them as commodities. They're the disposable workers of the global economy."

The following is from the Houston Chronicle.

NEW ORLEANS — A group of workers from India who claim they were duped into taking jobs at Gulf Coast shipyards and subjected to abusive living conditions are suing the company that hired them in the aftermath of Hurricane Katrina.

A class-action lawsuit filed last Friday in federal court accuses Signal International, an oil rig construction and repair company, of exploiting and defrauding more than 500 Indian nationals who worked at its facilities in Pascagoula, Miss., and Orange, Texas.

Several dozen former workers staged a protest Monday outside the New Orleans office of a lawyer who allegedly helped recruit them to work for Pascagoula-based Signal as welders, pipefitters and other jobs through a federal guest worker program.

The workers claim they were lured here by the false promise of green cards and permanent U.S. residency. Some say they didn't know their work visas would last less than a year until after they paid thousands of dollars on travel and other expenses.

In their lawsuit, the workers also accuse Signal of subjecting them to "psychological coercion," threats of deportation and overcrowded living quarters.

"These workers mortgaged their futures for the American dream and instead incurred substantial debt, were forced to live in squalid living conditions and were threatened with (deportation) when they tried to stand up for their rights," said Jennifer Rosenbaum, a lawyer for the Southern Poverty Law Center.

In an unsigned statement, the company denied the workers' allegations as "baseless and unfounded" and said most guest workers have been satisfied with their employment and living conditions.

Federal officials have reviewed Signal's employment practices, inspected its facilities and deemed them fully compliant with the law, the company added.

"Signal respects the right of its former employees to demonstrate but maintains that the allegations being made against Signal, its employment practices and housing complex conditions are simply untrue," the company said.

Sabulal Vijayan, one of 12 former workers named as plaintiffs in the suit, said he gave up a job in the United Arab Emirates to work for Signal and didn't know his work visa would expire 10 months after his arrival in December 2006.

Vijayan says he attempted suicide after Signal allegedly threatened to deport him in retaliation for complaining about the working conditions in Pascagoula.

"We are saying this is ... modern-day slavery," said Vijayan, a native of the Indian state of Kerala.

Rosenbaum said a shortage of skilled labor after hurricanes Katrina and Rita in 2005 has left many Gulf Coast companies relying on guest workers. Some use the program to "undercut job quality and exploit foreign labor," she alleged.

Some of the same lawyers who represent the Indian workers also filed suit in August 2006 against Decatur Hotels, accusing the New Orleans hotel chain of violating the rights of guest workers from Bolivia, Peru and the Dominican Republic, whom it hired after Katrina.

A spokesman for U.S. Rep. George Miller, D-Calif., who chairs the House Education and Labor Committee, said in a statement that the congressman is "monitoring the situation in Mississippi."

Lawyers for the workers are asking a federal judge in New Orleans to certify the lawsuit as a class action. The suit accuses Signal and its recruiters of violating the Racketeer Influenced and Corrupt Organizations Act and the Victims of Trafficking and Violence Protection Act.

Also named as a defendant in the suit is New Orleans lawyer Malvern Burnett, who is identified as a "legal facilitator" for Signal. More than 50 protesters gathered outside Burnett's office Monday, chanting and holding signs that said, "Dignity" and "I Am a Man."

Malvern didn't immediately respond to a message left at his office.
Posted by Oread Daily at 4:18 PM

Rosenbaum and the Southern Poverty Law Center are only hurting the foreign laborers. They are forcing companies to stop using guest worker programs out of fear of senseless lawsuits.