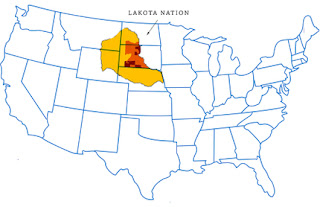 As you should have heard somewhere by now a group of Lakota Sioux Indian representatives from various reservations and states said yesterday that it is declaring sovereign nation status and withdrawing from all treaties with the U.S. government.

A press release from the group stated in part:

"The withdrawal, hand delivered to Daniel Turner, Deputy Director of Public Liaison at the State Department, immediately and irrevocably ends all agreements between the Lakota Sioux Nation of Indians and the United States Government outlined in the 1851 and 1868 Treaties at Fort Laramie Wyoming."

"This is an historic day for our Lakota people," declared Russell Means, Itacan of Lakota. "United States colonial rule is at its end!"

"Today is a historic day and our forefathers speak through us. Our Forefathers made the treaties in good faith with the sacred Canupa and with the knowledge of the Great Spirit," shared Garry Rowland from Wounded Knee. "They never honored the treaties, that's the reason we are here today."

"...The Lakota reservations are among the most impoverished areas in North America, a shameful legacy of broken treaties and apartheid policies. Lakota has the highest death rate in the United States and Lakota men have the lowest life expectancy of any nation on earth, excluding AIDS, at approximately 44 years. Lakota infant mortality rate is five times the United States average and teen suicide rates 150% more than national average. 97% of Lakota people live below the poverty line and unemployment hovers near 85%."

"After 150 years of colonial enforcement, when you back people into a corner there is only one alternative," emphasized Duane Martin Sr. "The only alternative is to bring freedom into its existence by taking it back to the love of freedom, to our lifeway."

"We are now a free country and independent of the United States of America," Means said in a telephone interview with the Rapid City Journal. "This is all completely legal."

Means said a Lakota delegation on Monday delivered a statement of "unilateral withdrawal" from the United States to the U.S. State Department in Washington.

The State Department did not respond. "That'll take some time," Means said.

The move to form an independent nation will focus on property rights in a five-state area where the treaties in question were drawn up. The states include South Dakota, North Dakota, Nebraska, Wyoming and Montana – areas that the group say have been illegally homesteaded for years despite knowledge of Lakota as the historic owners. Lakota representatives say if the United States does not enter into immediate diplomatic negotiations, liens will be filed on real estate transactions in the five state region, clouding title over literally thousands of square miles of land and property.

“In order to stop the continuous taking of our resources – people, land, water and children- we have no choice but to claim our own destiny,” Phyllis Young, a former Indigenous representative to the United Nations and representative from Standing Rock, said.

Young added, “The actions of Lakota are not intended to embarrass the United States but to simply save the lives of our people.”

The group has been meeting all week with foreign leaders in an effort to gain political support for sovereign nation status, including Bolivia Indigenous President Evo Morales. Morales said his country is “very, very interested in the Lakota case.”

The following is written by and from the web site of Kathryn A. Graham .

In an incredible irony, the very people that the United States have most oppressed throughout our history may hold the key to freedom for all of us.

Few Americans remember the siege at Wounded Knee in the mid-1970s, but perhaps they should. Members of the AIM, or the American Indian Movement, occupied parts of Pine Ridge in protest over the brutal killings of two of their own, the disgustingly mild prosecutions for those murders, and the beating of the mother of one of those two when she attempted to seek justice from the U.S. government. The AIM were seeking their rights under U.S. law and for the U.S. government to honor treaties with the American Indian that had been ignored for more than a century. It was a lawful - and a peaceful until attacked - protest.

In response, the FBI fired almost 200,000 rounds at the protesters (the protesters did fire weapons in their own defense, but only over their attackers' heads) in an illegal show of force that betrayed every ideal of real freedom. The siege at Wounded Knee lasted 71 days. This was Waco decades before Waco, largely ignored by the U.S. population due to media indifference and the fact that the victims were not white Americans.

Later, the defense team for Russell Means and Dennis Banks was infiltrated by a government informant, which led to perjured testimony and a very angry judge who stated that the government was more interested in convictions than in justice. South Dakota Judge Nichols was quoted as saying, "It's hard for me to believe that the FBI, which I have revered for so long, has stooped so low," and dismissed all charges against the defendants.

Apparently, all those years ago, at least a portion of our justice system still operated as it was designed to do.

Leonard Peltier was not so lucky. He was tried in North Dakota, and was sentenced to two consecutive life sentences in prison. He remains there today, even though evidence recovered after the siege clearly showed that the two FBI deaths were attributable to friendly fire. During his years in prison, through his art and letters, Peltier has continued to work for oppressed people everywhere.

Russell Means has remained free, and he has not been idle in the intervening decades. A committed libertarian, he has written several books, run for office on the Libertarian ticket, and continued to pursue a film career that has made him a household face and name. Apart from that, he has bided his time, waiting for just the right moment in history.

That moment has come. In September of this year, the United Nations passed a non-binding Resolution on the Rights of Indigenous Peoples. Naturally, Canada, the United States and Australia refused to sign, but this resolution paved the way for a move that has been waiting in the wings, so to speak, since the 1970s.

On Wednesday of this week, Russell Means led a delegation of the Lakota Sioux people to the U.S. State Department and the embassies of Bolivia, Chile, South Africa and Venezuela, declaring their secession from the United States of America.

Means stated, "We are no longer citizens of the United States of America and all those who live in the five-state area that encompasses our country are free to join us." The lands of the Lakota Sioux encompass portions of Nebraska, North Dakota, South Dakota, Wyoming and Montana. In the coming weeks, they will take their diplomatic mission overseas to seek further support.

Means also stated that anyone willing to renounce their U.S. citizenship would live on Lakota land tax free, and that the Lakota would issue their own passports and driving licenses. Since a large group of libertarians have recently moved to Wyoming, this opens up some interesting possibilities for a free society growing up right in our midst.

The coming road will not be an easy one. I cannot see the U.S. neo-conservatives leaving this alone. I imagine that there will be another bloody and vicious siege taking place on Lakota land, but I also believe that Means has timed his move correctly. If this happens as I fear it will, the neo-conservatives will be the clear authors of their own destruction. The American people have had enough!

You go, Russell!! You are the bravest and best of us, and the sanest and best of America stands with you in the trials you will face over the coming months and years.
Posted by Oread Daily at 3:14 PM