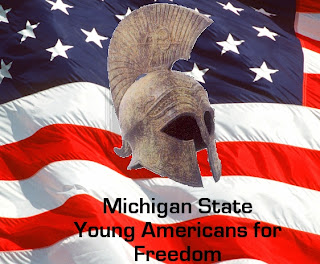 "YAF is the Nation's oldest, largest, and most active conservative youth organization. Founded in 1960 at the Sharon, Connecticut estate of William F. Buckley, Jr., YAF has long fought for the values that made America great – individual liberty and political, social, and economic freedom."

The MSU chapter of Young Americans for freedom has been active since 2001 and has risen to be one of the most active YAF groups in the country. And that's what YAF is all about – being active. Activism is the base of our group. Whether it's organizing a counter-demonstration, bringing a conservative speaker to campus, or rallying students against left-wing university policies, we're always being active. We've been described as the "green berets" of the conservative movement, always out on the front battling the left wherever they are.
-----Web Site of the Michigan State Young Americans for Freedom

The zany right wing student group known as the Young Americans for Freedom or more affectionately Yaffers have invited British fascist Nick Griffin of the British National Party to come to campus and give a little talk on the issue of how Europe is rapidly becoming Eurabia. He will be speaking on October 26, from 7 to 9 p.m.

Locals in the area might take note of what happened when old Nick turned up for a speech in his own country earlier this week.

Over 100 anti-fascists turned out on Tuesday evening. The assembled trade unionists, socialists and members of the local community gathered outside Kimberley Parish Hall trapping Griffin and a handful of supporters inside. The protest was sufficiently large and well organized to prevent a planned 'mass-meeting' of BNP supporters from taking place. This was described by some as a major set-back for the BNP in the region and a huge victory for all those who oppose their fascist race-hate.

"A stand-off between protesters and the police lasted well over two hours after initial attempts to break our lines were thwarted. The police made a number of heavy-handed attempts to intimidate the protest - all of which failed. A small number of protesters have been detained by the police. Notts Stop the BNP will monitor the situation and support those involved.

At the end of the evening Griffin and his close associate Sadie Graham (BNP councillor for Brinsley, Broxtowe) were driven away with police protection after a small number of very disheartened supporters on the outside gave up their token vigil."

"Nick Griffin and the British National Party have a problem with democracy. It is an alien concept to fascism and one that is regularly derided in party literature and speeches. After all, it was Griffin who once wrote that power was obtained through the boot and fist rather than the council chamber. It was Griffin who once reproduced a noose on the front page of his Rune magazine as a hint at what awaited their opponents when he was swept into power."

Griffin, by the way, isn't just some BNP flunky, he runs the British National party as his personal political fiefdom.

Nick Griffin has a conviction for inciting racial hatred, and has been known as a Holocaust denier.

In an article in The Rune Griffin called the Holocaust "the Holohoax" and criticized the Holocaust denier David Irving for admitting in an interview that up to four million Jews might have died in the Holocaust. Griffin apparently thought such an admission meant Irving had converted to Judaism. Griffin wrote: "True Revisionists will not be fooled by this new twist to the sorry tale of the Hoax of the Twentieth Century."

In June 1999, following the nail bombing of the Admiral Duncan pub in Soho by self-declared Nazi David Copeland, Griffin wrote “The TV footage of dozens of gay demonstrators flaunting their perversions in front of the world’s journalists showed just why so many ordinary people find these creatures so repulsive.”

Griffin may be a fascist, but he is no fool. He is out to sell the BNP.

In April 2001 Griffin spoke to the American Friends of the BNP. He said, “So, what are we now doing with the British National Party? Well we tried to simplify its message in some ways and to make it a saleable message. So it’s not white supremacy or racial civil war or anything like that, which is what we know in fact is going on, and we’re not supremacists, we’re white survivalists, even that frightens people. Four apple pie words, freedom, security, identity and democracy.”

I could go on and on but why bother. You get the drift. The Yaffers apparently think bringing an out and out fascist to town is a good idea and is a part of the "...long fought for the values that made America great."

The following is from the Michigan Messenger. I don't know who they are, but they've got some interesting articles and this is about the third time in recent weeks I've cited them.

EAST LANSING -- The Young Americans for Freedom at Michigan State University will host a speech by Nick Griffin, the head of the British National Party on October 26 at 7 p.m. according to press release on their website. No location for the speech has been announced.

The British National Party has drawn fire for allegedly being racist. The party has a platform statement which includes stopping all immigration to England.

"On current demographic trends, we, the native British people, will be an ethnic minority in our own country within sixty years. To ensure that this does not happen, and that the British people retain their homeland and identity, we call for an immediate halt to all further immigration, the immediate deportation of criminal and illegal immigrants, and the introduction of a system of voluntary resettlement whereby those immigrants who are legally here will be afforded the opportunity to return to their lands of ethnic origin assisted by a generous financial incentives both for individuals and for the countries in question."

MSU YAF was listed as a hate group by the Southern Poverty Law Center in April. Its chairman, Kyle Bristow, has been tied to the white supremacy movement and its legal advisor Jason VanDyke has been tied to the Council of Conservative Citizens, a racist outgrowth of the former White Citizens Councils.

Lions and tigers and bears, oh my!