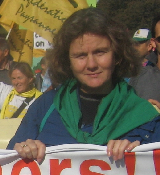 La Via Campesina is an international movement which brings together millions of peasants, small producers, landless people, rural women and agricultural workers and rural youth from around the world. It is made up of 132 member organisations active in 56 countries in Asia, Africa, Europe and the Americas.

Via Campesina farmers and farm workers, women and men, have come from Germany, France, the Basque Country, Belgium, Quebec, Austria, Norway, Nicaragua and Nepal to take part in the massive anti-G8 demonstration in Rostock. They are there to call on these world "leaders" to put an end to neoliberal policies destroying people lives and livelihoods and to implement alternatives.

La Via Campesina proposes Food Sovereignty to reverse global exploitation, global warming, and global devastations by free trade policies. Food sovereignty is the right of peoples to healthy and culturally appropriate food produced through ecologically sound and sustainable methods, and their right to define their own food and agriculture systems. It puts the aspirations and needs of those who produce, distribute and consume food at the heart of food systems and policies rather than the demands of markets and corporations.

Ingeborg Tangeraas of Via Campesina grew up in a farm in the western part of Norway. She is an educated agronomist living in Bodoe in the north of Norway. Her background is teaching, research, journalism; all connected to agriculture. Now she is working in the international youth organisation 4H, with responsibilities of city farms and youth clubs. www.4h.no. She is a member of NBS international committee and one of the two European members of the Via Campesina international coordination committee.

Yesterday she spoke in Rostock.

The following is from La Via Campesina : International Peasant Movement.

My name is Ingeborg Tangeraas (pictured here) and I am representing the small peasants union in Norway and Via Campesina international coordinating committee as a representative from Europe. Via Campesina is an international movement with millions of peasants, landless and agricultural workers – we are men, women and youth from 132 organisations in 56 countries all over the world.

How was your day? Did you all get breakfast after your sleep, did you get lunch to give you strength after your activities and will you most likely have dinner together with some friends after this event? I think you agree with me; agriculture is not only about farmers, but about food for all of us. But 854 millon people do not share this luck with us to day, but have to go to bed hungry. And 2/3 of this people are farmers and food producers.

For some decades now we have been told that free trade would put an end to hunger and poverty. We have been cheated. Transforming agrarian resources into commodities is only in the interest of transnational companies and big corporations. Corporate interests have been stealing the resources that belong to the whole humanity. With the help of the World Bank, the International Monetary Fund and the World Trade Organization, the transnational companies have been able to take over our land, our water, our seeds and now our knowledge. These companies have destroyed the resources and have created huge environmental problems.

We believe very strongly that this situation can be changed. In Via Campesina we are convinced that food sovereignty is an important part of the solution. Our movement has been struggling for food sovereignty for the past ten years.Food sovereignty is the right of the people to healthy and culturally appropriated food, produced ecologically and by sustainable ways. This means the right to choose what food we want to eat and how this food is produced. This is the right for people to define their own food and agricultural systems, and important; without harming the food production in other countries! This includes the right for countries to protect their market. This right applies for Northern as well as for Southern countries. But this totally excludes any export subsidies and other policies aiming at gaining market power abroad.

Food sovereignty is the grassroots alternative to the ongoing free trade policies. 50 percent of the population in the world are food producers. But the struggle for food sovereignty can only be won if not only farmers, but also all citizens join this struggle. Particularly in Europe, where farmers represent only a small part of the population, citizens have a key role to play in the struggle for food sovereignty. What kind of agriculture do you want? Its a highly political question and there should be a much stronger and wider debate than it is today. Where, how and by whom do you want our food to be produced? We have to decide this together! The struggle against GMOs has shown us that farmers and citizens united we can oppose the power of transnational companies. Nowaday, Austria has declared a moratorium on GMOs. We can win!

My daughter of 14 years old has showed me a t-shirt saying “If you love me, dont feed me junk”.This is a choice of civilization. All over the world, farmers are facing a massive war of destruction. Millions have to give up farming because their land are taking over by the corporations or because the agricultural prices don't allow them to make a living out of agriculture.

But we are resisting! We are struggling and achieving victories! Connecting our struggle to the ones of the workers, the ecologists and the consumers is not only necessary to achieve food sovereignty, but also to build alternatives that work for all of us. In Seattle, Cancun and Hong Kong, we, Via Campesina farmers, struggled with our allies from other social movements to put down the WTO. In Porto Alegre and Singapore, we struggled against the World Bank and the IMF with our friends. Everywhere in the world, we struggle with consumers to keep our food free of GMOs. And we are achieving victories!

We know farmers will not win alone, but we are sure with our allies we can get rid of coporate control over our lives!

Thank you all very much
Posted by Oread Daily at 4:16 PM