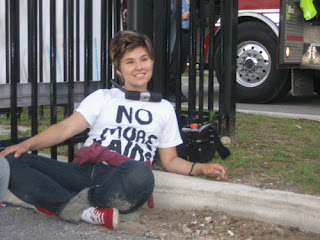 Two people were arrested after they chained themselves to the gates of the Immigration Detention Center in Houston in an immigrant protest timed to coincide with the G-8 Summit in Germany, where immigration is on the list of issues to be discussed.

To be discussed...what does that mean anyway? Who is discussing what?

The detention center in Houston is privately run and is owned by the notorious Corrections Corporation of America.

Oh yeah, in Rostock at the G-8 Summit about 1000 demonstrated outside Rostock's immigration office this morning demanding "global freedom of movement and equal rights for all," including refugees and asylum seekers.

As a sign of tribute, the demonstrators passed by a home for refugees in the Rostock-Lichtenhagen where neo-Nazis had terrorized Vietnamese asylum-seekers in 1992. In that incident event, the so-called "Sunflower House" was set on fire as neighbors stood watching.

Eventually, as expected fighting broke out between police and the protesters.

Police said by late afternoon they had made around 50 arrests.

Later in the day, nearly 10,000 demonstrators marched peacefully through the centre of the city and briefly blocked access to the immigration office. Riot police delayed the march for a few hours, demanding that masked militants remove balaclavas and empty their rucksacks of stones and potential weapons.

The following is from Houston IndyMedia yesterday.

This week the leaders of the richest and most powerful 8 countries in the world are meeting in Germany for the Group of 8 (G8) conference. During the G8 gathering these leaders will continue to strategize and promote the economic and political policy of neoliberal "globalization". These 8 nations, which compose 65% of the global economy have pushed for an economic system which impacts the whole world, making the rich richer, and impoverishing millions.

These meetings have been met with resistance from workers, youth and social movements from developing countries as well as inside rich countries, who object to the global machine that feeds on blood and defecates dollars. Today, June 4th, the Dissent! Network in Europe has called for a Global Day of Action for freedom of movement and equal rights for all! We here in Houston, Texas, USA have heard this call to action and share the same concerns as our brothers and sisters in Europe and all over the world who are taking action today in solidarity with migrants and refugees of the global economy.

Here in the United States, a rising xenophobic sentiment in large parts of the population is being fed and exploited by politicians who are scapegoating immigrants and this system that is stratifying the working class.

To this end we have chosen to commit an act of civil disobedience, blocking gates to the "Houston Processing Center"; an Immigrant Detention Facility in North Houston run by the Corrections Corporation of America (CCA). CCA is a company that turns a profit of over a billion dollars a year by administering prisons for state and federal governments. They run the notorious Don T. Hutto Facility in Taylor Texas, a converted jail that imprisons asylum seekers and children. These children are subject to inhumane treatment and ICE/CCA denied access to the United Nations Special Rapporteur on the Human Rights of Migrants this past month as he tried to investigate the conditions at the Hutto Facility. By the fall of 2007 ICE will spend an estimated 1 billion dollars a year to detain over 27,500 people. ICE operates eight Service Processing Centers and seven contract detention facilities such as Hutto, Raymondville and the Houston Processing Center, all three run by CCA.

We decided we had to put our bodies on the line in an effort to slow down and expose the oppression and exploitation of immigrants by the capitalist economic order, the US Government and the US Prison Industrial Complex. We condemn the policies of the Immigration and Customs Enforcement and the Corrections Corporation of America. We recognize this escalation of raids and deportations are not a fundamentally new development, but part of a continued effort to terrorize our communities for the sake of maintaining an unjust social order.

We stand for globalization from below; equal social, political, and cultural rights for all, and the right to freedom of movement. We want a political and economic system that puts people before profits. On June 4th we stand with oppressed people and those all over the world taking action for human freedom and against the encrouching borders between our peoples.
Posted by Oread Daily at 4:02 PM