BIG BROTHER HAS AN EYE ON ARIVACA, ARIZONA 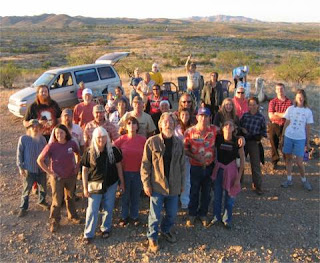 In November of 2005 the Department of Homeland Security (DHS) established the Secure Border Initiative (SBI) and in September of 2006 the Boeing Company was awarded the contract to design and implement the SBInet, a multiyear program that will use the latest in technology and strategies to attempt to secure America’s borders. All this was interesting news coming from a place far from southern Arizona. But then “Project 28” appeared and Arivaca found itself in the middle of a major trial of the entire border strategy. And this hilltop was ground zero.

The Bush administration's high-tech plan to use a "virtual fence" to stop illegal immigration had come to Arivaca, Arizona...and it wasn't welcome by all (some of whom are pictured here).

One of nine 98-foot towers, equipped with long-range cameras, radar and night vision, has been erected on the outskirts of town. For the people of Arivaca, the towers represent one more sign of the militarization of the border, which is 11 miles south of town.

Residents of the town have been quoted as understanding why immigrants cross the border looking for jobs. "I can't blame the little guys who are coming in. They get taken advantage of. The way I see it, it's another slave trade," said rancher Rob Kasulaitis.

Anyway, no one asked them what they thought about having cameras following them around every hour of every day.

"It's so close . . . that we feel like we're under the scope of the cameras and the radar units and the night-vision cameras, and that's troubling to the people here," Roger Beal, owner of Arivaca Mercantile, the town's only grocery store told the Washington Post. "It's like having an unwanted family member in your life all the time."

At the last meeting, on May 15th, we were told that Project 28 and the location of the "Arivaca Tower" were a done-deal, and the tower would not be moved unless "proven ineffective". Tower construction started Monday, May 21st, and as of May 24th, the tower was up but not operational. The site is currently guarded 24/7 by Pinkerton guards. Once it is operational, we look forward to proving it ineffective by using our recreational lands in its immediate vicinity. Just a mile and a half from Main Street, it's a perfect place to hike, bike, birdwatch, target practice, picnic, and hold drumming ceremonies on the sacred space it abuts. Let's have some fun!

Last month an editorial in the Arizona Republic touched on the issue with a bit more than subtle sarcasm:

...billions spent in Mexico -through microloans, for example, to avoid feeding Mexico's institutional corruption - would do more to stem illegal immigration than the biggest wall ever built.

Instead, we have the Secure Border Initiative, Homeland Security's multiyear, multibillion-dollar program. Last year, Richard Skinner, inspector general for Homeland Security, put the price tag for electronic monitoring of the border at $30 billion. Physical barriers would cost an additional $7 billion, he said.

If you've ever had an estimate for a home-improvement project, you know those price tags are going to go up, up and up.

Our fearless leader, George Bush, invited military contractors such as Lockheed Martin, Raytheon, Northrop Grumman and Boeing to bid on the creation of a "virtual fence" that would include unmanned aerial vehicles, ground surveillance motion-detection equipment and all sorts of other whiz-bang stuff.

Boeing Co. got a contract last September to begin a virtual fence in Arizona. Earlier this month, residents of the Arizona border town of Arivaca (population 1,500) packed public meetings to oppose the 98-foot towers on which Boeing will mount cameras and radar.

It will be "like living in a prison yard," one resident told a reporter. Big Brother was also mentioned.

The following is from Tuscon's KVOA.

The Border Patrol says it'll serve as an extra set of eyes and ears for its agents. But residents who live near one of the towers worry these surveillance towers will have more of a negative than positive impact.

The Border Patrol says the towers will help detect illegal border crossers. But Arivaca residents see them as eyesores that invade their privacy. Saturday night they gathered near one of the structures to make their point.

About 60 people joined hands to protest Arivaca's tower. They sang and spoke out in hopes the tower's surveillance equipment would record them and send their message to the Border Patrol and the builder Boeing.

C Hues, an Arivaca resident and protest organizer, says, "If that tower is working properly, it should be able to film us, there are cameras in it, there are speakers. That would give us a chance, to finally talk to at least, to give our concerns and complaints and our feelings."

This is opponents' fifth protest meeting. So far they believe their concerns have been ignored.

Ellen Dursema says, "Each of us are putting our intention out there and it will join with all our other intentions and it will be strong, very strong."

The tower is one of 9 that will be positioned along 28 miles of the Arizona Mexico border as part of a pilot project called "Project 28."

Phil Benoit, who lives in Arivaca, believes that's an invasion of his privacy. Benoit says, "It's a clear violation of the Fourth Amendment. We have the right to wander around and not be searched without probable cause and this thing is constantly searching us."

Eric Heesacker doesn't understand why it's here. He says, "It's located 13 miles north of the border that it's intended to protect. It's a boondoggle for the government."

The Department of Homeland Security does not agree. It says, if the towers work, its plan is to erect a trail of them along the entire Mexican and Canadian borders.
Posted by Oread Daily at 1:43 PM