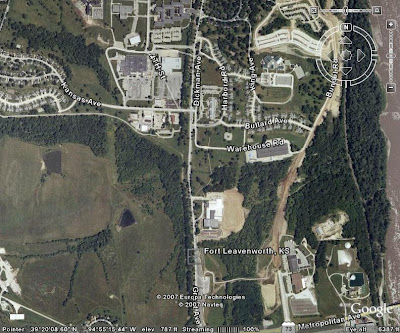 A religious freedom advocate is threatening to sue the Army and others over charges that it posted anti-Semitic materials on a chaplains' Web site at Fort Leavenworth.

According to a press release from the Military Religious Freedom Foundation military chaplains have been holding Bible classes for US soldiers using study guides that appear to be anti-Semitic.

In one of the study guides, Galatians, posted on the Fort Leavenworth chaplain web site, the materials refer to Jews as "Judiazers" and claim that "the Judiazers were zealous people much like the zealous Moslems have become today."

"The Judaizers attempted to destroy the two foundations of the Christian religion: a. The Grace of God, and b. The Death of Christ," the Galtatian study guide says, adding that Judaism is a religion of "bondage" and Christianity a religion of "freedom."

In the 14-page study guide Nehemiah, chaplains discuss a portion of the Sanballat, the first high priest of the temple at Samaria, who, according to the Bible study, had to deal with a "Jewish problem." He mocked the Jews' efforts to rebuild the walls of Jerusalem in the hopes that they would give up.

The study guide then poses the following questions for soldiers: "How do you interpret Sanballat's reaction to the Jews progress? Anxiety and fear? In light of what we know about the Jews performance today, were his fears reasonable?"

Mikey Weinstein, the founder of the Military Religious Freedom Foundation, says the religious teachings are not only blatantly anti-Semitic, but he believes disseminating it over the Internet tramples upon the Constitution.

"It's illegal for an arm of the federal government to push this ideology," Weinstein, who is Jewish, said in an interview. "This is the official web site of the US Army, and this is here for everyone to see. Anyone would easily come away with the belief that the US Army endorses these teachings. The last time someone talked about a Jewish problem the way these chaplains are talking about it was in Europe in the 1930s. What these Bible teachings say to me or to anyone participating in these classes is that the US government loves the military but Jews are bad."

"The rise of evangelical Christianity inside the military went on steroids after 9/11 under this administration and this White House," Weinstein said in an interview. "This administration has turned the entire Department of Defense into a faith-based initiative."

TOPEKA, Kansas — The founder of the Military Religious Freedom Foundation is threatening a lawsuit against the U.S. military over what he says are anti-Semitic materials on a Fort Leavenworth Web site.

Three Bible study lessons on the post chaplain’s Web site pushed Christianity and blamed Jews for acts of terrorism, including the crucifixion of Jesus and the persecution of other early Christian leaders, said Michael Weinstein.

His foundation calls itself a watchdog group for expanding religious freedom in the U.S. military.

Weinstein said the materials, which were removed after he and others complained, were an example of a larger problem. He said a lawsuit is necessary to stop “widespread” violations of religious freedom in the military.

“It is all over the U.S. military,” Weinstein said. “We are going to have to do this, because letter writing and phone calls aren’t enough.”

Fort Leavenworth is home of the Army’s Combined Army Center, including the Command and General Staff College, where hundreds of officers receive formal training each year. It also is home to many schools and centers that are intricately involved in the writing of doctrine related to the fighting in Iraq and Afghanistan.

Lt. Gen. David Petraeus commanded the post before he was chosen by President Bush earlier this year to lead coalition forces in Iraq.

Janet Wray, spokeswoman at Fort Leavenworth, said the chaplain’s Web site had been taken down and officials were assessing the materials. She said Fort Leavenworth officials planned to issue a statement later in the day.

Officials at the Department of Army headquarters had no immediate comment.
Posted by Oread Daily at 3:33 PM

Buzz Flash had a very interesting interview with Weinstein a couple of days ago. It's worth reading.llzejsv