NEWS OF THE INDIGENOUS INTERCONTINENTAL CONFERENCE FOR 2007 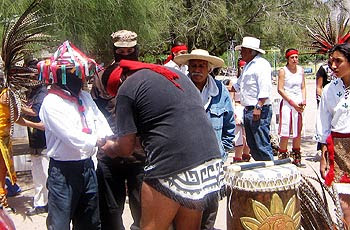 The Zapatista movement has put an Indigenous Intercontinental Conference on the table for later this year. The news comes out of a gathering in Mexico just concluded. The gathering included amongst others indigenous representatives from tribes in Sonora, Mexico and tribal members from Arizona Indian tribes. On hand were O’odham from Sonora, Yaqui from Rio Yaqui, Sonora, Mayo from Sinoloa and Raramuri from Chihuahua in Mexico. Coming from the United States were O’odham, O’otham, Navajo, Apache and Hopi.

Subcomandante Marcos said he hopes the Intercontinental gathering will “touch the hearts and recuperate the souls” of Indigenous people struggling throughout the continents. “When Indigenous Peoples come together from all regions, they will realize that money means nothing when compared to the values of Indigenous Peoples.”

The declaration for the Indigenous Intercontinental Conference, signed April 22, states that it has been 515 years since the invasion of ancient Indigenous territories and the onslaught of the war of conquest, spoils and capitalist exploitation.

The press conference where the announcment was made was held at the Rancho Penasco, biodiversity ranch, 11 kilometers south of Magdalena, on the main highway to Hermosillo. Magdalena is less than a two-hour drive south of Nogales, Ariz..

The following announcement and story is from the Narco News.

Zapatistas Select Yaqui to Host Intercontinental Summit in Mexico
Indigenous Representatives from All América, and the World, to Gather October 11-14 near Guaymas, Sonora
By Brenda Norrell
Special to The Narco News Bulletin

The Intercontinental gathering will be held in the Yaqui community of Vicam in Rio Yaqui, Sonora, on the northwest coast, Oct. 11 – 14, 2007.

“At this moment, we want to let the Indigenous Peoples of Mexico, Canada, the United States, Central America, South America and the whole world know what we are planning,” Comandante David said in an interview here, speaking in Spanish.

“The object of this meeting is to meet one another and to come to know one another’s pains and sufferings. It is to share our experiences, because each tribe is different.”

“The answers will come in the gathering as we talk with one mind and one heart. Our brothers and sisters will be together, speaking to one another with one heart,” Chavez said in an interview.

The declaration for the Indigenous Intercontinental Conference, signed April 22, states that it has been 515 years since the invasion of ancient Indigenous territories and the onslaught of the war of conquest, spoils and capitalist exploitation.

The Indigenous struggle was uplifted by the emergence of the EZLN, Zapatista Army of National Liberation, in the year of 1994.

The national governments of the Americas have always sought to divide Indigenous communities through the establishment of borders, reservations and legislation to fragment and neutralize Native efforts of autonomy.

However, with unity and knowledge, the struggle for liberation will be strengthened. This struggle must be known to the world, so that all people who are honest in the fight for democracy and freedom will become companions in the struggle, the declaration states.

Marcos, speaking of the need to arise in defense of Mother Earth, told Indigenous gathered here of his recent trip to support the fishing rights of the Cucapa and Kiliwa Peoples in Baja California, Mexico.

Marcos spoke of the assault on Indigenous Peoples in the Americas by corporations and governments. Holding an eagle feather given to him by the Kiliwa, Marcos said the eagle, like the Kiliwa, are at risk of becoming extinct.

Marcos held private meetings with Indigenous to organize the intercontinental conference and listen to concerns of Indigenous Peoples from different regions of Mexico and the United States.

Sharing concerns over environmental damage, hazardous dumps and the loss of languages, lands, traditions and culture were O’odham from Sonora, Yaqui from Rio Yaqui, Sonora, Mayo from Sinoloa and Raramuri from Chihuahua in Mexico. Coming from the United States were O’odham, O’otham, Navajo, Apache and Hopi.

At the heart of this gathering was the outdoor kitchen with two roaring fires, where Yaqui, O’odham and Mayo women prepared Sonoran tortillas and huge pots of soups, beef and beans. O’otham from Salt River in Arizona brought buffalo meat. Zapatista youths from Tucson, Ariz., brought chocolate cakes and others brought watermelons, papayas and pineapples.

The American Indian Movement provided security at the planning session, with AIM security guards around the clock at the entrance gate. Closer to the highway, there were up to a dozen vehicles of local and federal Mexican police and undercover officers.

Although Mexican police attempted to intimidate Indigenous Peoples by questioning them when they arrived, AIM security demanded the police halt the intimidation, which they did. While traveling in northwest Mexico, undercover police continuously followed Marcos and the Comandantes.

Marcos first came to Rancho el Penasco, south of Magdalena, in October of 2006, for the listening session with O’odham during the Other Campaign. Marcos and 10 Comandantes returned on April 8 enroute to the Cucapa Peace Camp to uphold fishing rights. Marcos and members of the Zapatista delegation returned for the Intercontinental summit planning session here April 21 –22.

With its flock of sheep and historical memorabilia, the biodiversity ranch, with a hotel/hostel and campground, have been made available to the Zapatistas by the owner.
Posted by Oread Daily at 1:58 PM