COCA FARMERS SQUARE OFF WITH POLICE 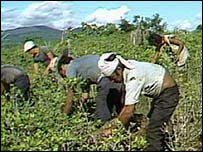 Coca farmers and Peruvian police are facing off again this week. The farmers are essentially fighting for their very right to live.

Militancy amongst Peruvian coca growers is a direct response to the eradication policies of President Alan Garcia, who has pledged to wipe out narco-trafficking through Colombia style military-chemical means. Now, he is even resurrecting the Shining Path movement, at least rhetorically, tarnishing protesters against his policies with a terrorist brush.

Several hundred thousand Peruvian peasants are making a living -- but not much of one -- by growing coca.

"We cocaleros are people who live in extreme poverty and we have to grow the sacred leaf to survive," said Nelson Palomino, head of the country's largest coca grower union, the National Confederation of Agricultural Producers of the Coca Valleys (CONCPACCP). "We are honest, hard-working Peruvians, and we are not guilty of anything for growing the coca plant to subsist," he told Drug War Chronicle during a meeting in Lima, chewing coca leaves as he spoke. "What are we to do? Alternative development has failed. The foreign money that is supposed to come to the valleys goes into the pockets of functionaries in Lima," Palomino complained. "We hope the world will understand that our intentions are good."

"Coca is our culture; coca is Peru," Palomino said fiercely. "To talk about coca is to talk about health. The coca needs to go for medicine, food, and other uses. Why can't the rest of the world accept this? The coca plant contains many alkaloids. While some are bad, others are good, and we worry that your country does not know about the good side of coca. We need for the American press, the American Congress to know this information."

"The NGOs and the government are vampires," said Abdon Flores Huaman, secretary of the cocalero defense organization the Federation of Agriculture Producers of the Valleys of the Apurimac and Ene Rivers (VRAE), as he was interviewed in the CONCPACCP office in nearby Kimbiri on the banks of the rain-swollen Apurimac River. "They use our names to gain support for their so-called alternative development projects, but only 10% to 15% of those resources actually reach us," he claimed. "What we want is to get rid of these intermediaries that prey on us and get direct support for our local and regional authorities and directly to the campesinos, too. Our unions can play a role in this."

The following is from the web site Living in Peru.

Civil unrest breaks out between Peru's coca farmers and police

Peru's coca farmers are back at it again. This time coca farmers from Peru's San Martin jungle region tangled with police authorities as they attempted to remove road blocks erected by the striking farmers.

According to a report in Peru 21, at least four major area roads, including the Huanuco-Tingo Maria Highway, have been blocked by protesters who are demanding the end to government sponsored eradication efforts.

Reports in the Peruvian media say some coca farmers have been protesting since 2:00 a.m. this morning, leaving many travelers stranded alongside blocked highways.

Just this afternoon, as law enforcement authorities attempted to reestablish order by removing rocks, sticks, and burning tires from the Huanuco-Tingo Maria Highway, a group of protesters frustrated their efforts by throwing rocks and physically attacking officers.

Peru's RPP Radio reports that at least two people have been seriously injured in the altercation. They have been transported to the Hermilio Valdizan hospital in Huanuco.

Peru's coca farmer representatives are blaming Peruvian President Alan Garcia and Prime Minister Jorge Del Castillo for not meeting their demands when they had the opportunity to do so.

"We civilly wanted to avoid all types of social costs. Now, the masses (of coca farmers) are acting out on their convictions," commented coca farmer representative Eduardo Ticeran.

Yesterday, conversations between both parties were abandoned by Huanuco coca farmers who walked out on the talks due to the government's persistence in continuing eradication efforts during the talks.
Posted by Oread Daily at 4:38 PM