THEY DON'T CALL IT A PAPAL BULL FOR NOTHING 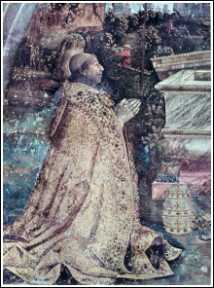 Twenty-three organizations and 100 individuals signed a resolution late last week at the Summit of Indigenous Nations at Bear Butte. The resolution, which will be sent to the Vatican for review, targets the Papal Bull Inter Caetera of 1493, in which Vatican officials urged Christopher Columbus to convert indigenous Americans to Catholicism (to put it very nicely).

An earlier Papal Bull is also targeted along with a 1496 British Royal Charter.

The papal bulls, still stand after more than 500 years and are the basis for ongoing patterns of subjugation that have been incorporated into federal Indian laws.

Also included is a 1452 decree issued by Pope Nicholas V which called upon Portugese King Alfonso "to invade, search out, capture, vanquish and subdue all Saracens and pagans,... and other enemies of Christ." Pope Nicholas also directed that the land and possessions of these people be taken away and that non-Christians be "reduced to perpetual slavery."

This document was followed by the 1493 Inter Cetera papal bull, issued by Pope Alexander VI, which decreed the pope's desire that "barbarous nations be overthrown" and those nations "discovered" be subjugated and reduced to the Catholic faith "to propogate the Christian religion." These decrees set the stage for 500 years of advocating warfare, rather than peace, against Native peoples and made it impossible for the Christian world to respect Native Nations of the Western hemisphere, he said.

These ancient doctrines serve as the foundation of federal Indian policy that denies Indian people their rights to ancestral homelands because they were not Christians when the Europeans first arrived.

"These ancient laws of Christendom were incorporated into an 1823 Supreme Court decision, Johnson v. McIntosh, which made a distinction between Christians and heathens," Steven Newcomb of the Indigenous Law Institute said during a panal discussion held at the Parliament of World Religions more than a decade ago. The term "heathen," he noted, was applied to persons whose religions were neither Christian, Jewish, or Moslem, which, of course, meant virtually all Native peoples.

"Why this is so critically important to Native people in the U.S., and to indigenous peoples (everywhere), is that in Johnson v. Mclntosh, the reasoning of the court was based upon a distinction between Christians and heathens, and the Doctrine of Discovery was formally written into the laws of the United States by the Supreme Court," he said.

"It said that the first Christian nation to 'discover' a land of heathens and infidels (beasts of prey) had the ultimate domination over those lands and that heathens only have right of occupancy."

In the Johnson v. McIntosh decision, Chief Justice John Marshall cited various charters of England to document acceptance of the Doctrines of Discovery and said European nations making such discoveries only had a legal obligation to recognize the "prior tide of any Christian people who may have made a previous discovery," according to Newcomb's research.

"In short, Christians had title, heathens only had occupancy," he said. "Few people realize that the U.S. Supreme Court's Christian/heathen distinction is still the Supreme Law of the land today."

"On that basis, the U.S. continues to deny that Indian people have a true right of property in their own ancestral homelands and that they have rights to complete sovereignty as independent nations."

“It is with much honor that I put my hand on this instrument,” Dennis Banks of the American Indian Movement said as he signed the resolution last week. “It’s at least part of a solution. It’s step one ... to pass this moment on to the next generation so they bear witness and we begin a new day.”

PHOENIX - Indigenous in the Americas are demanding that the ''doctrines of discovery,'' the papal bulls that led to the seizure of American Indian homelands, be rescinded.

At the Summit of Indigenous Nations on Bear Butte in South Dakota, delegations of indigenous nations and nongovernmental organizations passed a strongly worded resolution condemning the historical use of the doctrine of discovery as an instrument of genocide.

Tupac Enrique Acosta, coordinator at Tonatierra in Phoenix, said the effort at Bear Butte continues the indigenous battle to halt genocide of indigenous peoples and seizures of their homelands in the Americas.

Tonatierra was among the organizations at the Summit of Indigenous Nations taking action to rescind the doctrines of discovery: Papal Bull Inter Caetera of 1493 and the 1496 Royal Charter of the Church of England.

''The Indigenous Nations have resolved, here at the base of Mato Paha [Bear Butte], that the Pope of the Catholic Church and the Queen of England and the Archbishop of Canterbury rescind these doctrines of discovery for having served to justify and pave the way for the illegal dispossession of aboriginal land title and the subjugation of non-Christian peoples to the present day,'' according to the summit's statement.

Forty delegations of indigenous spiritual and political leaders, as well as NGOs, signed the resolution.

''These papal bulls have been the basis for the extinguishment of aboriginal land title and the subjugation of indigenous peoples of Abya Yala [North and South America]. The implementation of the papal bulls evolved in the United States through the Supreme Court decision of Johnson v. M'Intosh [1823] which established the precedent for the denial of aboriginal title to American Indian lands in the United States,'' according to the summit.

''It has been resolved by 23 Nations and NGO's and 100 individual signatories that the 'Doctrine of Discovery' is a legal and political fiction in violation of the rights of indigenous peoples and intellectual act of oppression which continues to serve to suppress and repress the indigenous peoples in the Western Hemisphere.''

From Ecuador at the Bear Butte gathering was Santiago Delacruz, vice president of CONAIE (Confederacion de Nacionalidades Indigenas del Ecuador/Confederation of Indigenous Nationalities of Ecuador). CONAIE is a formation of 28 indigenous nationalities and Pueblos of Ecuador.

''We have come from the southern part of this continent Abya Yala which we share with you all as indigenous nations of this hemisphere on a mission to strengthen and re-establish our ancestral ties as a continental confederation of nations and pueblos,'' he said.

Delacruz offered support for rescinding the papal bulls and support from the south for the protection of Bear Butte.

''It is with great concern that we have come to be informed of the threatened desecration of the Sacred Mato Paha, also known as Bear Butte, where we now gathered in summit as indigenous nations.

''This sacred area must not be allowed to be destroyed or desecrated by the proposed construction projects of 'biker bars' and the like,'' Delacruz said.

Enrique pointed out that the current demand that the papal bulls be eliminated represents a longtime global effort.

The proclamation stated, ''That the Papal Bull Inter Caetera of Pope Alexander VI is hereby annulled, as well as whatever Doctrine of Discovery proceeding from which that pretends to deform the relationship of Harmony, Justice, and Peace of we the Indigenous Peoples of Humanity in its entirety.''

And earlier, at the United Nations in Geneva on Aug. 1, 1991, indigenous delegates discussing the Universal Declaration of the Rights of Indigenous Peoples, convened by the Working Group on Indigenous People, also issued a statement to then-Pope John Paul II, chief of the Vatican.

The 1991 declaration stated, ''We demand from the Vatican state a denunciation of the unilateral treaty of Pope Alexander VI (Tordesillas) as being contrary to the Universal Human Rights of Peoples.

''Whereas the year 1993 completes 500 years of a supposed spiritual conquest without clear rectification of this universal injustice, allowing the nation-states that have benefited from the inheritance of Pope Alejandro VI to continue programmes of genocide and ethnocide, denying the indigenous people the recuperation of a harmony based on reciprocal human respect, we demand that the Papal Bull of May 3, 4, 1493 Inter Cetera be annulled.''

The Summit of Indigenous Nations was called in response to the development of several new biker venues located within five miles of the base of Bear Butte, near the Black Hills Mountains.

Pope Benedict should indeed rescind the Bull, and give back to the Indian the God given rights to worship and live as he wishes.The Bull was wrong and their where many of the Religious Orders strove to have the Native Indians their rights to their land and way of living. It is long over due...