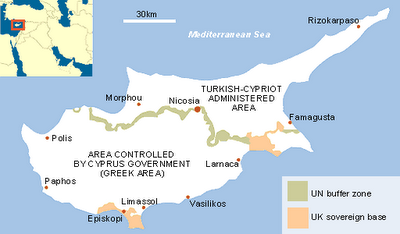 In case you thought there just couldn't be any more trouble spots left in the world, think again.

Turkey and France are engaged in a diplomatic tussle over Cyprus. France has been discussing a new "military cooperation" agreements with Cyprus.

In fact, military cooperation between France and Southern Cyprus was decided on last week at a meeting in Nicosia between French Defense Minister Michele Alliot-Marie and South Cypriot leader Tasos Papadopoulos. A message asking permission to build a French military base on the island was reportedly delivered by the French minister of defense to Papadopouos from French President Jacques Chirac.

Details of the agreement between the two countries will be worked out in the coming month, with ministers and leaders from the two countries expected to sign a formal treaty sometime during September in Paris. Until now, Southern Cyprus has only ever had a military cooperation agreement with Greece.

----The ability to provide logistical support for future operations in the Middle East, such as sending troops in to held along the border between Lebanon and Israel.

----Distance from the threat of groups like Hizbollah, while maintaining proximity to all Middle Eastern countries.

----The ability to become a more active participant in the turbulent developments of the eastern Mediterranean.

----The permission to use other military and air bases in Southern Cyprus.

And what will Southern or Greek Cyprus gain?

----Despite the military embargo implemented against Southern Cyprus, the Southern Cypriot army will be able to gain advanced technology weapons from the French.

----The French army will provide military training for the Southern Cypriot army.

----France is expected to support Southern Cyprus in its quest to join in certain international organizations that it has thus far been barred from.

This would be the first real agreement ever signed between Southern Cyprus and any country but Greece.

''As you know, security issues in Cyprus are based on international agreements. On the other hand, the Greek Cypriot administration can not make commitments on behalf of the whole island of Cyprus. We hope that all parties will act responsibly in this very sensitive issue (of military cooperation),'' stressed Tan.

The following article is from the Turkish Daily News.

Turkey has told France that Greek Cyprus is not authorized under international agreements to make treaty commitments on behalf of the entire island, in a quiet diplomacy aimed at warding off possible tension with Paris on yet another Cyprus-related rift.

Diplomatic sources said Turkey has expressed its position to France, cautioning Paris that security issues are regulated by international agreements and that these agreements do not allow the Greek Cypriot administration to sign agreements of any sort with another country on behalf of the entire island.

But the same sources also warned against talk of a crisis between Ankara and Paris at this stage since French-Greek Cypriot talks are still continuing and that terms of the military cooperation agreement are yet to be defined.

For France, the agreement is meant to “formalize” an existing military cooperation with Greek Cyprus, not to introduce new elements of cooperation.

“There is no clear consensus yet. We don't know what the agreement will look like in the end,” said one source, adding that the recent reports in the Greek Cypriot press suggesting that the agreement would involve cooperation in a number of areas, including use by the French of the Andreas Papandreou air base in Paphos, are “exaggerated.”

The Greek Cypriot reports have said the proposed military cooperation agreement is set to include use of military facilities, technical support and education and training of Cypriot national guardsmen in France, as well as joint military exercises.

Reacting to the reports, Foreign Ministry spokesman Namık Tan said last week that the security issues involving military matters are regulated by international agreements. He also said that the Greek Cypriot administration is not allowed to make commitments on any issue on behalf of the entire island.

“We hope the parties concerned will act in a manner heeding the sensitivity of the matter,” Tan then said.

Turkey has guarantorship rights under the 1960 Treaty of Guarantee. It does not recognize the Greek Cypriot administration and recognizes the Turkish Republic of Northern Cyprus (KKTC), which lacks international recognition, in the north of the island.

Greek Cypriot newspapers commented that the agreement was motivated by a French desire to play greater role in the Middle East by acquiring a base near the region and to deepen its military ties with the island as part of its strategy to develop a strong European military network.

According to the reports, details of the proposed agreement were discussed during a visit to Greek Cyprus last month by French Defense Minister Michele Alliot-Marie, who observed the evacuation of French nationals from Lebanon by warships of the French navy.

French military helicopters have used the Paphos base for Lebanon evacuation flights, in addition to the facilities of the nearby British Akrotiri base. France is already cooperating with the British bases on the island and works with their naval and special task forces

But the agreement, independent of its specific terms, may still stir tension between Ankara and Paris. If signed, the agreement will be the first such deal the Greek Cypriots sign with a country other than Greece.

Relations between Turkey and France were strained last year when Paris made recognition of the Greek Cypriot administration a condition for opening accession negotiations with European Union candidate Turkey.

Any tension in ties over the proposed military deal with Greek Cyprus may further complicate relations in autumn, when both the agreement is expected to be finalized and Turkey is set to come under EU pressure to open its ports and airports to traffic from member Greek Cyprus.
Posted by Oread Daily at 3:05 PM