MEXICO: ON THE BRINK? 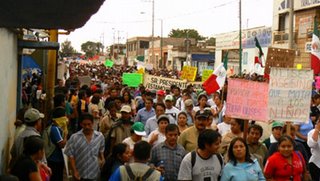 Protesters have taken over the center of folkloric Oaxaca. Police are nowhere in sight. Since the attack on teachers by police on June 14, Oaxaca has
been in a state of civil rebellion, Two weeks ago,the Popular Assembly of the People of Oaxaca (APPO, by its Spanish initials) declared itself the governing body of Oaxaca. The Popular Assembly (which formed in June) convened representatives of Oaxaca’s state regions and municipalities, unions, non-governmental organizations, social organizations, cooperatives, and parents. APPO is urging everyone to organize popular assemblies at every level: neighborhoods, street blocks, unions, and towns. “No leader is going to solve our problems,” members of APPO repeat.

According to Narco News, the Popular Assembly of Oaxaca "aims at nothing less than expanding the traditional idea of general assemblies of citizens to form a new state government. Such assemblies, under usos y costumbres, oversee the execution of their resolutions by their municipal authorities. That is to say, 'the executive branch' (the authorities) is charged with accomplishing the tasks the assembly gives it. The municipal president, foremost among the authorities, leads (as the Zapatistas’ phrase explains) by obeying."

"For the population of Oaxaca, the idea of governing by consensus remains part of the common cultural heritage. Therefore, as APPO was convoked, the modest people who comprise 80% of Oaxaca’s population, recognized it immediately. And they support it, despite the obvious difficulties of convening authorities from around the state. Since these authorities receive no pay, a trip to the capital city is not easy. But it’s happening."

The rising tide of popular movements in southern states which include Oaxaca may also provide support to those contesting the recent presidential election. Although the popular movements are more radical than the "defeated" candidate, there are growing indications that they could view the "election fight" as one front of their battle.

Prensa Latina reports AMLO ratified his stance in an interview on Friday, describing the July 2 elections as a fraud and condemning the triumphant seizure of power by governing candidate Felipe Calderon, of the National Action Party (PAN).

"Vote recount is the best for the nation," noted ANLO, who buttressed his request by producing 21 packages of 30,000 votes with alleged arithmetic errors.

He said his coalition possesses evidence of errors in 50,000 polling booths, although there are indications of 72,000, accounting for nearly 1.5 million votes.

For further background from the Oread Daily go to http://oreaddaily.blogspot.com/2006/06/teachers-fight-repression-in-oaxaca.html.

The following article is from The Agonist (originally from the Christian Science Monitor).

Recent unrest in the heartland of southern Mexico could merge with leftist candidate's call to press for vote-by-vote recount.

When leftist candidate Andrés Manuel López Obrador this week called for a wave of civil resistance to press for a vote-by-vote recount of the disputed July 2 presidential election, nowhere did his appeal resonate more than in the restive city of Oaxaca.

A variety of groups, mostly leftist, have recently launched a series of protests in Oaxaca - transforming an annual teacher strike into a massive people's movement aimed at ousting the state governor. The city's main plaza has been a sea of tents and tarps, manned day and night. The windows of the government palace are shattered .

Observers say demonstrations here have primed the area to be a hotbed of pro-Obrador protest if the people ultimately feel the election was stolen, and that what happens here in coming days and weeks will be a good indicator of whether Obrador's call for resistance will gain much traction beyond Mexico City.

"This is a region that is excited about the fact that maybe there will be a president who cares about the southern states, and [a region that] would be willing to be quite militant [to defend Obrador]," says Chuck Collins, an Oaxaca-based scholar with the Institute for Policy Studies in Washington. "If there was a call to shut down the state of Oaxaca, it would just be like rolling out of bed."

Obrador has refused to concede defeat to Felipe Calderón of the National Action Party (PAN), who won the election by a little more than half a percentage point, alleging ballot stuffing and illegal support for the PAN on the part of the government and businesses. The electoral court is currently reviewing those appeals, and has until Sept. 6 to certify a winner.

At a massive rally Sunday in Mexico City, which organizers say over a million supporters attended, Obrador told the crowd: "To defend democracy, we are going to begin peaceful civil resistance." He says he wants to double the crowd at another rally scheduled for July 30, and has said he will continue calling for protests until a vote-by-vote recount is undertaken.

The goals of Oaxaca's multiparty movement are distinct from the national election. "We are not following the PRD," says Florentino López Martinez, a member of the Popular Assembly of the People of Oaxaca (APPO), the name given to the 350-some organizations that he says have mobilized alongside the teacher strike in Oaxaca. "But we would see [fighting against fraud] as necessary to defend the people's will, and the people's vote. We have a necessity to participate, to take to the streets and say no to fraud."

For the protest-weary in Oaxaca, who fear the city could become an extended outpost of political resistance, such calls are unwelcome. "They have the same ideologies and are impassioning each other," says Blanca Leon, as she swept the sidewalk outside her tiny convenience store just blocks from the staging area of the protest. "One thing provokes the other. It is not a coincidence that the strike is so big this year and that the election is contested."

Protesters in Oaxaca have blocked local buses and highways. This week, the city's biggest tourist event, the Guelaguetza festival celebrating indigenous culture, was canceled due to fears of violence.

The teacher strike on the part of the 70,000-member teacher union in Oaxaca has been an annual ritual for the past 26 years: teachers stage a protest in the city center, make demands on issues such as pay raises, negotiate with the state government, and leave within a few weeks, locals say.

But this year Governor Ulises Ruiz of the long-ruling Institutional Revolutionary Party (PRI) ordered state police June 14 to displace the teachers, which they reportedly did using tear gas. Many groups then joined forces to demand his resignation, and marches have drawn hundreds of thousands of sympathizers.

Experts agree the movement played a decisive role in the July 2 vote, as they banded together to vote against the PRI, contributing to its stunning loss in a traditional stronghold. Of 11 districts across the state, the PRI lost nine. But Gloria Zafra, a sociologist at the Benito Juarez Autonomous University in Oaxaca, says their role ends there. "The PRD benefited from their movement, but [Oaxaca's protesters] are more against the PRI than supporters of the PRD," she says. "They are busy trying to overthrow Ruiz."

In fact, only a fraction of the bellicose signs and graffiti splayed across colonial-style buildings here make reference to the presidential election.

Still, members of the movement say they will support a recount. "We respect the people's will and [electoral] transparency," says Daniel Rosas Romero, the spokesman for the teachers' union.

"[Obrador] won, and we will demonstrate that in the south and southeast of the country where citizens have been marginalized," says Tomas Basaldu, the president of the PRD's state committee.

For many supporters of a recount, the power of the people's voice in Oaxaca has given them hope. "The teacher's movement has already gotten stronger. If anyone can lead a protest to recount, it is the teachers," says Carlos Maya, an agave farmer from the outskirts of Oaxaca. "But," he adds, "maybe the people here are getting sick of the protests."

"No," interrupts his colleague Santiago Lucas. "What the people are sick of is bad government."
Posted by Oread Daily at 1:37 PM